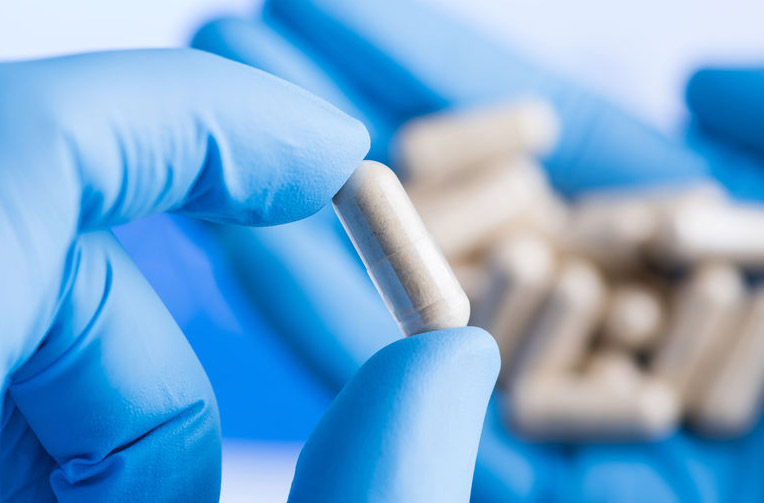 Now that you’ve seen what nootropics can do, and the best nootropic formulas on the market. Let’s take a closer look at some of the best individual nootropics, or also called nootropic ingredients.

Citicoline is arguably the best nootropic ingredient overall. It boosts mental energy and brain health across the board.

This nutrient may be most well-known as a safe and clean mental booster. It energizes your brain on a cellular level by optimizing brain cells’ mitochondria.

The result? Increased mental alertness without the energy “crash” of caffeine.

A human study found that Citicoline can boost brain energy metabolism by 13.6% and speed up brain cell creation by a whopping 26%. (1)

In terms of long-term benefits of Citicoline, studies have shown that it may help with (2, 3, 4):

Additionally, human trials show that Citicoline (in the form of Cognizin®) can help boost cognitive performance linked to focus and attention.

In this particular study, people were split into three groups:

The results showed that Cognizin was linked to higher test scores, with 500mg providing more benefit than the lower dose. (3)

In addition to enhancing your day to day function, Citicoline also supports brain regeneration. And so it helps with brain health in the long-run as well.

The best type of Citicoline for nootropic purposes is Cognizin® – a branded, premium form of 99% pure Citicoline made naturally and backed by robust clinical trials.

Bacopa Monnieri is arguably the best nootropic for learning and long-term memory. Numerous studies confirm this.

How does Bacopa achieve these effects? It’s by increasing dendrite growth in your brain. Dendrites are small connecting points through which your brain cells communicate.

The more developed your dendrite branching is, the better the communication between your neurons.

However, you need to take Bacopa for at least 6 weeks, and in doses higher than 150mg to start noticing its benefits. The full effects set in after 12 weeks.

But once Bacopa’s effects have fully set in, they tend to last for a while – even after stopping supplementation. (16)

The best type of Bacopa extract is that with a large percentage of its active compounds (Bacosides). You’ll typically see the top supplements using Bacopa Extract that contains 9 bioactive Bacosides, which is the ideal number.

Rhodiola works on your brain’s 5-HT receptors which regulate serotonin production. This makes Rhodiola a powerful mood booster – in some cases, on a similar level as antidepressant drugs.

Rhodiola is a must-have in any kind of performance-enhancing supplement. Its powerful adaptogenic bioactivities are shown to inhibit stress hormones from doing damage to your body and mind.

Rhodiola’s effects on your serotonin and dopamine receptors can improve your focus ability, improve mental performance, and decrease anxiety.

Rhodiola Rosea enjoys a legendary status amongst athletes and high performers. Its usage dates way back to the Viking Age. For a very long time, Rhodiola was one of the best-kept secrets of Soviet soldiers who used it to withstand tough living conditions.

Make sure to find a Rhodiola supplement that contains a precise ratio of its active compounds: 3% rosavins to 1% salidrosides. Because this is how they occur in nature.

Phosphatidylserine, or simply PS, is the best nootropic for memory. It can also reduce stress levels and improve your competitive cognitive performance.

This healthy fat is found in our brain cells and is needed for their repair, maintenance, and growth. It’s especially important for nerve-protective myelin sheath and brain cell membranes – influencing their structure, permeability and fluidity.

Phosphatidylserine also plays a role in brain cell energy metabolism and neurotransmitter production. In other words, it makes you feel better and more energized.

Research suggests that PS promotes the formation of short-term memory while also boosting the consolidation of our long-term memories. PS can also boost recall and help your brain retrieve information faster. (5)

Benefits you might notice from supplementing PS daily include:

Lion’s Mane Mushroom is the only mushroom known to help with brain regeneration. It does this by raising your NGF (Nerve Growth Factor) levels, which in turn supports several cognitive functions. (7)

Studies show us that Lion’s Mane’s NGF-boosting effects might lead to benefits such as:

In one clinical trial, people took either Lion’s Mane supplement or a placebo three times daily for 4 months.

However, 4 weeks after stopping supplementation, these people’s testing scores dropped. Suggesting that Lion’s Mane needs to keep being taken in order for the effects to last. (8)

One thing you should keep in mind is that not every Lion’s Mane supplement is the same. Look for the Full-Spectrum extract that provides you with:

This is one of the best nootropics for antioxidant support, brain protection and anti-aging, and brain blood flow.

Much like other antioxidants in nature, they have extra electrons that they can donate to unstable cells in your body which are missing an electron. In doing so, they reduce oxidative stress.

But Pine Bark Extract’s antioxidants have some unique advantages:

The flavonoids in Maritime Pine Bark are also shown to:

These anti-aging and brain-regenerative effects of flavonoids have been linked to improvements in learning, memory, and overall cognition, as well as a potential reversal of mental decline. (15)

What’s the best type of Maritime Pine Bark Extract, you ask? Ideally you’ll want to get one that’s standardized to 95% proanthocyanidins, because these are the compounds responsible for most of its benefits.

Vitamins from the B complex group get a special mention because they’re among the best nootropics for brain health, but many people don’t get enough.

While the whole B-complex group is important for your health and well-being, the three B vitamins in particular have crucial brain activities:

Combined together, vitamins B6, B9, and B12 unlock one more effect: the reduction in homocysteine levels.

High homocysteine levels can lead to cognitive decline because they impair healthy blood flow to your brain.

Best B-complex Vitamins for regulating homocysteine and promoting brain function are those that are nature-identical.

They need to be grown on probiotic and yeast cultures with other natural cofactors, which ensures your body treats them as the ones from food.

Alongside Phosphatidylserine and Choline, DHA is the one nootropic we can’t live without. This essential omega-3 fat makes up a large portion of your brain, and is needed to build skin, retina, and cerebral cortex.

Taking DHA is a smart idea if you’re looking to optimize the formation of new brain cells. DHA is especially important for neurogenesis in the cerebral cortex, which is responsible for your brain’s higher-level functions, such as language learning, creative thinking, etc. (17)

Most of us don’t get enough DHA from our diets. You’ll find it in high amounts in algae and some fish, which our modern diets are devoid of.

So, for most people, supplementation will be necessary.

L-Tyrosine is one of the best nootropics for staying mentally sharp under stress – and for replenishing brain chemicals after experiencing stress.

As a dietary amino acid, L-Tyrosine is found in some foods. But it has to compete with other amino acids for absorption, which puts you at risk of not getting optimal amounts.

This is bad news because L-Tyrosine is needed to make dopamine and norepinephrine, two hormones that are involved in your mood, memory and mental processing.

By recharging levels of stress-depleted hormones, L-Tyrosine seems to be able to boost cognitive performance in demanding, stressful and distracting situations.

These brainpower benefits and support for cognitive recovery easily make L-Tyrosine one of the top supplements for excelling in today’s world.

Researchers have shown that L-Tyrosine boosts (18):

The best form of L-Tyrosine for nootropic purposes is N-Acetyl L-Tyrosine or simply NALT. Although the difference isn’t huge, it does seem to absorb better than plain L-Tyrosine.

Stacks with: Rhodiola Rosea, B Vitamins

Ashwagandha is a staple herb of Ayurvedic Medicine. It’s long been used as a general vitality supplement.

However, one very specific benefit of Ashwagandha is cortisol reduction – by as much as 30% in some cases.

Cortisol is the chief stress hormone in your body. It’s released when you perceive a threat. Due to modern life, however, many people have chronically high cortisol levels.

Supplementing with Ashwagandha can promote positive mood, significantly reduce feelings of stress, and reduce physical tension and blood pressure. As a result, you’ll be able to focus on your work better.

Larger doses of Ashwagandha work better – aim for around 500mg per day if you experience a lot of stress.

Ginkgo Biloba is among the very best brain health supplements for older people.

The combination of the two leads to improved oxygen & nutrient delivery to your brain cells.

This is why Ginkgo is such an effective ingredient for older folks. Restricted blood flow is known to lead to cognitive decline, but Ginkgo Biloba might help slow that down.

Ginkgo Biloba works at very low doses. You can take between 50-90mg per day, consistently, and you’ll notice results.

Caffeine is a powerful CNS stimulant. Just 50-100 milligrams of the drug is enough to boost your motivation, reduce the feelings of drowsiness, and increase mental clarity.

Caffeine also improves the quality of deep cognitive processes such as creative thinking, learning, and planning.

However, despite all of this, we prefer caffeine-free nootropics here at Cates Nutrition. Why?

Because, most people already ingest a lot of caffeine during the day anyway, and coffee tastes great.

Adding extra caffeine through supplements is unnecessary and unhealthy for your heart in the long run.

Stacks well with: Almost any nootropic.

Pterostilbene is another antioxidant nootropic. It’s not on the same level as Maritime Pine Bark Extract, but it’s still a great choice.

As such, Pterostilbene works similarly to resveratrol, but with one key difference: it’s far more bioavailable. This makes it more potent at supporting brain health. (19)

Ideally, you’ll want to stack it with Maritime Pine Bark Extract for maximum effectiveness. But otherwise, a nice big dose of this ingredient is good on its own.

Stacks well with: B vitamins and DHA