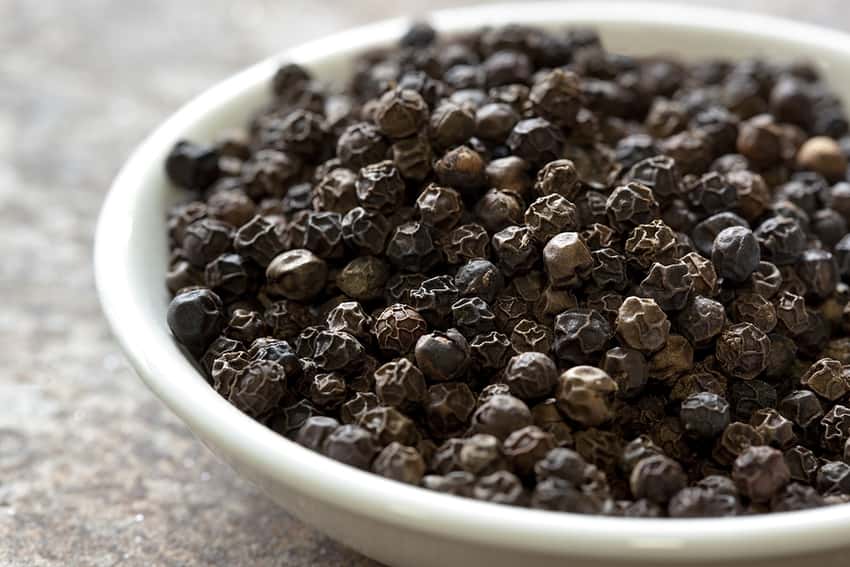 BioPerine® is a patented black pepper extract standardized to have 95% piperine.

Piperine, the main active compound of black pepper, is what’s been shown to increase the bioavailability and metabolism of other ingredients its paired with.

Simply put, BioPerine helps you get more out of Kurapeak. It has been included not to boost energy, libido or other aspects of female health – but because it helps your body absorb and utilize other compounds more efficiently.

Piperine was first discovered and extracted from black pepper in 1819 by a Danish chemist Hans Christian Ørsted. His work helped scientists discover that piperine inhibits the enzyme CYP3A4 and drug transporter P-glycoprotein in the liver, allowing more of the supplement to be utilized by the body.

But while its main purpose in Kurapeak is to tie the whole formula together, Black Pepper Extract has actually been shown to have some beneficial effects of its own.

How Does Piperine Work?

Black pepper extract may lower oxidative stress levels by neutralizing free radicals in your body. These include hydroxyl and superoxide.

In a small study on 20 people with pancreas inflammation, a combo of curcumin and black pepper extract boosted their antioxidant protection. More specifically, it increased glutathione – your body’s master antioxidant – while lowering fat peroxidation and MDA, which are linked to chronic disease. [1]

Combined with daily pollutants, toxins and radiation we’re exposed to, a high-fat diet can increase oxidative stress in our body. Interestingly, piperine has been shown to reduce free radicals in mice who ate a high-fat diet. At the same time, piperine increased levels of antioxidants that further disable free radicals – including superoxide dismutase, glutathione, CAT, and GPx. [5, 6]

As far as inflammation goes, one study with 100 people with type 2 diabetes or metabolic syndrome showed that piperine+curcumin combo has potent anti-inflammatory effects. The mix reduced subject’s levels of C-reactive protein, which is one of the hallmarks of chronic inflammation. [2]

A similar study also reported reduced inflammation in a clinical trial of 40 osteoarthritis patients. Not only did piperine and curcumin lower the levels of C-reactive protein, but they also reduced IL4, and IL-6, which are also strong markers for inflammation. [8]

As we briefly mentioned, black pepper extract has the potential to reduce oxidative, inflammatory, and fat status in people with metabolic syndrome.

In one study, piperine in black pepper enhanced liver function and glucose tolerance. This evidence suggests that piperine can prevent unwanted weight gain, along with making metabolism more efficient at burning fat. [9]

The most researched effect of piperine is increased bioavailability. But how does it achieve this effect?

The answer lies in the major drug-metabolizing enzyme CYP3A4, as well as the drug transporter P-glycoprotein. Black pepper extract inhibits both of them.

Your liver is smart; it protects you by attaching a glucuronoside molecule to supplements (and drugs) which signals to your body to excrete them in the urine. This prevents compounds in your body from building up to excessive levels.

But it can also work against your health and supplementation goals.

The best example is turmeric’s active compound curcumin, which is also found in Kurapeak. You won’t benefit from taking curcumin alone. It has low bioavailability and absorption because your liver metabolizes it very fast.

Indian researchers gave animals 2g of curcumin per kilogram of body weight and tested their blood curcumin levels over the next 4 hours. They found very small amounts of curcumin in their blood.

The researchers then gave the mice the same amount of curcumin, but this time with 20mg/kg of Piperine added. This time, curcumin absorption increased by 154%. What’s more, blood levels of curcumin shot up much quicker and stayed in mice’s blood for longer.

You may ask, does piperine+curcumin combo have the same effect on humans?

Well, it’s even stronger. In one study, researchers gave 2g of curcumin on its own. It wasn’t detectable in the subjects’ blood samples afterwards. But adding Piperine made a huge difference.

2g of curcumin coupled with 20mg of Piperine showed up in human blood within 15 minutes – and it boosted the bioavailability of curcumin by a stunning 2000%. [10]

Piperine is a natural anti-depressant. Here’s how it works…

Piperine is a monoamine oxidase (MAO) inhibitor. It blocks both MAO-A and MAO-B. This means it increases the available levels of neurotransmitters like dopamine in your brain. Dopamine has a profound impact on mood and mental well-being.

Some research shows that Piperine can be as effective as popular antidepressant fluoxetine (Prozac) in some cases. [11]

But black pepper extract doesn’t only boost dopamine – it has a significant impact on serotonin too. Which is a brain chemical that may play an even more important role in maintaining a happy mood.

Lab studies show evidence that piperine can substantially increase serotonin (5-HT) in both the frontal cortex and the hippocampus. [12]

A number of studies suggest that piperine can enhance mental performance.

One animal study found that piperine increases learning and long-term memory retention. Another trial found it may help stave off Alzheimer’s disease. [14]

Some evidence even shows that Piperine may protect the hippocampus area of the brain – which governs memory, mood and other mental functions – from oxidative stress and free radicals.

What’s more, there’s some evidence that shows piperine’s ability to boost new brain cell growth in areas of the brain that are heavily involved in memory. [15, 16]

Plain Back Pepper Extract vs BioPerine: Which is More Effective?

BioPerine, on the other hand, is a patented form of black pepper extract standardized to have exactly 95% piperine in it. This makes it highly reliable – you know how much of the active compound you’re getting every time.

Another key difference is how piperine is absorbed in your body. Piperine takes time to absorb and release in your bloodstream. This time delay is very important; it’s crucial for the increased absorption to occur fast to get the most from the supplement you take.

The highly purified version of BioPerine offers exactly that – getting to work quicker and being a more effective bioavailability enhancer than plain vanilla piperine.

Piperine has the ability to affect different areas of health that are closely associated with female vitality and well-being. These include:

As a result, you might feel more lively and have more energy during the day when taking piperine. This might also help with irritability, mood swings and other symptoms of PMS.

Piperine has been shown to reduce oxidative stress in the brain, which can help keep you mentally sharp at any age.

This includes premature skin aging, arthritis, poor circulation and cardiovascular health, and hormone disbalance. When you’re inflamed, your metabolism starts slowing down and it gets harder to lose weight. Cortisol levels shoot up too, which can have a negative impact on the female hormone estrogen – and by extension, libido and sexual function.

This is where Piperine could help. It’s been shown to lower inflammation levels, not just in the brain but also the body. This has a positive knock-on effect on many areas of female vitality, including healthy joints and bones, active metabolism, and lower stress levels as well as improved female hormones.

No one is immune to daily, chronic stress. Over time, it can lead to some form of physical and cognitive disorder. Curcumin, the main bioactive compound of the turmeric spice, is heavily researched for its ability to protect the brain and the body from stress’ ravages.

To help highlight what goes on in our brain from chronic stress, researchers put male Laca mice through chronic stress for 28 days.

Researchers then gave these mice 200-400mg of curcumin per kilogram of body weight per day. This reversed the stress-caused damage to a certain extent.

After adding 20mg/kg of Piperine to the mix, the bioavailability of the curcumin was significantly enhanced. And so were the effects against stress-caused brain dysfunction. [17]

Research from Thailand looked into black pepper extract’s effects on memory and brain health by creating an animal model of Alzheimer’s disease.

They gave adult Wistar rats piperine daily for 2 weeks. Then they artificially induced Alzheimer-like symptoms in the rats’ brains. They continued to give the rats Piperine for one more week afterwards.

The result? It was found that even at low dosages, Piperine significantly protected from memory impairment and brain degeneration in the hippocampus area – the same area of the brain that governs human memory, mood, executive function and a lot more.

The researchers noted that these effects came from Piperine’s ability to reduce lipid peroxidation, along with inhibiting the acetylcholinesterase enzyme, which breaks down the memory neurotransmitter acetylcholine.

Additionally, piperine was shown to have a neurotrophic effect in the hippocampus. Neurotrophic meaning it stimulates neuron growth. [18]

A number of studies have looked into the effects of piperine on fat loss. In one animal study, rats with a high level of blood lipids and cholesterol lost fat mass when piperine was introduced to their diet. [19]

Interestingly, piperine increased the number of calories burned in another study. This boost in metabolism suggests why this particular compound of black pepper may help with weight loss. [20]

Piperine also prevented and slowed the production of fat cells in another animal trial. [21]

How Does it Feel to Use BioPerine Daily?

Piperine by itself has some antidepressant effects. So you might feel a lift in your mood.

Combined with turmeric in Kurapeak, piperine will enhance its pain-relieving properties. It’s particularly useful if you suffer from conditions like arthritis, as this will greatly help enhance the reduction in joint swelling and inflammation. Piperine even has some anti-inflammatory effects of its own.

Thanks to piperine, the benefits you’ll get from other ingredients in Kurapeak will be enhanced, too. This includes a reduction in anxiety, improved focus and mental energy, higher stamina and exercise performance, and more balanced hormones as well as a better sex drive.

Anywhere between 5-20mg of piperine per day is the optimal dosage of piperine. Looking at the majority of the studies, the sweet spot in terms of long-term benefits is 10mg per day, which is why we’ve included this exact amount in Kurapeak.

Keep in mind that Kurapeak contains BioPerine, which gets absorbed and utilized by your body more efficiently. As such, 10mg of BioPerine in Kurapeak is more effective at potentiating other ingredients (such as turmeric) than 10mg of generic black pepper extract.

Piperine is found naturally in Black Pepper and is completely safe and nontoxic. BioPerine is a high-quality form of piperine that is standardized to have a precise amount of the active compound, ensuring both its safety and reliability.

Studies have regularly used 20-30mg of Piperine extracts per day with no ill effects. This means that you have space to add other supplements with piperine to your daily stack in addition to 10mg of BioPerine in Kurapeak. Just make sure not to over-do it, as too much piperine can actually decrease the effects of other supplements instead of potentiating them!

Turmeric is known as one of the world’s healthiest spices. It’s known to help with everything from depression, chronic fatigue, poor liver function, to gut inflammation and achy joints.

BioPerine is often paired together with Turmeric supplements, and for good reason. It’s been shown in studies to enhance the absorption of turmeric’s active ingredients by up to 2,000%.

Together in Kurapeak, BioPerine and Turmeric both provide their unique benefits while also potentiating each other – helping you to get the best of both spices.