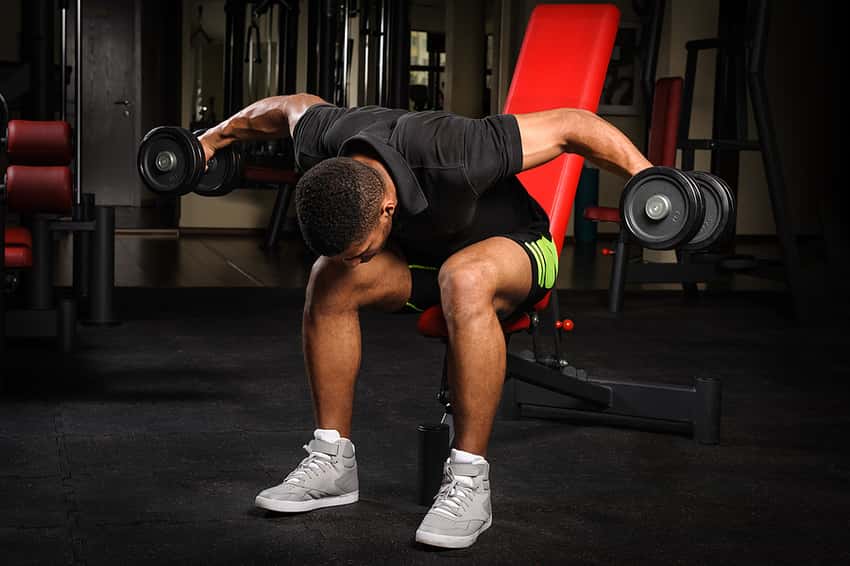 Dumbbell Rear Delt Fly: Benefits and How To

The dumbbell rear delt fly, also known as the dumbbell reverse fly, is an exercise that increases strength and mass in the deltoids.

This movement also works several other upper body muscles, though the main focus is on your rear (posterior) deltoids, which are located in the shoulders.

This exercise should be a staple movement in any shoulder workout as it helps to build well-rounded shoulders, contributing to the popularly desired “boulder shoulder” aesthetic.

This article discusses the benefits of rear delt flies, how to perform them correctly, and other rear delt exercises that you should be including in your workout program!

What is a Dumbbell Rear Delt Fly?

The rear delt fly is a shoulder exercise that targets the posterior of the shoulder, the deltoid muscles. This can be performed using dumbbells, a pec dec machine, or a cable machine.

The move involves hinging at the hips and raising weights to your sides in an arching motion. This is a staple shoulder movement that should ideally be included in your shoulder workout program.

This movement helps build the rear portion of your shoulders, which is typically more neglected when compared to the front and sides of the shoulders (think lateral raises, the most common shoulder exercise, for example).

What Muscles Are Worked by the Dumbbell Rear Delt Fly?

The dumbbell rear delt fly mainly works your rear delts. Your deltoid muscles are separated into three main fibers: the anterior, lateral, and posterior deltoids. Your posterior delts get the most attention from the exercise.

Lateral raises and front raises are examples of exercises that can target the anterior and lateral deltoids.

Though, rear delt flies also work some other secondary muscle groups, including the trapezius, which is located at the top of your shoulders and neck, as well as the upper back muscles.

In addition to these muscles being worked, your core is also activated and engaged during the movement, helping to stabilize your body throughout.

What are the Benefits of the Rear Delt Fly?

Many office workers are sat at a desk working for hours a day. This alone can wreak havoc on our posture, something which is often overlooked as a contributing factor to poor overall health.

Though many exercises can be incorporated into a workout routine to help improve posture, rear delt flies are specifically good for this reason.

If your shoulders appear “hunched”, a dumbbell rear delt fly can help correct this problem by tightening and strengthening your upper back.

The core engagement involved in this exercise also assists with overall posture by helping to maintain a straight back.

Not only are rear delt flies useful for everyday posture improvement, but they can also help strengthen your shoulders and upper back by developing the surrounding muscles.

While the rear delt fly is often seen as an accessory exercise, it can actually help to boost your performance in compound exercises such as the overhead press, deadlift, and bench press.

Strong shoulders are a key aspect of any training program, and your rear delts play a much bigger role than what you may think!

If you are looking to improve your physique and appearance, you should be prioritizing shoulder exercises. Many bodybuilders put too much emphasis on their arms and chest, often leaving them with disproportionally smaller shoulders.

This isn’t the best approach, especially if you’re looking to step on stage in the future. Muscle symmetry is not only important for a bodybuilder’s physique but also for generally promoting a better balance in your body.

Now that we have established the benefits of rear delt flies, let’s take a closer look at how to perform this movement correctly.

For the movement, all you need is some space and a set of dumbbells, starting at a lightweight.

Stand tall with your feet shoulder-width apart, hinging at the hips until your back is almost parallel to the floor.

Bend your elbows slightly, contracting your rear delts to bring the weight up and out to the sides. At the top of the movement, squeeze your shoulder blades together.

Bring your arms back down to the starting position and repeat for the desired number of reps.

Other technique cues to remember:

Ensure you are keeping your core, back, and shoulders engaged throughout the movement.

Aim to complete around 3 to 4 sets of 10 to 12 reps to start with. Only change this when you become more comfortable with the movement.

While this movement appears relatively straightforward, there are some common errors to keep in mind:

Rather than bringing arms up on a lateral plane, you may see some people bring the dumbbells back on a diagonal plane towards their glutes. This results in too much back activation instead of rear delts.

Avoid this by keeping the dumbbells moving outward on a lateral plane to properly work your shoulders.

This is a big issue among many lifters when doing any accessory movement. While it can be tempting to grab a heavy set of dumbbells, it can often be less effective as you are unable to complete full reps due to poor form.

The rear delts are only a small muscles group, so they aren’t particularly strong, nor do they need a heavy lifting session to grow and strengthen.

Try not to compromise the movement by picking weights that are too heavy, you will see better results if you choose a lighter weight and perform complete reps with good form.

The muscles in your upper back will be activated throughout the movement, but we want to primarily target the shoulders.

The dumbbell rear delt fly is one of the most effective exercises for building well-rounded shoulders.

This exercise should form a part of your shoulder workout routine as an essential accessory to help increase overall strength, improve posture, and help build the sought-after “boulder shoulders”.

Need a helping hand in the gym to boost performance and give yourself an edge over your competitors?