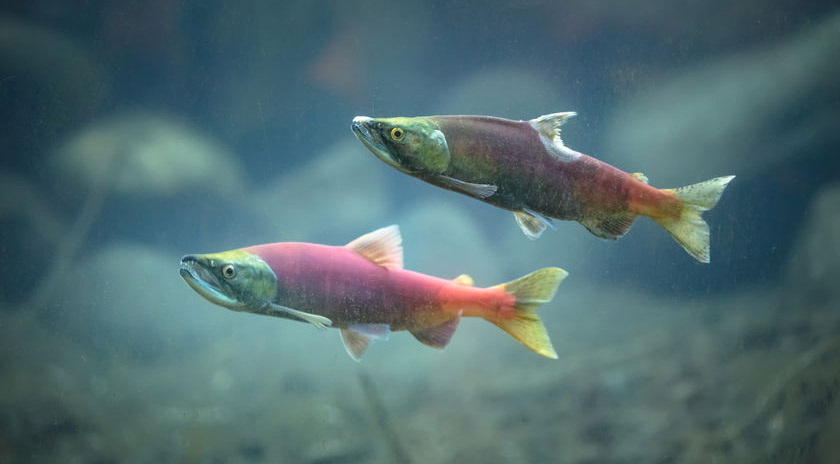 Today, more and more people strive to uphold a healthy diet. Sometimes the healthy choices are obvious: fruits and vegetables are a great source of nutrients while sugar is better to be avoided.

Things get complicated when it comes to picking the right meat though. Take salmon for example, a fatty fish praised for its health benefits: rich in omega-3s, good for the heart and a source of protein which is low in calories.

Salmon is in high demand, consumed by millions of people around the globe. So much so that most of the salmon found on the market comes from fish farms rather than the wild.

This sparked an ongoing debate among dieticians about which type of salmon is better to eat and whether the one bred in fish farms can be dangerous to consume. This article provides an overview on the issue and discusses the benefits and disadvantages of both sides.

Farmed Salmon – is it safe?

The majority of salmon found on the market nowadays comes from fish farms, where it is harvested under controlled conditions in sea cages or net pens.

The problem is that the fish can easily be overcrowded. Commercial pressures mean that they are farmed at a high intensity and, according to some researchers, this can become a source of contamination and diseases.

The Environmental Working Group (EWG) reported in 2003 that as much as seven out of ten farmed salmon sold in grocery stores contained high levels of polychlorinated biphenyls (PCBs), compounds which can cause cancer among other health concerns.

concentrations of dioxins, PCBs, polybrominated diphenyl ethers, and pesticides, including toxaphene and dieldrin, among other contaminants

Were shown to be present in significant higher amounts in Atlantic farmed salmon than their wild Pacific counterparts.

Farmers have control over breeding and often feed the fish with a synthetic version of astaxanthin, an antioxidant and essential anti-inflammatory aimed to improve the general health of the fish. Although the artificial version is not as potent as the natural one consumed in the wild, it is still beneficial and, more importantly, it’s not toxic for humans.

Over and above astaxanthin, farmers can also give fish questionable antibiotics and other drugs designed to keep them in good health. Specialists have raised concerns over the years though, insisting that these antibiotics are dangerous since they could increase resistance for other human antibiotics. The food is also supplemented with chemicals that give the fish their famous pink color, developed otherwise naturally in the wild.

Additionally, farms are a known source of pollution for the oceans as they spill fish excrement and uneaten feed into the local ecosystem.

Some farmers also choose to breed species of salmon which are not native for the particular area, this can become problematic if the fish were to escape in the wild. Once escaped, the foreign salmon would end up competing with local species for food and reproduction, or disperse disease and parasites.

Wild salmon has become more and more rare in recent decades due to overfishing. Since wild salmon live and breed in their native waters, humans have little to no control over their development. They can swim long distances without restrictions unlike their farmed counterparts and overall they are considered a much healthier choice, which is reflected in their higer price.

However, many people worry wild salmon is just an overcharged version of the cheaper farmed salmon and represents an inconvenience to their wallet.

Considering environmental and chemical toxins still contaminate wild salmon, it is easy to assume there is no difference in the nutritional values of the two types.

However, wild salmon are not as exposed to antibiotics and pharmaceutical products. As a result experts usually recommend children and pregnant women, two vulnerable categories, to consume only wild salmon.

The main food sources for wild salmon are krill, crabs, and shrimp. Their high concentrations of the carotenoid astaxanthin gives them their distinctive pink color. Typically, wild salmon contain more protein and also have fewer calories, which makes them nutritionally superior.

How to distinguish between them

Differentiating between wild and farmed salmon can be quite tricky and difficult since package labels are often unreliable. At least 43 percent of restaurants and shops surveyed by the organization Oceana haven’t labeled their salmon correctly in the past. Researching merchants and restaurants before purchasing seems to be the only viable solution in this case. Specialists recommend we only support suppliers who are known for distributing sustainable, responsibly farmed fish.

One must keep in mind that wild salmon is a seasonal species only available in the summer and that their color varies, while farmed salmon is usually fed supplements to enrich its pink color. The diet of the two types also greatly differs which affects their nutritional value.

Due to diet, farmed salmon may have more fat than the wild one, which could even be visible. Farm-breed salmon may also have a rounder shape than wild salmon.

Which is better and how to choose

One of the biggest concerns when it comes to fish is their high content of heavy metals, toxic for humans. Mercury, for example, creates oxidative stress which damages cells and later on can lead to developing a variety of health conditions.

Although all salmon has some level of mercury in their system, one study revealed that wild Atlantic salmon is richer in mercury than its farmed version. While omega-3s may help prevent the metal from causing severe damage, it still remains a source of concern. Other heavy metals found in fish include arsenic, cadmium, and lead.

Their diet differs quite drastically, wild salmon consuming other organisms from their natural environment, whereas farmed salmon is fed processed, high-fat, high protein feed meant to make them larger.

Although both farmed and wild salmon contain some compounds absorbed from their environment which are not good for the body, they are considered in general safe for consumption and an excellent source of nutrients.

Most dieticians would advise consuming wild salmon when possible, this being the superior version from an ethical and environmental perspective, as long as it is fished sustainably.

Let’s not forget balance is always needed in order to create the best diet proper for each person’s nutritional needs.