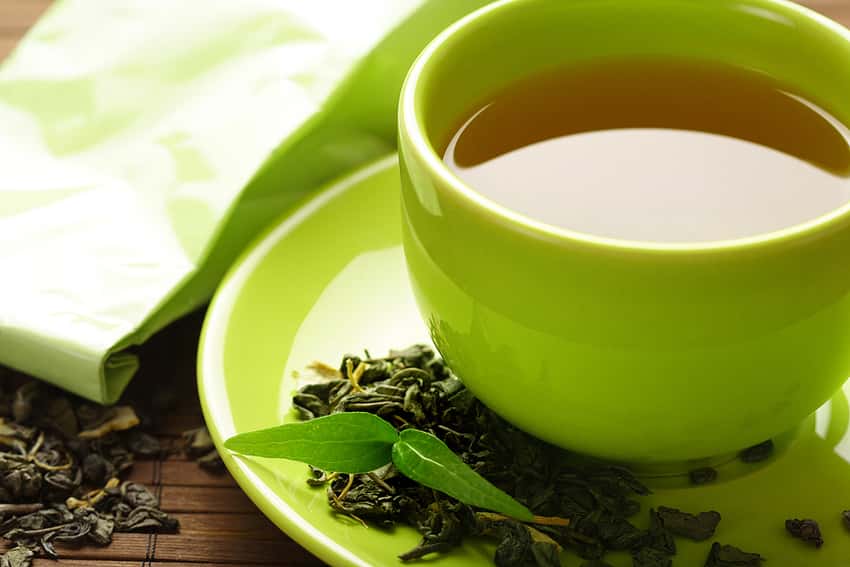 Structurally similar to neurotransmitters l-glutamine and l-glutamate, L-Theanine is one of the few supplements known to modulate alpha brain waves. Which are associated with calm focus, wakeful relaxation and creative thinking.

It’s often combined with caffeine to smoothen the negative side effects of the drug – such as jitters and energy crashes.

L-Theanine is also one of the best natural female vitality enhancers, due to its safety and a variety of beneficial effects on the body and mind.

L-Theanine works on your brain’s alpha waves, which are responsible for inducing feelings of peace, calm and deep focus (without making you sleepy).

This is different than the state that we’re in most of the time, which is the ‘beta’ brainwave state. This is linked with excitation, alertness, and even stress.

Chronic stress means our cortisol levels stay elevated, which can bring about a whole host of health issues down the road.

By enhancing alpha brain waves, L-Theanine has a direct effect on cortisol – reducing the overproduction of the stress hormone.

This is supported by studies that report a reduction in salivary stress markers following l-theanine consumption. [1, 2]

As we previously mentioned, high cortisol has many negative implications on the body.

One of them is that it increases your neutrophils while decreasing your lymphocytes, suppressing your immune system and creating inflammation in the process.

L-theanine has been shown to revert these effects, both alone and when combined with L-cystine. It strengthens the immune system and reduces the risk of catching a cold or the flu.

What’s more, L-Theanine can boost the activity of your killer T cells, which protect the body against cancer and infections. [3, 4]

One benefit of L-Theanine not many people know about is that it may boost weight loss.

It achieves this in different ways. One, it’s been shown to reduce triglyceride and fatty acids in the blood. [5]

Last but not least, one animal study showed that it reduces the uptake of fats and sugars in the gut. This is part of the reason why green tea is so effective at boosting fat loss and preventing weight gain. [6]

L-Theanine reduces mental stress by increasing alpha brain waves. Alpha waves are linked to relaxation and concentration. The effect is similar to that of meditation.

In one study from South Korea, 20 healthy male participants between 18-30 years old were split into a L-Theanine and a placebo group.

The trial lasted 7 days. The researchers measured participants’ brain waves 40 minutes after giving them either L-Theanine or placebo tablets.

They found that L-Theanine tablets boosted the activity of alpha brain waves related to cognitive focus and relaxation. [7]

L-theanine does more than just affect your brain waves. According to research, it also increases your serotonin, dopamine and GABA neurotransmitters.

At the same time, it reduces glutamate, the excitatory neurotransmitters linked to stress, tension and brain cell death.

One study from Japan looked into the effects of L-theanine in 12 people across 4 separate trials. In one trial, these people took L-Theanine at the beginning of the test. In another one, they took it half-way through the trial. In the last two trials, the participants either took a placebo or nothing.

The results of this exhaustive study showed a reduction in heart rate and s-IgA, both of which are associated with acute stress.

The study concluded that L-theanine has the potential to lower stress by inhibiting the ‘overexcitation’ of cortical neurons. [8]

L-theanine can help almost anyone feel more at ease, but studies show it may be the most effective for females dealing with high levels of anxiety.

Five different studies with a combined 104 volunteers found that L-theanine lowered stress and anxiety in those who were going through stressful situations.

L-theanine may even help with other, more serious conditions. In a study published in the Journal of Clinical Psychiatry, researchers found that L-theanine not only lowered anxiety but also improved symptoms of schizophrenia. [10]

Another clinical trial looked into L-theanine’s effects on depression. The study included 20 people with major depressive disorder, and found that L-theanine could help with depressive symptoms, sleep impairments, and cognitive dysfunction. [11]

Other benefits of L-theanine for female vitality include:

Here’s a look at some of the L-theanine studies and how the compound may improve female vitality and health overall.

A lot of research has been done on L-theanine and its effects on stress in both animal and human trials.

The thing about stress is that it negatively affects almost every aspect of health – including your memory and focus.

Corticosteroids, which secrete when you’re stressed, have a massive long-term impact on memory formation and potentiation.

In one animal study, mice were fed L-theanine-containing water for 3 weeks. After this, they were put through a stress-inducing exercise. The results showed lower stress levels in mice who took L-theanine than those who had none.

More impressively, the stress that L-theanine fed mice did experience didn’t have any effect on them. Their memory wasn’t affected.

The study concluded that L-theanine modifies corticosterone release. Thanks to this effect, it can be a strong preventative measure in preventing memory loss caused by stress. [12]

Study #2: Green Tea May Protect the Brain from Stroke

Studies suggest that if L-theanine is present in the body at the time of stroke, the brain suffers much less damage.

One massive study from China took this a step further. It looked at 14,212 subjects across 12 provinces. Their ages ranged between 35-60 years old.

The researchers looked at the subject’s tea drinking status, type of tea they were drinking, and the dose.

They ultimately found that the people who drank green, black or jasmine teas had a 40% lower risk of stroke. [13]

This double-blind, placebo-controlled study looked at the effects of L-theanine on attention and memory.

The researchers recruited 91 subjects with mild cognitive dysfunction. One group took 1,680mg of L-theanine every day for the next 3 weeks, while the control group took a placebo pill.

At the end of the trial, the results showed an increase in brain Theta waves linked to cognitive alertness and creativity. What’s more, L-theanine improved these people’s memory.

Based on these findings, the researchers concluded that L-theanine has the potential to improve markers of cognitive impairment. [14]

You could say that this is an understatement, and we wouldn’t blame you. People meditate for years to be able to consistently enter a theta brainwave state. In this study, people achieved the same with a dose of L-theanine. The same one you could get from a few cups of good quality green tea.

A considerable amount of research shows that green tea with high L-theanine and low caffeine content can improve sleep quality and reduce anxiety in middle-aged women. [15, 16, 17]

L-theanine also helps soothe sleep disturbances caused by certain conditions. It’s been shown to improve sleep quality in everyone from boys with ADHD, adults with major depressive disorder, and individuals with schizophrenia. [18, 19, 20]

Animal studies show similar results. In one particular trial, mice that were given a combo of L-theanine and GABA saw an improvement in both duration and quality of their sleep. [21]

In another study, L-theanine canceled the negative effects of caffeine on sleep.

This brings us to the next question; are there any benefits to mixing caffeine and L-theanine?

L-Theanine and Caffeine: Can You Mix Them Together?

This is supported by studies which show that L-theanine+caffeine combo works better than either one of them alone. Specifically, the combo might be superior at improving memory and brain function. [22]

Kurapeak contains clinically researched 100mg of L-theanine per serving. Taking it together with your morning coffee is a perfect way to reap the energizing benefits of both compounds, while also smoothening out caffeine’s negative effects.

L-Theanine is typically taken in doses between 100-400mg per day. Although the safe upper limit is 1,200mg, this compound works best when taken in lighter doses, especially over the long-term.

Which is precisely why we’ve included 100mg of L-theanine in Kurapeak. Even though it’s plenty and enough to experience all of its benefits, it also means you won’t build a tolerance to it as you’d do with a higher dosage.

L-Theanine is water soluble and so it can be taken without food.

As a naturally occurring amino acid, L-theanine is perfectly safe and non-toxic. It does decrease blood pressure, which means you should talk to your doctor prior to taking it if you’re on a blood pressure-lowering medication.

How Does it Feel to Use L-Theanine Daily?

Every person has different neurochemistry, brain waves, and brain structure. L-theanine might not work for you the same way it does for someone else.

That being said, most people who take L-theanine report a calming effect after about 45 minutes of ingestion. You may notice your cognition getting a boost, and your energy levels rise without the typical jitters of caffeine.

If you have issues with anxiety and nervousness, L-theanine can help tremendously in this case. Its alpha-wave, GABA-boosting activity means it’s one of the most effective natural calming agents, without actually sedating you (unlike benzo for example).

Most people who take L-theanine report an improvement in their overall life quality. And almost everyone says they sleep sounder.

Kurapeak Stack Strategy: L-Theanine + Coffee (or Your Other Favorite Source of Caffeine) for Clean Mental Energy

Kurapeak is stim-free. Part of the reason why is because most people already drink caffeinated beverages to boost their alertness throughout the day.

Kurapeak’s L-theanine works as an enhancement to caffeine. It delivers L-Theanine in a stim-free formula, allowing you for more precise control over your daily stimulant intake.