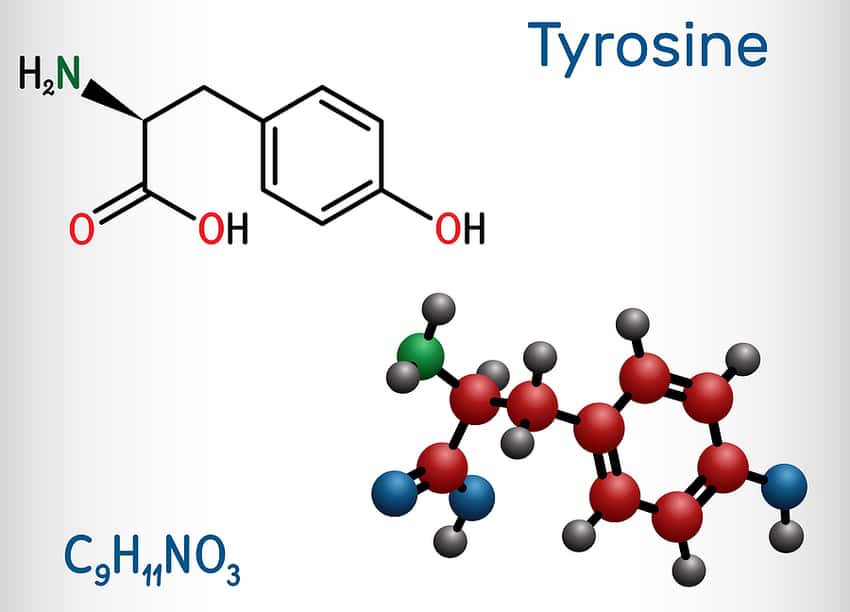 L-Tyrosine is a dietary amino acid with numerous vital functions.

In other words, Tyrosine has a significant role in not just how you function mentally but also your metabolism and overall health.

Having low amounts of this crucial molecule in your diet can lead to irritability, mood swings and lack of focus in conversations and at work.

Supplementing Tyrosine, on the other hand, can help you better deal with everyday stress and be a more productive version of yourself.

With the aid of selenium and iodine, the body uses tyrosine to make thyroid hormones.

A study with 85 volunteers showed that supplementation of L-Tyrosine daily during harsh winter increased T3 thyroid hormone. It also significantly lowered TSH, another thyroid hormone, which, when too elevated, is linked to stress and hypothyroidism. [1]

A healthy diet and training regimen remain the best, most effective ways of losing unwanted fat.

That being said, supplements like Tyrosine can give your weight loss efforts an extra boost.

Tyrosine helps your body produce thyroid hormones, and it helps your brain produce catecholamines, both of which enhance the metabolism and energy expenditure.

Having thyroid hormones out of balance means the metabolism might be slower, leading to unwanted weight gain.

In a study with 80 obese adults, researchers tested the effects of a supplement containing L-Tyrosine on fat burning. The results showed that the supplement helped to boost weight loss in the individuals who took it, compared to the placebo.[4]

Your dopamine levels quickly get used up during stress or sleep deprivation. By stress, we mean any kind of stress – whether that’s loud music, cold exposure, arguments at work, etc.

When dopamine levels drop low, so does your mood, concentration and ability to deal with problems. You start procrastinating and looking for ‘quick fixes’ such as sugary foods, TV or other ways to boost your dopamine levels back, at least for a short while.

Supplementing with L-Tyrosine helps offset the depletion of dopamine caused by stress, and by extension, it helps prevent you from giving in to cravings.

The unused dopamine is converted by your brain into epinephrine and norepinephrine, which together with dopamine form a triad of neurotransmitters called ‘catecholamines’.

L-Tyrosine is one of the most effective supplements for boosting your mental performance under acute stress and high-pressure situations – helping you to stay ‘cool’ when things get hot.

By “acute” stress, we’re referring to short-term stress that can affect your cognition and make your brain blank out. Examples include heat, cold, or even giving a public speech.

In fact, taking L-Tyrosine before an event where you know you may be nervous is an effective way to help you stay mentally sharper during the actual event.

Other scenarios where L-Tyrosine has been shown as extremely useful include sports, car accidents, relationship problems, cold showers, and exams.

In a study from the UK’s University of Bedfordshire, researchers measured the effects of Tyrosine on cognitive performance before an exercise task.

They recruited 8 volunteer soccer players and asked them to complete a 90-minute soccer simulation in a chamber set at 25 degrees Celsius (77 degrees Fahrenheit).

The soccer players were split into two groups; one took a placebo while other was given L-Tyrosine.

Their cognitive performance was measured before the exercise simulation, at ‘half-time’, after half-time and after the simulation ended.

The results of the study showed that L-Tyrosine could enhance mental performance and prevent dips in cognitive function during exposure to stressful environments, such as exercise-heat stress. [3]

According to Associates for Women’s Medicine, tyrosine has a history of use in alternative medicine as an aid in boosting memory, cognition and mental alertness.

It’s also been used to treat ADD and depression, symptoms that many women experience in today’s day and age.

For women who like to stay fit and active, Tyrosine may be helpful in improving exercise performance. Not just physically, but also by giving you the mental boost when things get difficult, so you can see the workout through and feel great afterwards.

Other uses of Tyrosine for female vitality include:

Here’s a look at the studies of L-Tyrosine and its effects on the female body and cognitive well-being.

It’s generally understood that our blood pressure goes up when we’re under stress. This is a survival mechanism that helps prepare our body for quick action.

A study from the Netherlands reported an improved cognitive function & reduction in blood pressure 15 minutes after L-Tyrosine ingestion. The study involved checking the task performance of volunteers after short-term stress.

Short-term or acute stress can be caused by athletics, CrossFit, loud music, arguments, driving, and even overthinking.

The point of this study is that it’s applicable to everyone. The results showed that L-Tyrosine helps reduce diastolic blood pressure within 15 minutes of administration, and that blood pressure normalizes after about 1 hour.

Ultimately, this research shows that L-Tyrosine might help your body better cope with stress. Not just by reducing blood pressure but also by mitigating the cognitive effects if taken prior to the stressful event. [5]

A number of studies have looked into the effects of L-Tyrosine on ADHD (and ADD). One study from 1980 found that L-Tyrosine can provide short-term relief in ADHD symptoms.

It also showed that L-Tyrosine might benefit certain individuals more than others. No matter if you’re suffering from ADHD or are in perfect cognitive health.

One study, in particular, compared the effects of amino acid precursors vs pharmaceuticals for treating inattention, irritability, poor focus, poor self control and other symptoms of ADHD.

The study, which included 85 young people between 4-18 years old (all diagnosed with ADHD), was published in Neuropsychiatric Disease and Treatment in 2011.

L-Tyrosine was given for dopamine and 5-HTP for serotonin. The participants were treated for 8-10 weeks.

The researchers used urinary samples to determine their dopamine and serotonin levels for the first 4 weeks.

If their urinary samples didn’t reach sufficient levels, participants were given higher doses until they got relief from their symptoms.

Ultimately, the study found that dopamine and serotonin precursors had similar effects as prescription pharmaceuticals.

The researchers even hypothesized that the amino acid protocol “may have efficacy that is superior to some of the prescription drugs currently used in the treatment of ADHD.” [6]

People with high mental or cognitive flexibility can quickly adapt to novel situations. These types of people thrive under pressure, have superior fluid intelligence, comprehend things easily and have a healthier brain overall.

All of the study subjects were asked to go through task-switching tests to measure their cognitive adaptation (aka, flexibility).

The results showed that individuals who took L-Tyrosine had better cognitive flexibility than those from the placebo group. This saw the researchers conclude that “L-Tyrosine can facilitate mental flexibility by replenishing cognitive resources.” [7]

It’s generally accepted that imbalances in brain neurotransmitters – including dopamine – play a role in depression and mood disorders.

Since Tyrosine boosts the production of dopamine and other catecholamine neurotransmitters, it might provide mood support.

One study showed that L-Tyrosine can reduce symptoms of low mood after childbirth. And another one showed that it can alleviate symptoms of depression that are caused by low dopamine levels. [8, 9]

Some people claim that N-Acetyl L-Tyrosine is more effective than plain Tyrosine. Is this true?

First and foremost, what is NALT? It’s L-Tyrosine with an added acetyl group. When you take NALT, your kidneys break id down back into L-Tyrosine.

NALT is more water-soluble than plain L-Tyrosine and thus better for intravenous injections in people who can’t take it orally.

In theory, both NALT and L-Tyrosine should work the same when taken by mouth. In fact, it’s speculated that our body uses more NALT than L-Tyrosine, but scientific research says otherwise.

What’s more, one study with 13 subjects didn’t find any increases in Tyrosine levels after NALT supplementation. [10]

As a result, L-Tyrosine remains the superior option for oral supplementation.

For acute benefits, L-Tyrosine is typically taken in doses of 500mg per day or higher.

However, such a high dose fails to deliver the same long-term benefits as a lower dosage, since your body quickly builds a tolerance to it.

Taking lower doses of L-Tyrosine is generally shown to be more effective at maintaining the benefits without diminishing returns.

This is why we’ve chosen to include 200mg of L-Tyrosine in Kurapeak. This has been shown to be the sweet spot in terms of effects and long-term reliability.

L-Tyrosine is a safe, non-toxic compound. It’s naturally found in foods and most people won’t have any negative side effects from supplementing it.

If you’re healthy, L-Tyrosine supplementation is a safe and effective way to boost your cognitive and physical well-being.

In very rare cases, it’s been reported to cause stomach issues and migraines when taken in very high doses.

L-Tyrosine supports thyroid hormones and so it shouldn’t be used if you’re hyperthyroid. It should also be avoided if you’re on any kind of MAOI medication.

This is because MAOIs block dopamine breakdown, which can lead to higher dopamine brain levels. Taking L-Tyrosine in combination with MAOI’s can elevate dopamine too much.

However, for most people Tyrosine will work perfectly and without any issues long-term.

How Does it Feel to Use L-Tyrosine?

Bear in mind that L-Tyrosine is a precursor to catecholamine neurotransmitters. And so if you’re ‘low’ in any of these, you’ll feel almost an instant boost after taking L-Tyrosine.

Many people who use it report better focus, increased energy, a lift in mood, and increased ability to deal with daily stress.

Supplementing with L-Tyrosine can help lower your blood pressure if it’s raised from a stressful situation. Ideally, you’ll want to take it before a stressful event to be at your sharpest cognitively.

If you’re into fitness, you may find that taking L-Tyrosine before a workout leaves you feeling amazing afterward. This is because it helps to offset many of the effects of short-term stress from acute stressors.

You may also find it easier to get a tan on the beach, as L-Tyrosine helps your body make the natural skin pigment melanin.

Panax Ginseng (aka True Ginseng) is known for boosting mental energy and mood, which can further regulate stress response – allowing you to maintain clear mental processing when things heat up.