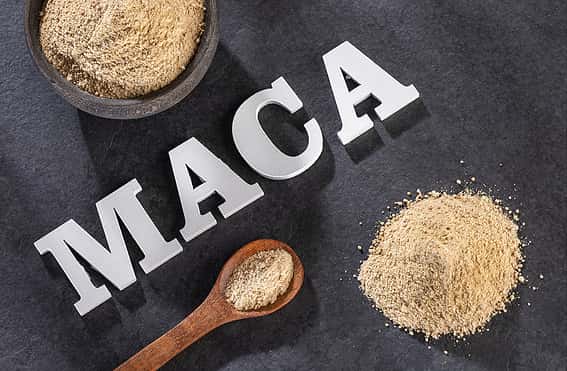 Being the only plant able to grow (and thrive) at such high altitudes, it’s both a staple food and medicine in the Andes.

The root, which is the main edible part of the plant, exists in different colors. These include yellow, red and black.

Yellow Maca is the most common for daily use, while red and black have slightly higher concentrations of some compounds for specific health conditions and goals.

That said, all types of Maca have been traditionally used since pre-Inca times to boost vitality and different aspects of wellness. Especially sexual function.

Interestingly, Maca is also a potent neuroprotectant. Not only does it have high amounts of antioxidants, but it also boosts GABA, serotonin, dopamine and acetylcholine levels in the brain – leading to improved cognitive well-being.

Below we’ll look closer at scientific studies on Maca and its benefits on female vitality.

How Does Maca Work?

All forms of maca are known for their ability to increase sexual desire. And although it’s a very popular male supplement in the West – and rightfully so, as different studies confirm its positive effect on erectile dysfunction and libido – it’s actually been shown in research to benefit women just as much.

In one study with 20 men and women who had sexual dysfunction, 12 weeks of Maca treatment led to significant improvements in their symptoms as well as their sex drive. [1]

In another randomized, double-blind placebo-controlled study, 14 healthy postmenopausal females took maca supplements for 6 weeks. By the end of the trial, their sexual dysfunction symptoms were reduced. [2]

Maca contains compounds that have been shown to boost bone health. Both animal and human trials confirm this.

One study found that a compound containing 83% maca decreased pain and stiffness and improved physical function of 95 osteoarthritis patients. [3]

As estrogen levels go down, it’s typical that bone loss starts to occur for females.

One animal study looked into this, and it showed results that could be highly relevant to humans. The study showed that maca prevented bone loss due to low estrogen levels in rats. [5]

Some of the more annoying menopausal symptoms are irritability and discomfort from night sweating and hot flashes. What’s interesting about Maca is that it’s been shown to reduce these very symptoms in a study of 124 postmenopausal females. [6]

Another study reported a decrease in follicle-stimulating hormone and luteinizing hormone, while increasing estrogen and progesterone in 20 postmenopausal women. [7]

Maca is a nutrient-dense plant. Among its wide array of compounds, it contains powerful antioxidants that have been linked to lower inflammatory markers in the body.

In a study of 50 people, regular maca consumption was linked to reduced interleukin-6. Elevated levels of this pro-inflammatory cytokine can lead to different ills. [8]

One animal study shows that black maca could be even more powerful than other types of maca for this purpose. The trial showed a potent reduction in markers of oxidative stress. [9]

Maca boosts mental well-being in both men and women – this is a well known notion. However, what’s less known is that Maca does this without affecting hormones. At least not directly.

Researchers in Australia created a randomized double-blind, placebo-controlled study of 29 postmenopausal women. They gave these women 3.3g of Maca or a placebo per day for a total of 3 months.

The researchers also did a separate test to check the severity of women’s menopausal symptoms.

What they found was that women’s hormones didn’t change at all. However, their anxiety and depression scores reduced dramatically.

This led the researchers to conclude that Maca can reduce mood swings and anxiety independently of hormones.  [10]

If you’re curious, all three varieties of Maca yielded the same results. [11]

Anandamide is a neurotransmitter that attaches to your brain’s cannabinoid receptors.

Maca contains a compound macamide which is structurally very similar to anandamide.

In Sanskrit, the word “ananda” means joy, delight or bliss, and Anandamide is called “the bliss molecule”.

Interestingly, scientists speculate that Maca provides its benefits by prolonging the time anandamide stays in your brain, as well as binding to your cannabinoid receptors.

This may account for Maca’s potential to boost metabolism, regulate hormones, enhance libido, relieve the blues, and improve memory. [12]

As previously mentioned, Maca can aid female health in a variety of ways.

For one, it’s been shown to boost libido, energy and vitality. Additionally, Maca’s antioxidants are powerful inflammatory regulators, and a such, can help fight aging and chronic diseases – such as osteoarthritis.

Maca is especially beneficial for perimenopausal and postmenopausal women. It can reduce PMS symptoms and hot flashes. It can also protect from weak bones associated with natural estrogen decline.

On the cognitive side of things, Maca can aid with irritability and mood swings. In fact, some experts suggest it should be classified as an adaptogen – a type of compound known to aid the body in dealing with stress.

Adaptogens soothe stress hormones such as cortisol from doing damage to your body. Taking Maca can help you feel calmer mentally, but more energized physically. Coupled with its ability to promote endocannabinoid activity in the brain, means Maca can be a powerful anxiety buster as well.

Researchers from Victoria University in Australia conducted a double-blind, placebo-controlled study to check Maca’s effects on mood of 14 postmenopausal women.

The women were split into two groups. One took a placebo while the other took 3.5g of Maca per day for 12 weeks.

The volunteer’s blood was tested for various hormones. In addition, they went through a series of tests to assess their mental state.

At the 8th week mark, Red Maca improved emotional well being in around 80% of women.

At week 12, this number rose to 90%. Most of the females from the Maca group reported an increase in energy levels, too. [13]

In another study from Peruvian University, 175 people took either 3g of maca extract or a placebo. The Maca used were either Black or Red Maca daily for 3 months.

Half of these people lived at high altitudes and the other half at low altitudes. Taking either of the maca extracts saw their mood, energy, Chronic Mountain Sickness, and overall health scores significantly increase.

This is an animal study with results that were seen as highly relevant to humans. Conducted at Peruvian University, the study tested the effects of Yellow, Black and Red maca on depression and cognitive function.

The animals were split into 4 groups: placebo, Yellow maca, Black maca, and Red maca. Each group received their dose daily for 24 days. Learning ability and depression were both assessed by the researchers.

The results showed improved cognition and learning. Researchers noted an antidepressant activity in all forms of maca, as well. [15]

SSRIs – medications for depression – are notorious for causing low libido and sexual dysfunction.

Researchers from the Massachusetts General Hospital (the psychiatry department) wanted to see if there’s a way around this problem.

They conducted a randomized, double-blind study with 20 depressed female patients, aged 36 on average, who suffered from SSRI-induced sexual dysfunction.

The subjects took either 1.5g or 3g of Maca daily during the study. The researchers found that the higher dose group had a significant improvement in their sexual function and desire, compared to the 1.5g per day group.

The study conclusion? Maca has the potential to alleviate SSRI-caused sexual dysfunction, with the higher doses appearing to have the biggest impact. Maca also has the ability to boost libido. [16]

Ever heard of The Health-Related Quality of Life (HRQL) questionnaire? It’s universally used by researchers to assess physical, mental, social, and emotional functioning of volunteers.

Simply put, the questionnaire is designed to assess the positive aspects of an individual’s life.

A study from Peruvian University used this questionnaire on 50 volunteers living 4,000m (13,000ft) high in Peruvian Andes. And here’s where it gets interesting…

Half of the participants were regular Maca consumers, and the other half was not.

The researchers chose people from Peruvian Andes on purpose because they were at higher risk of chronic mountain sickness (CMS).

Living at such high altitudes is linked to raised hemoglobin levels. This, in turn, creates oxidative stress measured by the inflammatory cytokine interleukin-6. [17]

Increased IL-6 is linked to obesity, heart disease, cognitive dysfunction and aging. What the researchers found was a strong link between consumption of Maca and higher health status scores, as well as reduced chronic mountain sickness scores. [18]

Although some studies have successfully used 3000-5000mg of Maca per day, lower doses are generally shown to work better.

So, around 1500mg of Maca per day is what you should aim for if your goal is to boost libido, sexual function, cognitive performance and general well-being.

Kurapeak contains a pure, concentrated 20x strength Maca extract which has a volume of 75mg but equivalent to 1500mg powder.

This makes it perfectly healthy for daily use, compared to aggressively dosed Maca supplements which may cause digestive upset.

Which Type of Maca is Best for Health?

Surprisingly, there are 13 different types of maca, each one having a different root color.

However, while they can look different, you’ll get similar effects from each one of them. All of them work for libido, physical vitality and cognitive function.

The only slight difference other than the looks is the nutrient content. In certain cases, red or black maca roots could have different nutrient ratios than yellow.

Maca is a perfectly safe, non-toxic compound. Taking it at doses higher than what’s found in Kurapeak might lead to bloating or intestinal discomfort.

That being said, raw Maca has high levels of glucosinolates, which are only an issue if you’re hypothyroid for example, but not if you’re otherwise healthy.

How Does it Feel to Use Maca Daily?

Maca has a distinct smell that some people are okay with, others not so much. Luckily, it’s found in Kurapeak capsules to make life easier for you.

You may notice a boost in energy levels after a few days of supplementing maca. It’s not the same kind of ‘rush’ you’d get from caffeine. But rather, more like you just had a great night of sleep.

Many people might find a boost in performance and stamina in fitness with Maca.

For younger folks, Maca helps to clear acne. You might find yourself becoming more productive in terms of work.

Older individuals find that Maca gives them a revitalizing boost in vitality. Without any jitters, anxiety or elevated blood pressure.

And if you live in colder climates, you’ll find that Maca will help you stay positive and ease the blues.

Using Maca daily helps aid other aspects of health too, such as bowel regularity.

Maca may be the most renowned supplement for boosting libido. However, it’s also being associated with an improvement in sexual performance overall, as well as a decrease in SSRI-induced sexual dysfunctions. The most surprising thing about Maca is that it mostly achieves these effects without affecting your hormones.

While some people don’t consider Maca the king of adaptogens, Panax (Asian) Ginseng could certainly vie for the title. A large amount of research shows that Ginseng can soothe cortisol, the stress hormone that can impair female vitality and cause a number of other health issues.

Together in Kurapeak, Maca and Ginseng work in unique yet complementary ways to enhance physical, sexual and emotional wellness – helping you to shine from the inside out.