It’s fair to say that most of us consider fat to be the opposite of fit. Every now and again though, there are things which do make you wonder.

Turn on World’s Strongest Man for example and you might see one guy pulling a truck along with teeth which his body type suggests are ordinarily used mostly for Doritos.

In fact there is a school of thought which argues that, with the right genes, it’s possible to be overweight and remain ‘metabolically fit.’. That basically means being classed as too, heavy but avoiding any of the health issues the condition normally causes.

So are there really a lucky few who can literally have their cake and eat it when it comes to balancing obesity and fitness?

Well according to the biggest study yet on the subject, that idea is a complete myth. Total pie in the sky.

Fat but fit has long been a controversial issue.

As recently as December 2016, Professor Haja Kadarmideen, a geneticist from the University of Copenhagen, identified 3 genes which seem to dictate where fat is stored on the body. Either on the outside, i.e. hips, thighs and arms, or spilling into the circulatory system, causing diabetes and fat to build up around internal organs such as the heart and liver.

Dr Kadarmideen’s suggestion being that if your fat is stored outside the body, though you might appear fat, medically you’re unlikely to be unhealthy.

There are even questions over how we define an obese person. Most doctors and nutritionists use something called the Body Mass Index (BMI), a ratio that determines your safe weight using height.

This method has roots going back as far as the 19th century and there’s no doubt it’s a flawed system. After all, as we know, not all mass is bad.

You can bet Dwayne ‘The Rock’ Johnson’s muscles skew his BMI in the wrong direction but nobody’s about to strap him into a girdle, are they?

Despite these issues however, a new large scale study appears to have put any idea that it’s possible to be fat and live risk free to bed once and for all. 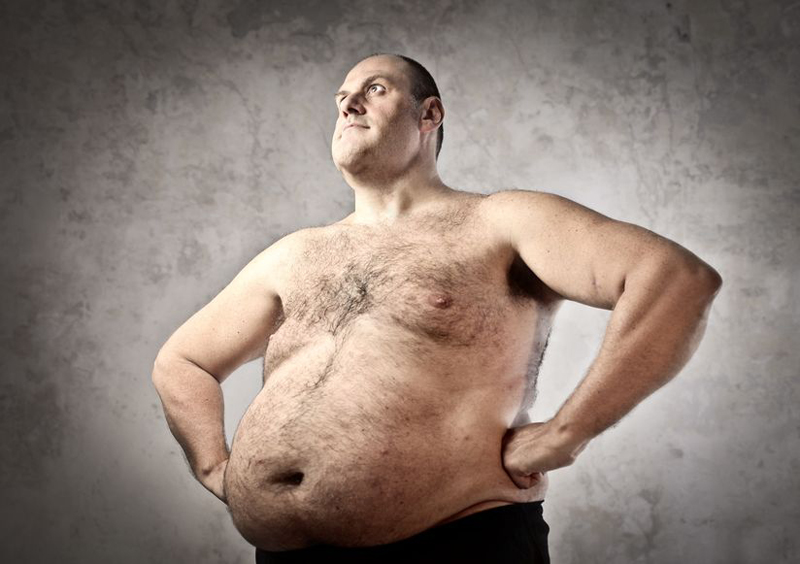 A team from the University of Birmingham in Britain looked at the electronic health records of around 3.5 million people over a 20 year period. Roughly 61,000 of whom went on to suffer coronary heart disease during this time.

Using the U.K’s Health Improvement Network database they selected subjects who were free of heart disease when research began. They then divided cases into groups based on their BMI and whether or not they had diabetes, high blood pressure, or elevated blood fats. All of these are classed as ‘metabolic abnormalities.’

Participants who started overweight but with none of these conditions were classed as ‘metabolically healthy obese.’ In other words, the holy grail of fat but fit.

The findings, presented to the European Congress on Obesity in Portugal, show that even apparently healthy obese people are still at a much higher risk of life threatening illnesses.

They are 50% more likely to develop heart disease than those is a normal weight bracket. They also have a 96% higher risk of heart failure and a 7% greater chance of a stroke.

What the experts say

“The priority of health professionals should be to promote and facilitate weight loss among obese persons, regardless of the presence or absence of metabolic abnormalities.”

But wait a minute, what about problems with BMI as a measure? Surely flawed methods lead to flawed conclusions?

“BMI is crude … but it is the only measure we have in the clinic to get a proxy for body fat. It is not realistic to use anything else in a GP setting or in the normal hospital clinic. We have to rely on BMI measurements, however crude they may be.”

While most agree that while BMI can be misleading in specific cases – such as classing a bodybuilder as obese – as an overview, generally it’s a solid indication of health and fitness.

Used in such an extensive piece of work as this new study, it’s reliable enough to clearly show that the idea you can live fat and risk free is simply not true.

“At the population level, so-called metabolically healthy obesity is not a harmless condition and perhaps it is better not to use this term to describe an obese person, regardless of how many metabolic complications they have.”

More evidence of the problem

Further evidence that BMI is a useful marker came in 2015 when the results of a Swedish study following one 1.3 million men for 30 years were published.

It reported that those with a healthy BMI at 18 were 51% less likely to die early in later life than those who were less fit in their youth. Unless that is the previously fit subjects went on to become obese, in which case any statistical advantage is lost.

This month The World Obesity Federation has officially recognized obesity as a disease due the wide variety of health problems associated with it. On top of the serious problems we’ve already touched on experts say you’re also upping your chance of 11 common cancers.

It probably is the case that a handful of fat people will go through life without any medical complications. In the same way that some 40 a day smokers will never get cancer. But all the evidence suggests living that way is a serious gamble.

One with the odds stacked against you.

The good news is, it’s never too late to get active and start protecting against these dangers. It’s amazing how quickly regular exercise can lower your risk factors.

So let’s all just aim for fit fit and stop feeding ourselves the illusion of fat but fit. Because frankly, we’ve had a belly full of it.