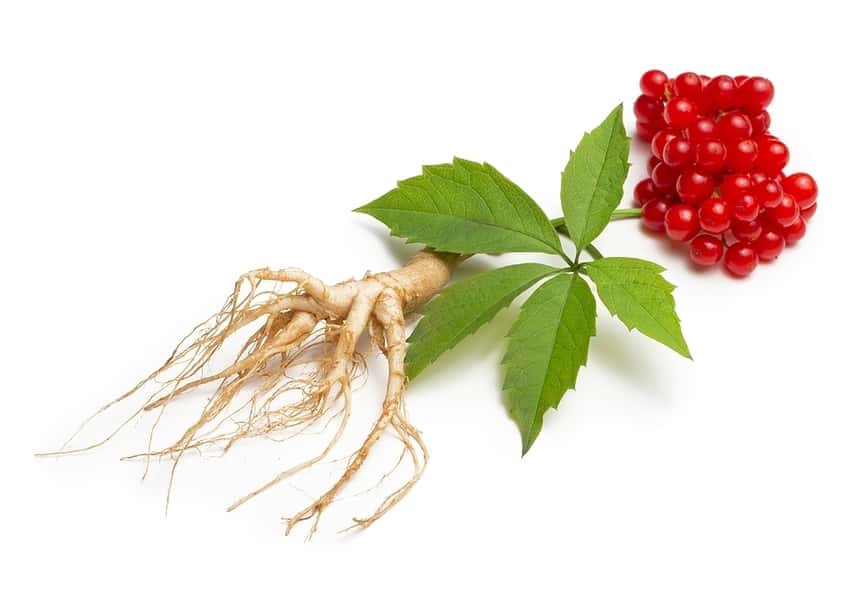 Korean “Panax” Ginseng is one of the most researched herbal medicines in the world. Also called Ginseng Root, True Ginseng, or simply Ginseng, it’s been used traditionally in Asia for over 2,000 years.

Panax Ginseng is the most powerful of the Ginseng family, which includes American and Siberian Ginseng. Its benefits range widely and include reducing stress and blood sugar, boosting libido and energy, and improving mental function as well as the immune system.

Ginseng’s effects on hormones make it a perfect female vitality ingredient. It helps to lower cortisol, a stress hormone that can lead to inflammation, unwanted weight gain and poor sexual function when chronically elevated.

Ginseng is also recorded to revitalize energy and can help you deal with daily stress. Many of Ginseng’s effects come from its active ingredients ginsenosides, which have strong backing from clinical studies for their ability to fight cognitive decline and physical aging.

How Does Panax Ginseng Work?

You’ll often see immune-boosting supplements with Korean ginseng, and plenty of studies have looked into its specific benefits on the immunity.

One study of Ginseng’s effects on the immune system found that the herb was able to enhance and adapt the innate immune responses of animals. This boost in immunity is suggested to be the result of increased activity of NK cells and T immune cells in our body. [1]

If you’ve ever drunk an energy drink, chances are it had Ginseng amongst its ingredients.

There’s a good reason why it’s often included there. Because it’s been shown in numerous clinical trials to have a number of powerful anti-fatigue mechanisms of action in our body.

In a 2013 study, 4 weeks of ginseng supplementation led to potent antifatigue effects. The study found evidence that these effects were the result of antioxidants in ginseng. [3]

How come antioxidants boost energy, you ask? It’s speculated to be due to how they protect and optimize mitochondria from free radical damage. As mitochondria are your body’s energy factories, it’s essential to keep them healthy in order to avoid fatigue.

A robust meta-analysis from 2016 analyzed Ginseng’s effects on reducing fatigue and boosting physical performance. It went on to confirm the existing evidence that ginseng has potent effects on combating fatigue in the body. [4]

One effect of Ginseng that’s highly relevant for Kurapeak is the improvement in menopause symptoms. In one randomized double-blind, placebo-controlled study, researchers recruited 72 women and split them into two groups;

One group received 3g of red ginseng per day. The other took a placebo. The results showed an improvement in menopause symptoms and cardiovascular function. [5]

A similar result was reported in another trial of 32 women, where Panax Ginseng enhanced their sexual arousal. [6]

Panax Ginseng can improve memory and learning – this has been well known in the traditional medicine for thousands of years. But studies are only now uncovering why it’s so effective at this.

Several trials have shown that compounds in Panax Ginseng stimulate areas of the brain associated with memory, concentration and mental arithmetic.

Interestingly, there’s evidence that shows how Ginseng can significantly potentiate neurite growth and nerve growth factor (NGF) in the brain. Which would explain why it’s so effective at increasing cognitive sharpness. [10]

Some people deal with chronic fatigue and lack of energy every day. In today’s world, especially in the West, this is a common side effect of our busy lifestyles.

But this type of fatigue isn’t ‘normal’ or a ‘natural part of aging’. Often it’s hard to pinpoint what exactly is causing this fatigue. Most of us tend to brush it off and simply band-aid it with caffeine-laden drinks. Or worse, a prescription stimulant.

While these options certainly have their place in some short-term scenarios, they don’t boost your body’s natural energy production. This is where Panax Ginseng steps in to save the day.

What’s more, these benefits continued even at their 2-year follow-up. [12]

In another long-term trial, 40 Alzheimer’s sufferers took 4.5g of Panax Ginseng daily for 24 weeks. Not only did their cognitive and behavioral symptoms improve, but the study also found evidence that lower doses of Panax Ginseng work just as well. [14]

Other clinical trials report equally promising results. A herbal supplement with Korean ginseng led to a 66% reduction in cognitive decline in people with mild cognitive impairment. [15]

Panax Ginseng is very effective when it comes to supporting female health. It works in a few different ways:

Panax Ginseng has been shown effective in adapting the body to higher levels of demands, helping the body to cope with stress more efficiently. In doing so, it can help females regain their youthful vitality.

A 2014 crossover double-blind, placebo-controlled study shows it can be of particular benefit for menopausal women.

The average age of women in the study was 51. They were split into two groups; control and Panax Ginseng. Final results showed marked improvements in female sexual desire and function compared to placebo. [16]

Panax Ginseng’s benefits can mostly be attributed to its active compounds – Ginsenosides. Here’s a little more about them…

Ginsenosides are plant chemicals also known as “Triterpenoid saponins.” These are unique to ginseng plants and similar to steroids in nature.

Interestingly, over 100 different ginsenosides exist. The main ones include Ginsenosides Rc, Ro, Rb(1) and Rb(2). All of these active compounds come from the root of Ginseng.

What’s even more impressive is that each ginsenoside has a unique effect on your body and brain. Each one is also metabolized differently.

However, it would be remiss of us not to mention other important components of Ginseng, which work together with Ginsenosides to provide the full spectrum of benefits of the plant.

The bottom line is: There’s a lot in Ginseng that is highly relevant to a supplement like Kurapeak – and by extension, female vitality. So much so that a few books could be written on the topic!

Out of all the adaptogens, Panax Ginseng is one of the best ones for boosting physical performance. It’s been shown in numerous studies to increase the body’s capacity to withstand physical demands without raising oxygen consumption. [17]

However, Ginseng improves your mental and physical performance in a different way from stimulants. There’s no “crash” after 4-5 hours like you’d get from using caffeine or a prescription stimulant. There’s also no mental load that can aggravate cognitive health in the long-run. If anything, Ginseng enhances it. [18]

We’ve previously touched upon ginsenosides. It’s these active compounds of Ginseng that deliver this stimulant-like effect in your body and brain. And are seen as responsible for improving overall quality of life.

One 2003 study review looked at 9 human clinical trials using 80-400mg of Ginseng per day. Studies were long and robust, lasting from 2-9 months. Interestingly, nearly every study found evidence that Ginseng improves the quality of life. [19]

In a 2016 study published in the Journal of Alternative Complementary Medicine, 52 people were split into two groups. One group took a placebo while the other took 2g of Ginseng extract daily for 4 weeks. After the results came in, the researchers concluded [20]:

In another similar study with 364 patients, 8 weeks of Ginseng treatment led to improvements in cancer-related fatigue. [21]

You may wonder if there are studies that looked into how Ginseng achieves these effects. One placebo-controlled, double-blind trial found that it’s the antioxidants in Ginseng that boost mitochondrial efficiency, which in turn leads to improved ATP (energy currency) production, and consequently – reduced fatigue. [23]

Mitochondria is one of the first things to break down when blood flow shuts down the nutrient and oxygen supply to brain cells. This is often seen in stroke patients.

This particular study was done to see if ginsenoside Rd in Panax Ginseng could protect the brain from stroke.

Researchers gave ginsenoside Rd to rats before inducing a stroke in part of their brain. They found that Panax Ginseng protects the rat brains from a stroke.

Interestingly, the way it achieved this was by protecting brain cells’ mitochondria, as well as preventing apoptosis (cell death). [24]

How does Ginseng have such powerful effects on the mitochondria, you may ask?

It all has to do with how it affects the so-called Krebs cycle. Ginseng is shown to help mitochondria squeeze maximum energy out of glucose from food – turning it into ATP.

This, in turn, increases the cell’s chance of survival when it’s deprived of nutrients and/or oxygen. And this is why Ginseng boosts mental energy when you start to supplement it. [25]

How Does it Feel to Use Panax Ginseng Daily?

Most people who take Asian Red Panax Ginseng report a boost in their energy levels. This includes both physical and mental energy.

Ginseng’s effects can be felt the most if you have chronic fatigue. But unlike common stimulants, it’s not the same jittery type of a boost, but rather a more ‘relaxed’ feel, like you’d just woken up from a great night’s sleep.

You may notice an increase in mental alertness from Ginseng. Your thinking should become clearer and quicker. Long-term memory and recall should also improve.

If you have a compromised immune system, Ginseng can help you avoid a cold or the flu. This makes it particularly useful to take during the harsh winter months.

The dosage that clinical trials use for Ginseng ranges anywhere from 100 to 6,000mg.

Korean Panax Ginseng is easy to digest and safe for most people. It’s heavily studied and shown to be well tolerated when taken in recommended doses.

While most people won’t experience adverse side effects from using Ginseng, there are some cases where you may want to speak with your doctor before taking it.

Such cases include having anxiety disorder (ginseng is a stimulant and in very rare cases may make it worse), taking blood thinning medications, or suffering from diabetes.

For best results, it’s suggested to take Ginseng for 4 weeks before taking a week off to retain its beneficial effects.

Panax Ginseng’s energy-boosting activity can be especially powerful when you’re under stress or under any kind of demanding task – physically or cognitive-wise. Rhodiola Rosea helps regulate stress response to maintain healthy cortisol levels and stable energy throughout the day.

Together in Kurapeak, Panax Ginseng and Rhodiola deliver complementary support for a healthier mind and body function – forming a potent adaptogenic duo for females looking to support their demanding, fast-paced daily lifestyles.