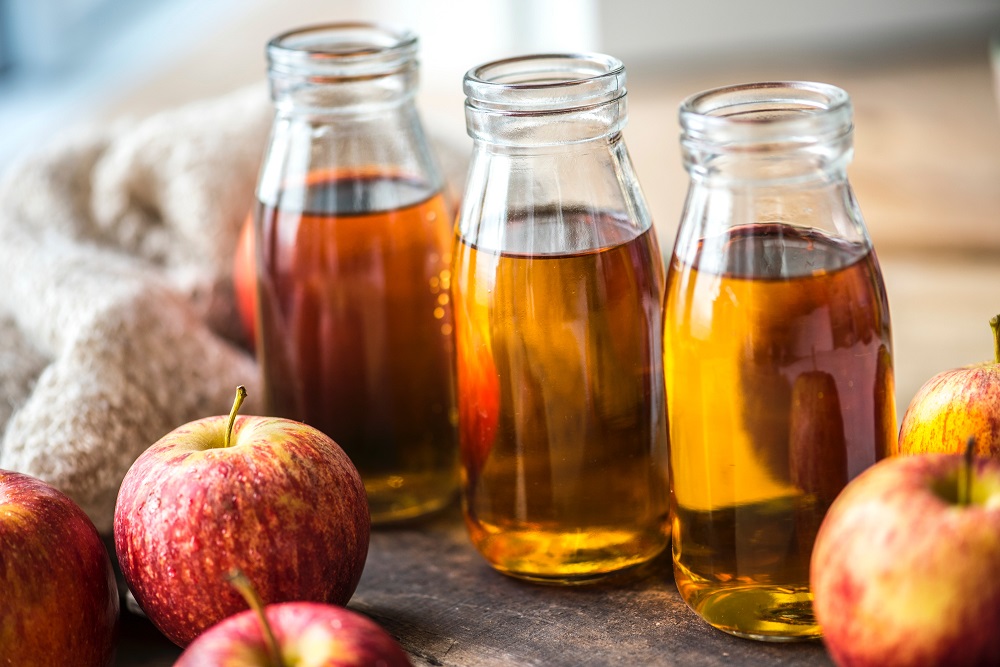 You’ve probably heard of apple cider vinegar and its health benefits before.

It’s one of the most popular traditional folk remedies in the world.

However, while some of the benefits of apple cider vinegar are exaggerated, it’s actually a quite healthy ingredient.

Apple cider vinegar is the most used type of vinegar for health purposes.

It’s made from fermented apple juice and offers a variety of benefits, some of which are backed by science.

It’s definitely not a panacea for all health problems like some claim it to be, but it can provide you with some unique benefits.

Before going more in-depth about benefits though, let’s quickly look at how apple cider vinegar is made.

The first step is to crush apples then squeeze the juice from them.

After this, you add bacteria and yeast to the juice which starts the fermentation process.

During fermentation, these microorganisms slowly turn the sugar from apple juice into alcohol.

In the last step of the fermentation, the acetic acid-forming bacteria turn this alcohol into vinegar as we know it.

Okay, now that we know a little bit about apple cider vinegar and how it’s made, let’s look at the key benefits it offers.

This is possibly the most popular benefit of apple cider vinegar.

Research shows that apple cider vinegar can increase your feelings of fullness, which makes you eat fewer calories.

A person that takes vinegar with a high-carb meal is likely to eat around 250 fewer calories over the course of that day. (1, 2)

A study with 175 obese people showed that those who consumed apple cider vinegar every day experienced weight loss and reduced belly fat. (3)

What’s more, the amount of weight they lost was directly proportional to how much apple cider vinegar they took, up to a certain point after which there were no additional benefits of consuming more apple cider vinegar (in fact, too much of it can be harmful to your health):

This study lasted for only 3 months, so it’s unrealistic to expect much bigger numbers. We’d like to see longer studies to determine if long-term consumption would lead to even bigger changes on the weight scale.

With that said, you should understand that apple cider vinegar is just one ingredient in your entire diet and lifestyle.

On its own, it’s unlikely to have any significant impact on your weight loss.

Make sure to accompany apple cider vinegar with an overall clean diet and regular exercise regimen for best results.

From cleaning and disinfecting, people often use vinegar to treat skin infections, nail fungus, lice, and even ear infections.

As I said, vinegar can even prevent E. coli from spreading and spoiling food. (4, 5, 6)

If you’re looking for a natural and healthy way to preserve your food, vinegar could help.

Some anecdotal reports say how apple cider vinegar helps you against skin conditions such as acne, however, there’s a lack of clinical evidence to prove this benefit.

According to Dr. Berg, apple cider vinegar can greatly improve your digestion and food absorption. (7)

See, there are a number of enzymes that lie dormant in your stomach, pancreas, and other organs.

Acid such as vinegar is one of the things that activate these enzymes to help you break down proteins.

As a result, you’re able to digest food faster.

How many times have you felt bloated after eating food?

Certain types of foods are hard to digest, which makes them ferment in your stomach, causing gas and bloating. That’s the last thing we want, right?

Perhaps the biggest health benefit of apple cider vinegar is its ability to improve your blood sugar levels and insulin sensitivity.

Patients with type 2 diabetes, in particular, seem to benefit from vinegar the most.

Type 2 diabetes is directly linked with high blood sugar levels. That’s either due to the body’s inability to produce insulin or due to insulin resistance which makes your cells unable to absorb glucose. (8)

If you’re looking to maintain optimal health, then keeping your blood sugar levels under control is critical.

One way to do it is to avoid refined carbs which spike blood sugar levels.

But you can also take apple cider vinegar.

Apple cider vinegar helps your body absorb the sugar from food, along with improving insulin sensitivity. (9)

However, if you take any blood sugar-lowering medication, talk to your doctor before increasing your vinegar intake.

Heart disease is the leading cause of premature death in the world. (12)

There are several “risk factors” that influence whether a person develops heart disease or not, these include:

Other studies show that apple cider vinegar can also reduce high blood pressure, which is another major risk factor of heart disease and kidney issues. (16, 17)

One human study showed that women who consumed apple cider vinegar with their salads had a lower risk of cardiovascular disease. (18)

There’s more human research needed to confirm these benefits, but so far, the evidence looks promising.

Cancer is a terrible disease characterized by abnormal cell growth.

As it turns out, vinegar has gained a lot of popularity for its anti-cancer effects.

While animal and test tube research confirms this, there’s a lack of human evidence to say for sure how effective vinegar is against cancer.

One study from China found that vinegar helped reduced esophageal cancer, but another study from Serbia showed it increased the risk of bladder cancer. (19, 20)

So while it’s possible that vinegar has anti-cancer effects, we’ll need to wait for more research to confirm these benefits.

Minerals such as magnesium, calcium, and iron are best absorbed in an acidic environment. If your stomach has a pH that pushes towards alkaline, you’ll have a tough time absorbing these minerals.

Vitamins B12, C, and K also require acid to be properly absorbed. (7)

See, your liver needs a certain amount of acid to create bile, which it then releases to your gallbladder. Consuming apple cider vinegar can help trigger this process – helping to release the bile that’s concentrated in the liver. This ultimately leads to less bloating. (7)

Helps Your Body Break Down Proteins

Your body breaks down proteins into amino acids with the help of certain enzymes. Acids such as apple cider vinegar help to activate these enzymes. (7)

This section of the article helps you answer that question. Here we show you the dosage of apple cider vinegar for different purposes and health benefits.

The optimal apple cider vinegar dosage for digestion is:

Preferably you should take it immediately before eating your meals. This will stimulate the digestive enzymes that will help you break down proteins from food.

So far, studies point that drinking 1-2 tablespoons of apple cider vinegar daily may help you lose weight and belly fat. (3)

Another reason why you may want to take apple cider vinegar is for general wellness. This includes reducing the chance of heart disease, cancer, or another health issue.

However, there’s not enough human evidence to confirm these benefits of apple cider vinegar, and as a result, there’s no recommended dosage for “general health” purposes.

How You Can Avoid Side Effects of Apple Cider Vinegar

Apple cider vinegar is generally considered as healthy and safe to use. But some people can experience side effects.

Here are some key points on how to avoid the side effects of apple cider vinegar:

While apple cider vinegar is not a miracle cure-all, it definitely offers some powerful health benefits. Especially those related to your digestive system.

Benefits of apple cider vinegar include:

You can drink apple cider vinegar, take it in tablets, or consume it with your salad. 1-2 tablespoons diluted in a glass of water before each meal seems like the optimal dosage for improved digestion, fat loss, and nutrient absorption.

As long as you don’t overdo it, apple cider vinegar is safe to take and may even enhance your overall wellness.