360 Lean, from supplement company 360 Cut, is one of the newer fat burners on Bodybuiding.com.  At the time of this review it had scored an impressive 9.1 out of 10 in customer feedback and frankly that’s the kind of buzz that we can’t ignore.

360 Lean sets itself apart from some other supplements of this type by not only promising improved fat burning performance, but also better memory, mood and mental focus. 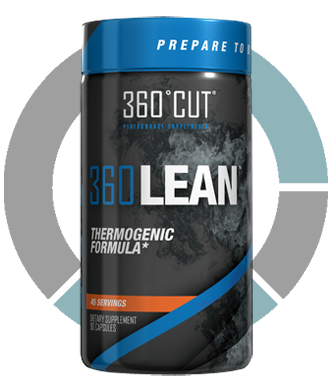 Some might feel these extras are not needed, but losing weight is also about attitude so anything that helps get your head right would be welcome…if it works.

There are a few ingredients in 360 Lean which aren’t exactly run of the mill, so let’s investigate a little further and see if all that praise is legit.

The amount of caffeine in 360 Lean means you’re bound to feel some effects and maybe even see some results, but for many it won’t be the smoothest road. This low score is because so many of the ingredients are either unproven or poorly dosed. 700mg of Glucuronolactone per serving is hard to justify, while cayenne pepper and yohimbe are way too light.

Below $30 is fairly cheap for a burner and the caffeine combined with the Sulbutiamine could well help your energy and metabolism. But considering all the places where 360 Lean is wide of the mark, there’s definitely more balanced burners out there offering better value for money.

There’s no in-depth testimonial section on the 360 Cut website so it’s only customer reviews we’ve got to work with. Even though these aren’t really consistent as far as detail and credibility, 360 Lean gets mostly positive reviews. However as you would expect some also report bad reactions, like sickness, jitters and insomnia. Even those who rate it suggest you take lower than the recommended dose and cycle it, something suggested nowhere by 360 Lean.

Several things give us cause for concern with 360 Lean. Firstly the main ingredient having no human studies to its name is a huge leap, but there’s also the amount of stimulants, directions and side effects. Even most fans suggest you take 3 capsules rather than the directed 4, cycle this supplement even though that’s not suggested and don’t take your las serving before 3pm to avoid insomnia. That’s an awful lot to learn through trial and error.

360 Cut are a company from Minnesota in the U.S with a professional looking website and a mid-sized range of supplements to their name, to support all aspects of a healthy lifestyle.

Update: Based on comments, the company is being sued as of end of July 2018 in relation to the labeling of the 7-Keto® DHEA on the bottle and the presence of off-label Ostarine that was detected by a third party lab. This relates to a lawsuit brought by an MMA fighter who ended up banned as a result of taking the supplement.

« Click for the rated fat burners »
~ Our Top Fat Burners ~

360 Lean recommends that you take 4 capsules in total. 2 in the morning before breakfast, then stagger the rest, taking 1 half an hour before lunch, another capsule in the afternoon ‘when needed. This actually not a bad amount of capsules or spacing. The best burners typically suggest 3-4 servings spaced out to keep the effects going throughout the day.

However it’s a little complicated with 2 then 1 before lunch and 1 just whenever. Far better to have 1 serving 4 times at regular intervals.

Many users recommend stopping at 3 capsules to avoid the problems below.

The amount of caffeine in this product makes it unsurprising that side effecrs have been reported. Sickness, jitters and insomnia seem to be common.

It’s worth noting that yohimbe can cause similar symptoms in some and Theobromine can cause skin irritation.

The cheapest we found 360 Lean was at Bodybuilding.com where $27.99 buys you a month’s supply.

A naturally occurring chemical popular in energy drinks and pre-workout supplements because it supposedly improves energy and supports recovery after exercise.  Except it doesn’t.  Not according to any studies we can find.  There’s just no evidence, aside from animal studies it works.  That makes the whopping 700mg here a huge gamble.

This is synthetic version of vitamin B1 from Japan, which is again aimed more at improving energy and mood.  This time there is some evidence that between 400 and 600mg can help reduce post infection fatigue.  So 500mg is potentially a useful stamina booster but we prefer our formulas all natural.

The first burner regular.  Caffeine is a great choice for two reasons; firstly it speeds up your metabolism, burning through far more fat, and secondly it provides energy to help you avoid the slumps that normally come with a low calorie diet.  The problem here is amount.  280mg is a lot for a single serving and means you’re getting well over half a gram in total.  Expect side effects.

A chemical relative of caffeine, this is a stimulant but not a psychoactive one.  It instead stimulates the heartbeat.  In theory then it could absolutely help with fat loss, but we’d like to see stronger evidence backing this up.  360 Lean pitches this as an appetite regulator, but evidence for that is scarce.  In rare cases can also cause side effects.

When WWBE is ingested it is converted into Salicylic Acid, which is the same active anti-inflammatory used in aspirin.  The nearest it comes to being useful in a fat burning context is increasing the power of some other useful compounds (none of which are in 360 Lean.)  No evidence it helps on it’s own.

This is a natural hormone which one study at least showed was able to reduce body fat when combined with a low calorie diet and moderate exercise, compared to just those two things alone.  However in that trial subjects were given 200mg.  360 Lean only offers 50mg over two servings/

Cayenne is one of the best natural ways of starting thermogenesis in the body.  The capsaicin in this ingredient melts away extra calories by heating the body up, then expends more again as our system tries to cool back down.  5mg is a pretty pathetic amount however.  Nothing more than a namecheck.  Disappointing.

Yohimbe is an effective fat burner in the right dose because it blocks the alpha receptors in the brain which limit fat burning.  Too much yohimbe can cause side effects such as dizziness and nausea but at just 5mg the real question is whether it will do anything at all in 360 Lean.

The active compound in this plant, Huperzine-A, is thought to be cognitive enhancer.  It stays in the body for a long time so should really be cycled.  This is not mentioned by 360 Lean.

There’s not much in the way of appetite suppression here – only 4mg of Yohimbe – and caffeine aside, there’s not nearly the strong thermogenic kick you would get with Green Tea or a decent amount of cayenne pepper.

With such strong reviews it’s probable 360 Cut works for more hardened burner users based on the stimulants alone.

However those looking for a smoother ride with more proven ingredients, fewer side effects and less second guessing the label could do much better.