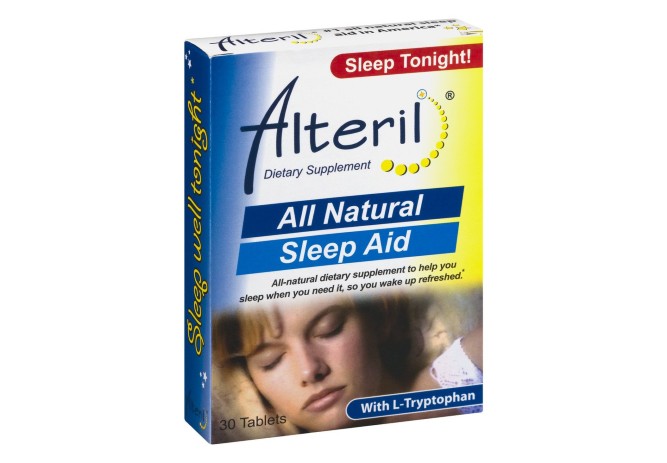 This is our Alteril review. In this post, we’ll inspect this so-called ‘sleep aid supplement’ by checking its ingredients, benefits, side effects, dosage instructions, and more.

Alteril claims to help you with:

We are keen to inspect its ingredient profile to see whether it will help you sleep. This will ultimately tell us if it’s worth buying or not.

Alteril is far from a bad product. It does have some great ingredients like tryptophan, which also uses an effective dosage.

But on the flip side, there are also a lot of ‘junk’ ingredients. As in, fillers that only increase the cost of this product, but not the benefits.

Plus, some users won’t like the price of $15 for just two-weeks worth of product.

With that said, here’s our breakdown the key positive and negative things about Alteril:

Alteril was founded by a company called “Biotab Nutraceuticals, Inc.”.

Since its inception in 2006, the company has been producing mostly natural health supplements and food products.

They appear to be based in the USA and ship worldwide.

We were a bit disappointed with the lack of information about the company, such as its history, how it all started for them, and what other products they sell. Their website also looks fairly outdated, which makes the whole experience a bit sketchy.

Here are the key claims about Alteril:

The ingredient formula of Alteril does have a few great ingredients, but it’s tarnished by the fact that some of them are hidden in a proprietary blend.

It’s never good to see a proprietary blend in a supplement. There’s no real reason to include it, except if you’re trying to hide something. 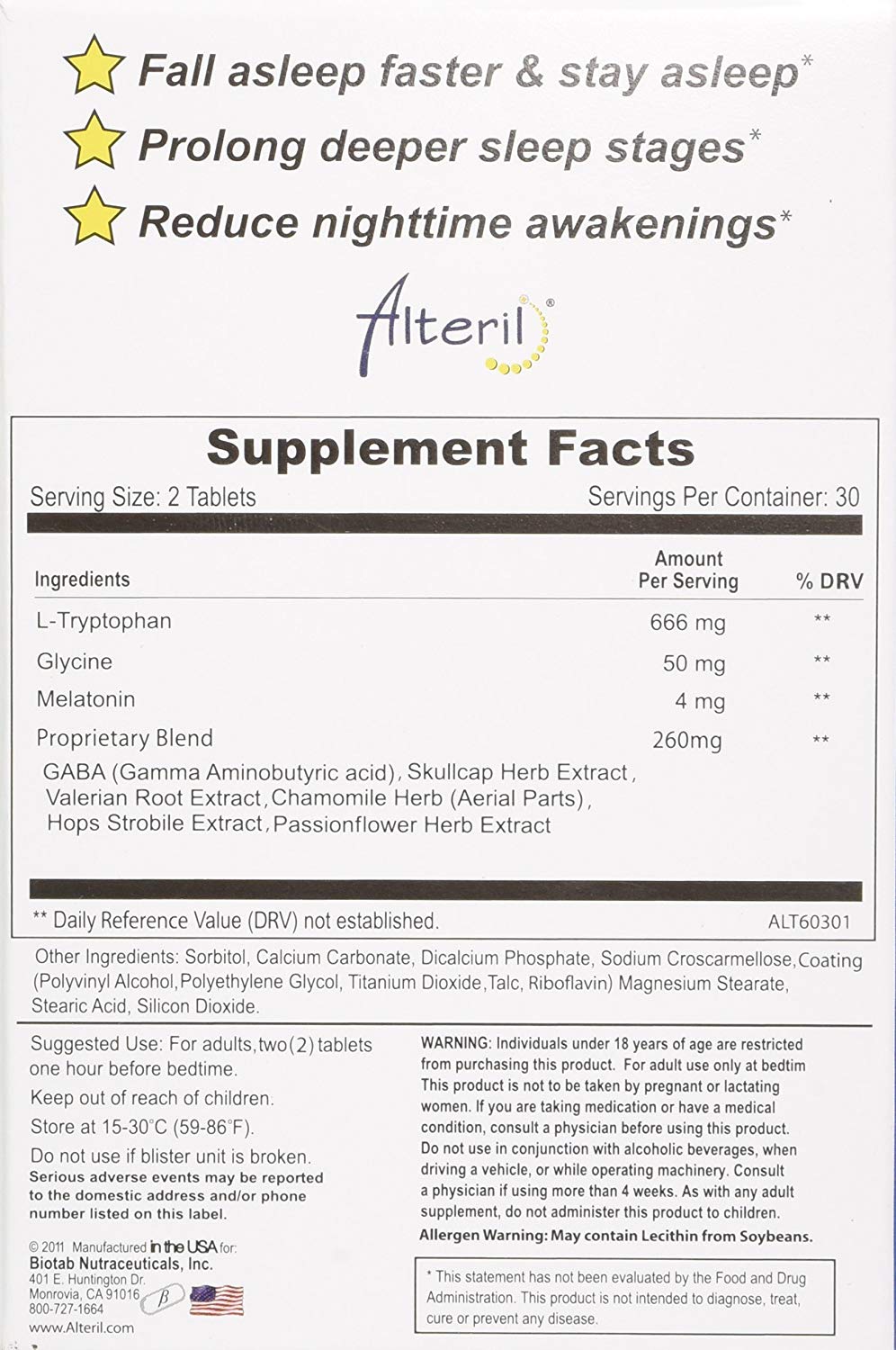 L-Tryptophan might be a fancy name, but it’s simply an amino acid found in food like poultry and cheese.

Tryptophan can help with certain things like sleep and mood, but you need to take it alone. Because it competes for absorption with certain amino acids. (1)

We like this choice in Alteril though. The dosage is great too.

Glycine is another amino acid in Alteril. It has some nootropic properties and may help you fall asleep faster. (2)

Despite this, we aren’t really sure why Glycine is in Alteril. Simply because we already get about 2g of this amino acid daily from foods like fish, meat, and nuts.

The 50mg of glycine in Alteril probably won’t make any difference.

Melatonin is a staple ingredient in a sleep supplement. Much like caffeine is in an energy drink.

Your body makes melatonin naturally when it’s time to go to sleep.

But certain things like stress, stimulants, and blue light from digital screens can all negate your natural melatonin spurts. This can make falling asleep pretty hard. (3)

Luckily, adding melatonin as a supplement is a great way to provide your body with this sleep hormone.

However, Alteril uses a synthetic version of melatonin. While this isn’t necessarily a terrible thing, we’d much rather see natural melatonin such as that from tart cherries.

GABA is your brain’s inhibitory neurotransmitter. In other words, it calms the nervous system down and helps you relax.

The issue is that your brain likes to make its own GABA, instead of getting it from the outside.

Research shows that supplemental GABA doesn’t make it past the blood-brain barrier. This makes it a pointless ingredient in Alteril. (4)

Skullcap is a herb from the mint family. It has long been used to treat anxiety and sleep issues. The evidence seems to agree with the anxiety part, but not with the sleep part. (5)

In other words, skullcap doesn’t have enough studies to back its traditional use for sleep in us humans.

Because of this, it’s not our favorite ingredient in a sleep supplement like Alteril.

Many people use valerian to calm their nerves. It’s said to be effective for anxiety, insomnia, and everything in between. Apparently, Valerian has an effect on your GABA brain receptors, which are known to induce feelings of drowsiness, relaxation, and reduced social anxiety.

To give you an example of what this looks like in practice, alcohol will raise your GABA levels. This will lead to that ‘buzz’ and increased relaxation.

Unfortunately, Valerian doesn’t appear to work on its own. In most studies, it’s been used together with other proven sleep aids. (6)

Here’s the thing with chamomile:

It makes a great tea that is known to help with relaxation. The issue is, however, that chamomile powders in supplements don’t appear to offer the same benefits as chamomile tea.

You can simply drink chamomile tea to help with your sleep. It’s cheaper and it tastes great, too.

We all know hops from beer. This natural ingredient acts as a mild sedative in your body. Studies show it can help you with everything from anxiety to muscle cramps at night. (7)

100mg of hops seems to be the dosage where it starts exerting most of these benefits. Unfortunately, the entire Alteril proprietary blend is only 260mg. It’s unlikely that hops alone are 100mg of that.

Passionflower is, unfortunately, one of those herbs with a lot of hype behind them, but not much evidence.

Most reputable studies don’t show any significant benefits on sleep. However, it might help you when you combine it with other sleep aids.

Still, this doesn’t make it a good enough ingredient on its own.

One question the readers of this Alteril review might ask is, is there anything missing from this product?

A couple of ingredients come to mind:

Magnesium is a mineral that helps your muscles and nerves relax. L-Theanine boosts GABA and alpha brain waves, both of which are known to induce relaxation.

Tart cherries, as we said, are the best natural source of melatonin. Much different from the synthetic melatonin found in Alteril.

The dosage instructions for Alteril sleep aid are 2 capsules prior to bedtime.

Ideally, you’ll want to take it at least 2 hours away from a meal, as this will ensure proper absorption of amino acids like tryptophan.

The entire package has 30 capsules, so this means this product will only last you about 2 weeks.

Alteril is a relatively mild supplement. It doesn’t have any risky ingredients in it, so that makes us conclude that it shouldn’t have any side effects.

The only issue we have is the proprietary blend. Since we can’t asses the individual doses of each ingredient, we also can’t fully asses their safety.

But the good news is, the entire proprietary blend is relatively small; with only about 290mg, it’s unlikely to do any harm.

Still, if you do have any concerns, we always advise talking to your doctor before buying Alteril!

One box of Alteril (15 servings) will cost you about $17 on Amazon.

It’s not the most amazing value for money considering that it only lasts 2 weeks.

And the cheap ingredients like synthetic melatonin certainly don’t help to justify this price tag.

If you wish to hunt for discounts, you can check both the official website and Amazon. As the prices can differ between the sites.

What Do Others Say?

Alteril’s producers have marketed this sleep aid really well, we’ll give them that.

The product has a lot of reviews on Amazon, with an average rating of about 4 stars. A few customers said they liked how this product helped them relax. A few others complained about side effects such as stomach cramps and bloating.

One user said that the product “helped me somewhat, but I couldn’t fall right to sleep and woke up some during the night.”

Another user named Char said that while Alteril isn’t as good as she hoped it to be, it’s still the best sleep aid she’d tried. Char says it helped with “falling asleep but not staying asleep.”

If you’ve stayed with us through this Alteril review, then you’ve seen that this sleep aid is a mixed bag of the good and the bad.

It has some solid ingredients like melatonin and l-tryptophan. But even then, melatonin is synthetic which means that the quality isn’t that great.

All in all, it’s not a bad product. It’s just let down by its price and the use of proprietary blends which effectively stop you from seeing what’s really hiding in this sleep supplement.

We do think there are better choices out there.