Animal Cuts is a fat burner that’s been around for a good number of years now.

In fact, it’s so well known that the only reason we haven’t reviewed it before now is because we could’ve sworn we already did.

But we haven’t, and it’s still selling strong, so better late than never I guess. 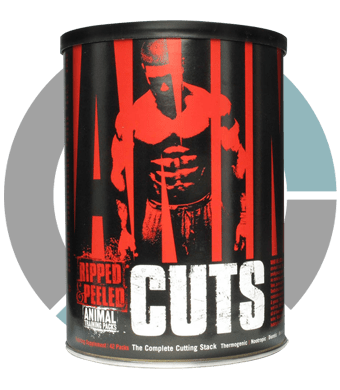 The first thing that jumps out about Animal Cuts is just how many ingredients there are in it. We’re not sure exactly how this thing was put together, but it wouldn’t come as a surprise if a Pick ‘N’ Mix scoop was involved.

(You might need that scoop to take this supplement actually but more on the servings later.)

There’s a lot going on here as you’ll see, but Animal Stack has a lot to do. It promises to:

We’d say we’re impressed if not for one thing.

Well, 9 things actually. That’s right there are 9 proprietary blends. No individual ingredient dosages for you paying customer and trusting user. No sir.

With this many components in there, it’s more important than usual to have exact amounts to see what’s pulling its weight and burning yours. But we’ll just have to do our best with the info we’ve got…

For us, the ingredients list here was as close as a supplement review gets to a Where’s Waldo puzzle. What you should be looking for was there – green tea, green coffee bean, cayenne, caffeine etc – but you had to pick them out a pretty confusing crowd.

There are some other useful ingredients dotted about such as Ashwagandha and a few more, but there are questions over dosages, and a lot of this is just filler. Entire blends in fact. Which is another serious issue. Thanks to the serious lack of detail on dosages, we can’t even be sure we’re getting enough of what’s good.

If it was a case of quantity over quality Animal Cuts would be getting top marks. You get a lot for your money. (I’m pretty sure I’ve lost a few pounds just from the effort of writing it all up) but quality is important.

Around the $30 for a burner with this much going on is still good, but if you’re more concerned with body weight rather than wallet weight, we’d recommend going for a more focused burner, that just aims to do one thing well: cut fat.

There’s no testimonial section on the official Animal website, which is a shame not only because these testimonials are more detailed and personal than retail site user feedback, but also because all the attention is really ripped guys who are close to peak physique. It’d be nice to hear from someone who, like a lot of us, are just starting that fitness journey.

For that we do have to go to retail site reviews. On balance they are positive, with people saying they feel they’ve got more energy, but there are a good number of unsatisfied customers too. The size of servings, lack of results and side effects are all complaints you will find.

Animal Cuts is produced in the U.S and as such has to fall in line with GMP regulations, so there are no problems with safety. That’s only half the battle though.

You might think a supplement as busy as this has left nothing out, but it has. By covering up individual dosages they are missing key information about whether it’s the good stuff or just along for the ride stuff that dominates this recipe. That’s arguably the most important fact. If they don’t trust you with it, why should you trust them?

New Jersey based company Universal Nutrition have been on the go in one form or another since 1977. They are very much geared towards the bodybuilding crowd so all their products – the Animal range and a few others – reflect that.

They have an A+ rating from the Better Business Bureau and we couldn’t dig up any dirt. If not for the proprietary blends this might’ve been full marks.

Users take 1 pack twice a day every day 4-6 hours apart. They should do this for 3 weeks, on training and non-training days, before taking a rest for a week.

This is a little misleading. Packs actually mean little bags of 9 capsules, one for each blend. That’s 18 capsules a day in total. (See what I mean about that Pick ‘N’ Mix scoop?)

It wouldn’t be so bad if this guaranteed the best results. But remember it’s not about the number of capsules, what’s key is the number of servings.

Any Animal Cuts Side Effects?

Some users have reported nausea and sickness after taking this supplement while others report difficulty sleeping. This is probably down to the amount of stimulants in Animal Cuts, but without exact dosages it’s difficult to say for sure.

One customer also had to stop taking the product after severe heart burn. That would be what we call the wrong kind of burner.

Apart from someone to tap the makers on the shoulder and say ‘Dude, do we really need all of this stuff in here’ Animal Cuts is also missing help with appetite control.

Cravings are inevitable so a good fat burner that can help take the edge of them safely is always going to get a bonus point from us.

Just about everything we like to see is in Animal Cuts, but you’ve really got to work hard to see it. There’s so much filler. Too much.

On balance, we would advise going for an option with a more streamlined, focused formula. One that has less awkward and better servings and has no risk of side effects.