BSN Clean is the latest natural fat burner from the Bio-Engineered Supplements and Nutrition company.

BSN Clean doesn’t promise anything revolutionary by burner standers – improve energy levels, manage weight and burn fat – but there’s nothing wrong with doing the classics as long as you do them well. 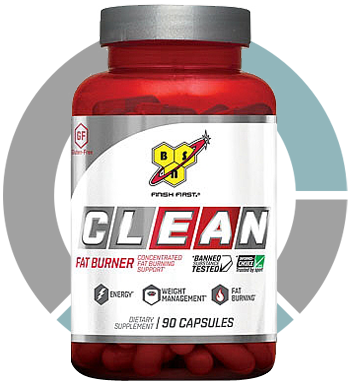 Straight away this has the advantage of no proprietary blends, inviting you to check out all the ingredients and their doses. Don’t mind if we do.

There’ll be a closer look at how well this approach works in a minute, but first the overall scores…

There’s stuff we like about BSN Clean. The green coffee bean is really well dosed, the caffeine is strong enough without going overboard and the cayenne pepper would be great with a bit of a top up. The main problems are what’s missing. The thermogenic profile would also benefit from green tea, and anything to help naturally control appetite would be helpful. We’re not convinced by grapefruit extract and yerba mate needs more research.

Nearly $60 is too much for this brand considering it’s only really half way there ingredient wise. There are fat burners out there which justify that sort of money from customers, but as it stands BSN Clean isn’t one of them.

We found very few customer complaints. BSN Clean is also made in the U.S and complies with all the country’s regulations so no worries there. As we’ve said all the ingredients are right there on the label with their amount, which is great. Our only problem is the price is high.

Customer reviews on retail sites are your only testimonals, which makes them very inconsistent in terms of quality. Opinion is similarly mixed. It’s mainly positive, but for every ten people who rate The Ripper there will one who saw little or no effect or even worse had an unpleasant reaction to the beta-alanine. So not exactly inspiring.

Bio-Engineered Supplement & Nutrition started in 2001 in a small shop in Florida and have gone on to become a popular company with global reach. They have a range of supplements besides this fat burner which sell well. A number of bodybuilders are happy to represent them and the latest team member is Irish MMA star Conor McGregor.

Users should take 1 capsule 3 times a day. This is spot on. It’s a perfect balance between ease of use and well-spaced servings to keep the ingredients topped up and fat burning going all day.

Unless you’re particularly sensitive to caffeine, we wouldn’t expect any negative effects from BSN Clean.

Where Can I Get BSN Clean?

Customers will find BSN Clean on the GNC website for $59.99, which buys 90 capsules.

This a great start. The chlorogenic acid in green coffee bean helps break down glucose in the liver, removing that as a source of energy for the body. Starved of its usual go-to supply, our systems start burning off those pesky excess fat stores. 200mg is a strong dose to keep this process working consistently.

The importance of caffeine to natural fat burning can’t really be overstated. It not only speeds up your metabolism, but the energy it provides is important sustains you through the fatigue of a low calorie diet. Some burners are keen to avoid stimulants, but they tend to pay the price in terms of effectiveness. Sensibly judged, as it is here at 115mg, you will have no problems.

More widely known in joint and bone supplements, cissus quadrangularis also makes a cameo in the odd testosterone booster. At least one study showed it helped slight weight loss, by reducing the appetite of obese subjects. No direct fat burning was reported

Grapefruit and coffee is often called the ultimate fat burning breakfast so it’s easy to see why Clean want to use the combination. Naringin and Hersperedin are the most important components and although they are not named here they are likely what is meant by ‘bioflavonoids.’ Again, the evidence justifying this inclusion could certainly be stronger.

Yerba mate contains caffiene so should strengthen the stimulant content. A 2014 study by Sheffield Universty found Yerba Mate increased fat oxidation. Only during exercise however and in much bigger doses than BSN Clean.

The capsaicin compound in cayenne pepper is brilliant for raising your body temperature, burning more calories, then more still as your system cools back down. Enough capsaicin is a great way to burn fat without even without doing anything. BSN Clean’s amount is disappointing though. It only clocks in at a tiny 30mg; we would hope for over 3 times that amount at least

BSN Clean is a burner heading in the right direction, but falls short of challenging the best products because of what it lacks.

The thermogenic profile is light, a few ingredients are relatively unproven and appetite control is missing altogether.

Until BSN sharpen up the formula a bit and maybe think about dropping the price we can’t put this effort in our top 3.