Destroy The Enemy is a new fat burner from Run Everything Labs with a name that doesn’t mess about. Let’s hope it  manages to shed fat, boost energy and improve focus as seriously as its title. 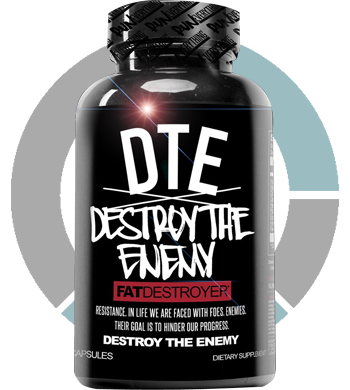 How Does Destroy The Enemy Work?

The first thing to say is that there are no proprietary blends here, which is great.  We get all the ingredients and amounts on the label.

That means we get a much better sense of what’s in DTE and the effect it’s likely to have.

We’ll get into these ingredients and their doses further down the page, first though the overall scores …

DTE definitely has some high spots.  There’s enough Acetyl-L-Carnitine to help keep your energy topped up and a solid amount of caffeine will get your metabolism moving. Coleus Forskohlii has promise as well.

After that though the evidence for the rest is less convincing, there’s the possibility of side effects and a couple of fat burning essentials are missing.

$40 is about mid-range for a fat burner.  However on a rolling monthly basis that quickly adds up so it might be an idea to save your cash for a more complete and proven burner.

There’s no testimonial section on the Run Everything website and a lot of the big retailers don’t stock it, so even customer reviews were hard to come by.  The few we found were positive but didn’t offer a lot of detail

Because Run Everything Labs has such a public and accessible face in You Tube fitness guru Dana Linn Bailey we never had any concerns about this product being a scam.  However some of the ingredients are more clinically sound than others and we have real issues with the use of Synephrine.

Dana Linn Bailey is a hugely popular fitness you tuber who a few years ago decided to launch her own fat burner.  Based and manufactured in the U.S this professional looking range is slowly increasing to incorporate muscle builders and various health and wellness options.

The suggested servings for DTE is one serving of 3 capsules when you wake, with an optional second serving added 6 to 8 hours later.

Either way, this is hardly ideal.  Most effective burners recommend 3-4 servings a day, spaced out evenly to keep active ingredients topped up.

Any Destroy The Enemy Side Effects?

Synephrine is commonly reported to cause sickness, headaches, dizziness and in extreme cases raise blood pressure dangerously high, which increases your risk of heart attack and stroke.

You can buy DTE from the official Run Everything website for $39.99 for a month’s supply.  It’s not currently on sale in the U.K.

This amino acid has a solid clinical track record of improving energy levels and stamina.  That allows you to keep going for longer in the gym and burn fat the old fashioned way.  The active dose is anywhere between 500mg and 2500mg, so the whopping 1000mg here is right in that wheelhouse.

Otherwise known as grapefruit extract.  Grapefruit has a reputation as an effective natural fat burner thanks to the polyphenols it contains.  Polyphenols have been seen to reduce fat but usually only by small amounts.  We’ve got to question just how useful 600mg will be.

Contains forskolin which increases the activity of cAMP, a molecule which can stimulate fat-loss.  May be slightly more useful in men as this it can also increase testosterone, a hormone that burns fat in its own right.  An active dose is usually 250mg of coleus forskohlii with 10% forskolin.  DTE has the first part but the percentage of forskolin is unclear.

Every good fat burner needs a stimulant and you won’t find better than caffeine.  In the right dose it will speed up your metabolism and boost energy.  This avoids the crashes you might normally experience with a low calorie diet.  250mg is a solid amount though may be a little strong for more sensitive users.

This herb, used in traditional Chinese medicine, supposedly helps the body better cope with the stress of exercise, vastly increasing energy and stamina.  Some over excited marketers will tell you this is three times more powerful than banned stimulant DMAA, but there’s no real evidence backing this up.  125mg is a lot to gamble on.

This is a flavonoid found mainly in citrus fruit.  Has shown an ability to increase metabolism when taken with naringin and Synephrine.

Sometimes called Bitter Orange extract, at least one study has reported this can raise metabolism but this ingredient really divides opinion. Not least because when taken with a lot of caffeine it can cause serious side effects.  We don’t feel the reward is proven enough to justify the risk of even just 50mg.

Studies have shown that rauwoulicine works in a similar way to, yohimbie.  It blocks the receptors in the brain which signal for fat to be stored therefore you don’t gain as much.  A good choice as it avoids the side effects of yohimbe.  At only 3mg though it’s difficult to say how useful it will be.

Appetite regulation is missing here.  It’s always nice when a supplement can support you in your battle against cravings.

A few more thermogenic choices would be nice.  Where’s the capsaicin to melt away those calories, or the green tea which not only does that but is chocked full of antioxidants?

Dana Linn Bailey has done well to stand out from the YouTube crowd but her burner is anything but stand out.