Since prehistoric times man has understood the truth that fire burns. And since 2009 Force Factor marketing man has tried to convince us that products like LeanFire XT burn fat, but is that true?

LeanFire XT admits that it does what a lot of burners claim to, namely;

Where it attempts to set itself apart is with what it calls a Mind Matrix. These are basically ingredients to lift mood and sharpen focus for when getting in shape starts to feel like a bit of a drag. 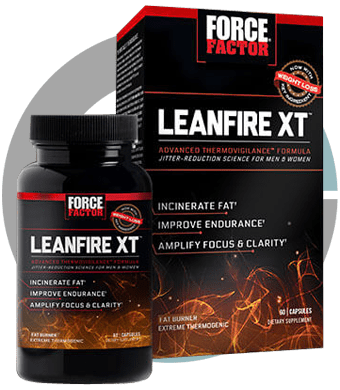 Actually these are not all that rare in burners now, but a good one can still be a great help so we felt this product was worth checking out properly.

Will LeanFire XT burn fat off our bodies or just blow smoke up our … well, you get the idea.

One hint might lie in the fact that the entire formula is a proprietary blend. No individual dosage information for you the customer then, just component names and a total amount.

Why not? We’re yet to find a convincing answer to that question in all our years of reviewing supplements. Still, let’s do our best to break down the mystery stew LeanFire XT is cooking.

Proprietary blends prevent us knowing exact amounts but with just under 800mg in total, we can be pretty sure in many cases there’s not enough. The best burners would give green tea and cayenne pepper nearly that just between the two of them.

But not being sure how much caffeine is never great and neither is any amount of bitter orange extract. Add to that some ingredients that don’t seem to have a lot going for them clinically and there’s not a whole lot left to like.

We can’t see how LeanFire is justifying a $60 price tag. Maybe if the small portion of formula had all the very best ingredients, like a posh French restaurants, they could get away with it, but that’s not the case.

It’s not the most expensive option we’ve seen, it doesn’t got to triple digits to be fair, but it’s right in the range of some of the best burners on the market and it doesn’t come close to them in quality terms. Buy smart, that’s what we say.

If you’ve read any of our other reviews, you’ll know that in this section we’re always banging on about a testimonial section on the official website.

Well, good news and bad news folks. The good news is, we’ve got one! The bad news is it’s about as enlightening as a Goth’s interior design choices. Just a short paragraph attributed to a first name and surname initial. No more help than retail site feedback.

Speaking of which, they’re a pretty mixed bag too. Only managing 3 out of 5 stars on a couple of large websites. Many report having more energy but just as many appear to have been disappointed by a lack of results.

Proprietary blends are always going to be  black mark when it comes to trust, as it is basically the company straight up saying ‘We’re not telling.’

But proprietary blends that contain ingredients that could potentially cause side effects is even worse. Add to that a hefty cost for a pretty lightweight product and we’re not about to be giving high marks.

Force Factor are a pretty successful outfit with a range of supplements covering various aspects of natural fitness. They have a Better Business rating of A+ but we’ve heard reports of the odd customer service problem as far as charges go. On the whole though no worries about respectability.

Users should take 1 serving initially 1 cap a day, half an hour before a meal or workout. This can be increased to 2 caps if you feel no adverse effects.

To be perfectly honest with you 1 cap or 2 caps doesn’t make much difference in the grand scheme of things. Because it’s still only one serving. Anyone who’s ever been camping knows that a fire will burn for a few hours then start to die down and then need refuelled. That’s exactly the same with LeanFire XT.

There’s no way one serving will sustain it’s fat burning peak for up to 12 hours of a busy day. That’s why most clued in burner brands favor 3-4 servings spaced out evenly over the course of the day to make sure your getting the most out of bioactive ingredients at all times.

Any LeanFire XT Side Effects?

We like all our supplements to reveal all their ingredient amounts all the time, but particularly when stimulants are involved. LeanFire XT contains caffeine, though how much we don’t know.

The devil really is in the dose with that. Enough is a difference maker, too much can cause nausea, headaches, insomnia and racing heart.

We also have Bitter Orange Extract here, which is a real concern, especially when paired with caffeine it can trigger the same effects as we’ve just talked about, plus raise blood pressure.

This could leave you at a higher risk of serious problems such as heart attack and stroke.

LeanFire XT is available from Amazon.com for just over $62, buying you a month’s supply.

In the P.R for LeanFire XT they make a big deal about how most burners forget how key the mind is to losing weight. This is true, but what about the part they forgot, the stomach?

There are so many safe and 100% natural ways to help regulate appetite now. It’s as simple as adding a decent amount of some high fiber ingredient which will expand once ingested and make you feel full. None of that in this Fire.

The name really is the most impressive thing about this product. It sounds great but look more closely and you’ll find that LeanFire XT is a bit of a damp squib, more likely to burn a hole in your pocket than anything else.