Trying to shift that excess weight and achieve the body you want can be a frustrating experience. Sometimes that’s putting it mildly.

If you feel like you’re well past the frustrated stage, then it could be that Furious Cuts is the natural fat burner for you.

In actual fact the name refers to You Tube celebrity Furious Pete, the man behind this product. Is Furious Cuts one of those good ones? 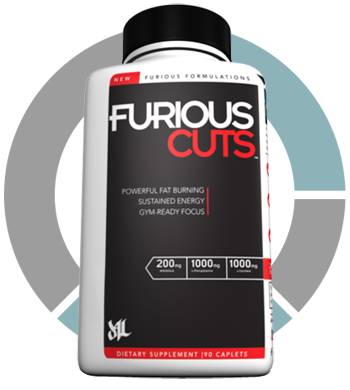 We’re nice and relaxed because we have no proprietary blends to deal with. That means we can analyze all the ingredients and their dosages.

In short, all the info. Always look for that. Let’s check out what we’re working with…

The emphasis with Furious Cuts seems to be more on providing energy and focus, the weight needing to be cut old school with plain hard work. This is why there’s 1g each of L-Carnitine and L-Phenylalanine.

200mg of caffeine will get your metabolism working but may be a little strong for some. Then we’re back to L-Tyrosine and Rhodiola rosea supporting you in physical exercise. This is all fine but why not combine it with a much stronger thermogenic profile to heat your body up and get it melting calories automatically?

90mg of cayenne pepper is pretty weak and it can’t hold up that end of the bargin on it’s own.

$40 is about mid-range for a burner and while certainly not a rip-off given that there are some useful aspects to this formula, the lack of thermogenics and appetite control make it an incomplete product. $40 is no small amount to be shelling out regularly, so it’s better to hold out for a brand that brings a bit of everything to the table.

Furious Pete seems happy to be his own advertising, assuring us that he takes Furious Cuts alongside some of his other products to get into great shape in just 2 months. That all sounds swell, but we really need more detail. We found 1 or 2 positive video reviews.

As we’ve said the only real danger that comes from Furious Cuts is losing a few hours sleep to the caffeine, and it’s great that he trusts users enough not to fob them off with proprietary blends.

However due to the lack of reviews and feedback from other users, it’s difficult to be sure just how much Furious Cuts contributed the body its creator is so proud of. Are the fat burning mechanisms really all that? Certainly the thermogenisis, which should be the main part of a burner, seems an after thought here and Furious Cuts is more geared towards inspiring you to hit the gym.

Furious Formulations is a company set up to sell Furious Pete. Not just his two supplements (a fat burner and a pre-workout powder) but his lifestyle and success as a bodybuilder/competitive eater/you tube star.

The focus being so much on one guy is cool in one way because it feels kind of personal, but you also lose something larger brands offer which is a wide range of experience from other users similar to your starting point and body type to compare to.

It’s a slick website with no real customer service worries but it’s too much about the man and too little about the product.

You take 1 serving of 3 capsules a day. This is certainly handy, just knock em back and off you go, but as far as getting results, it’s far from ideal.

We know from the way your body breaks down and absorbs nutrients, any single serve burner is likely to provide short term benefits at best. A few hours at the most.

Any Furious Cuts Side Effects?

The only problem we can forsee users having is with the 200mg of caffeine that’s here. If you’re sensitive to that sort of thing it may be a bit much.

Anyone who’s ever got a little espresso-happy will know what to expect in the way of effects: headaches, insomnia, nausea, racing heart, restlessness and so on.

Furious Cuts is available from the offical Furious Formulations website, $39.99 buying you a month’s supply.

The thermogenic profile could be a lot stronger here, not just by considerably bumping up the just 90mg of cayenne pepper but also adding some green tea.

A little help with appetite wouldn’t go a miss either. You’d think a competitive eater like Furious Pete would appreciate how hard it can be fighting the urge to chow down! A good amount of fiberous ingredients would fill your stomach and keep you feeling fuller for longer

Furious Cuts isn’t bad, but it’s not that great either. It falls into the trap a lot of burners made by bodybuilders do, spending more time setting you up for a gym session than helping your body better burn fat.

We get it, it’s a mindset thing and it’s not like the rest of us aren’t prepared to put in some hard graft! Seriously though, come on. Make with the thermogenics and help a brother (or sister) out here.