Looking through our emails to try and decide which brand to review next, I nearly passed over Genius Burn. I figured, oh well if there are geniuses behind it, what’s the point? It’ll be perfect, right? Then I remembered one important point.

In the supplement game there are two types of genius: The Formula Genius and The Marketing Genius. Ideally you what the first kind, but which of these is Genius Burn? 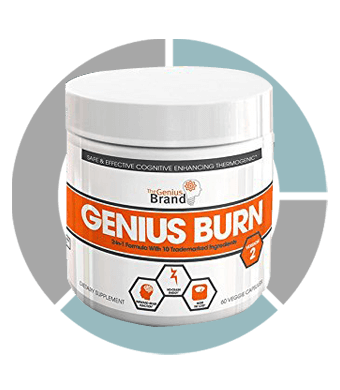 Turns out the reference isn’t to the manufacturer, but to the goals of product. This unusual product is nootropic/fat burner mongrel, supposedly able to boost brain function and sizzle fat at the same time.

In all, makers promise:

One red pen moment straight away is there are a couple of times when 2 or 3 ingredients are grouped together in proprietary blends. Just the names of components and an overall total. No individual dosages. We hate that and so should you. Real geniuses show all their data.

‘Genius’ looks pretty sarcastic from where we’re sitting. It kicks off with a tiny 125mg proprietary blend of 3 ingredients (tea, tuber fleecewood and loranthus pariciticus) none of which are convincing. Then there’s a solid dose of ashwagandha, which is good, but usually only a support player. Gymnema sylvestre may help to burn fat but is still largely unproven.

The only serious thermogenic choice is capsaicin and that’s only given a measly 25mg.

A small amount of theacrine is there to help with energy since Genius Burn is so against caffeine (or are they? More on that later.) Citicholine and Huperzia may help to sharpen focus too, but a few more weak components and another even smaller blend mean overall this formula is really disappointing.

At nearly $50 Genius Burn is nearly challenging the best burners on the market. In price at least.

In our opinion it gets nowhere near justifying that much money. Not just quality wise, but also because they expect you stack this already costly little number with another Genius product. (Nearly time for the big reveal…)

The Genius supplements website doesn’t offer any truly detailed testimonials to get your teeth into. Instead it lets it’s strong scores on retail sites like Amazon do the talking.

It does have a high star rating, but consider how little detail a lot of that feedback offers and how easy it is to fake. Plus factoring in some of the negative reviews flagging up side effects, it’s hard to be all that reassured.

What we will say for Genius Burn is it’s made in the U.S, so at least we know it’s not dangerous. Beyond that we’ve nothing but bones to pick. It’s not just the limp formula or the proprietary blends, it’s the whole ‘no caffeine’ shtick.

That stimulant-free high horse is in fact more of a phony pony. As it turns out, far from being against caffeine, they’re leaving it out because they expect you to buy it separately, from them. They’re saying, ‘We know Genius Burn could be better, pay an extra $15.99 to make that way.

Genius supplements are based in Seattle and have a very slick looking website. It’s plastered with sincere sounding mission statements, including, unbelievably that they don’t use stimulants. Not a lot of company info though.

They have a vast range of products encompassing weight loss, muscle building, mood management, brain boosting and something for every stage of a workout. We couldn’t dig up any serious customer service scams, so if not for the issues we’ve just gone through this score would be higher.

So consumers are given a degree of choice in how much they want to take, which is something we don’t see a lot.

We have our doubts but if you’re going to get any use out of Genius Burn, the higher end of this this scale is most effective.

3 evenly spaced servings will keep any active ingredients Genius Burn does have, adequately topped up and working for most of the day.

1 or 2 servings mean you’ll start to see a tail off in potency later in the day. When you consider this isn’t blowing any minds at its best, that’s not great news.

Any Genius Burn Side Effects?

Some users did report headaches and racing heart, which might seem odd for a caffeine free burner. Remember though it does contain theacrine, which boosts energy and is often used in pre-workout supplements.

Genius Burn is available from Amazon.com at just over $47 for a month’s supply.

Let’s get some decent appetite control on the go too please and maybe some B vitamins for energy.

If Genius Burn is any kind of genius, frankly it’s closer to a evil one. We’re surprised this supplement isn’t manufactured in a dormant volcano lair somewhere in the Pacific.

Whether it’s the poor formula or the marketing tricks to try to rinse more cash out you, this is one to avoid.