If fitness fans have any one thing in common, it’s probably work ethic.

Say what you like about us, we don’t slack off and ideally we don’t want our supplements to either. This has led to an increase in PM products. These are brands you take before bed which work through the night.

GH Peak from Blue Star Nutraceuticals is one of these. It’s a fat burner which claims to also promote restful sleep and support muscle growth, so by the time you lift your eyelids you’ll be better placed to lift everything else.

GH, as you may have guessed, stands for Growth Hormone.

GH is vital for things like protein synthesis and cell recovery and as with any hormone, poor sleep damages production. So in theory this could be seriously beneficial to performance.

That’s if it works of course. We’re promised: 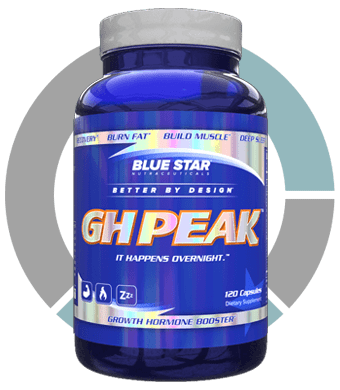 Frustratingly, GH Peak does use a proprietary blend, meaning we’re kept out the loop as far as the dosages of some ingredients. There’s really no excuse for that. Just because it works when our eyes are shut mean we should sleep walk into buying something that doesn’t give us all the facts.

Let’s try and work with the info we’ve got though.

Where GH Peak may help you based on its formula is the restful sleep part of the deal.

Melatonin and 5-HTP have both been seen to aid sleep in studies and while there’s little evidence L-lysine and L-arginine together can help GH levels, they can work as a natural anti-anxiety remedy.

That means Ashwagandha is left to cover pretty much everything else we’re promised and at 125mg, that’s just not going to happen.

Another way this product might help with your sleep is by looking at the price tag.

Fainting is a kind of sleep, right? At just under $90 for one bottle, something is definitely at its peak even if it’s not your growth hormone. Normally PM supplements are a little cheaper because they’re an addition to your daytime burner, but clearly not in this case.

We’re not sure GH Peak would be worth it at $45, we know it’s not at almost double that.

This user feedback is all we’ve got to go on though, there are no proper testimonials, so we’re lacking a lot of important details. We’re not saying all these positive reports are fake, but a good sleep always puts me in a generous mood, so maybe that’s what’s happening in the case of these users.

Blue Star Nutraceuticals are a well-known, reputable company, so although in this case they seem to have got a little over excited on pricing they’re no con artists.

GH Peak also complies with cGMP regulations so has been produced to the best possible standards.

The proprietary blend, is mainly the sort of pointless delivery system to better absorb GH Peak into your body, to be fair most active ingredients are dosed. That doesn’t change the fact that of its 3 goals it only delivers one, which is not a great trust builder.

Sitting on an A+ from the Better Business Bureau with a wide range of supplements available all round the globe, whatever else we take issue with it’s not Blue Star Nutraceuticals’ professionalism. They score full marks as a company.

All their output is overseen by David Gundermann from the University of Florida. Can’t fault them here.

GH Peak directs you should take 4 capsules once before bed on an empty stomach.

Some reviewers don’t, but I tend to go a little easier on PM supplements that are single serve. Yes one serving will wear off after a few hours, but it is the middle of the night, remember.

Setting your alarm for every 3 hours to top up doesn’t exactly scream restful sleep, eh? So this isn’t ideal but it is at least practical in this case.

Any GH Peak Side Effects?

You’re mostly in the clear with side effects when it comes to the ingredients we know the dosages for. Some of the elements of the XD Delivery system though could potentially be a problem though.

In high doses fumarate for example can cause nausea, diarrhoea or constipation. The blend is only 61mg, but without an exact break down of numbers, we can’t rule anything out.

Plenty. GH Peak promises to improve sleep, muscle building and fat burning but pretty much forgets to do the last two.

This is certainly not Blue Star Nutraceuticals’ best work. It will help Growth Hormone and fat burning only as far as quality sleep improves both your hormones and metabolism.

A poorly balanced formula that is way, way overpriced means GH Peak just isn’t worth it making this one for the brand’s hardcore fans. True Blues might buy it, but most others should look elsewhere.