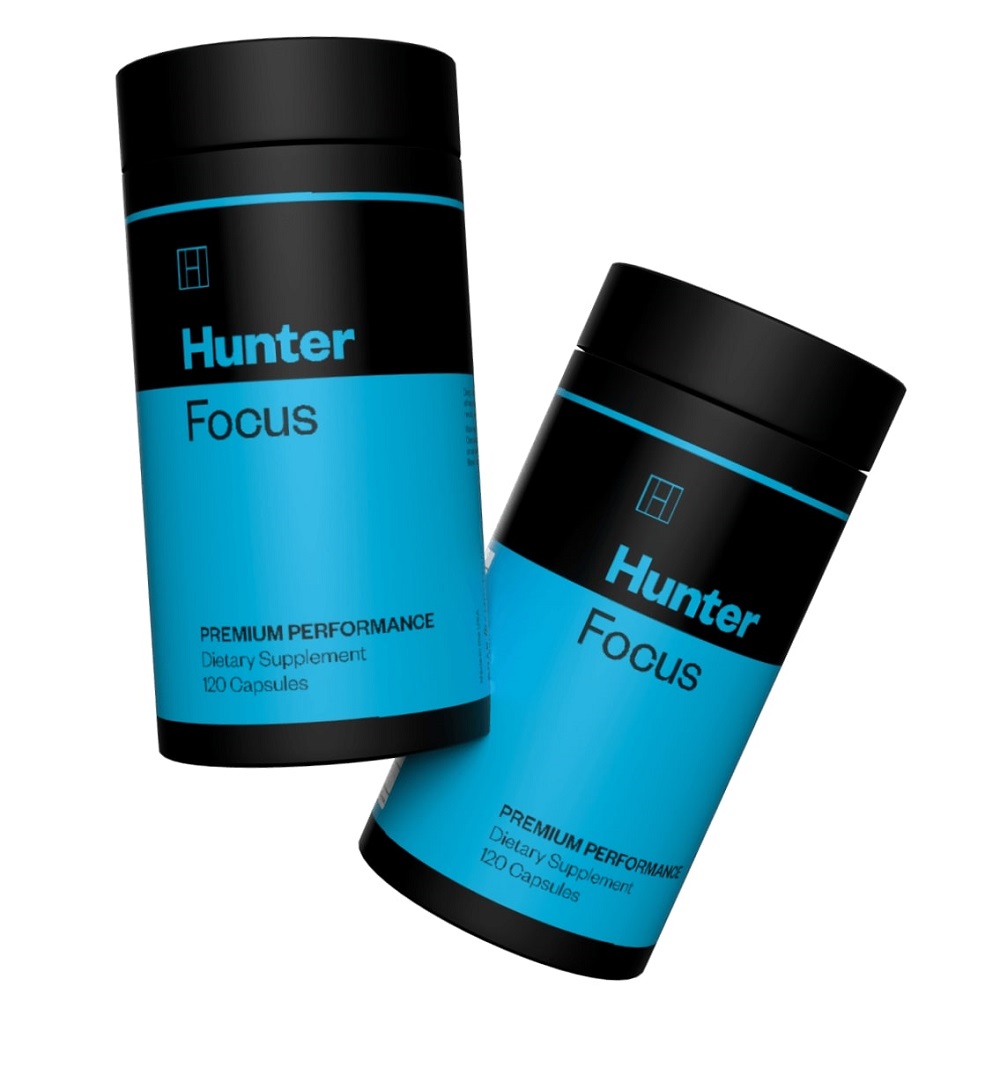 Hunter Focus is a fresh-faced nootropic that’s been gaining popularity ever since its launch.

The biggest talking point about this nootropic, unfortunately, is its price.

One bottle of Hunter Focus costs $75, which is considerably higher than the highest-quality nootropics on the market currently charge.

So, can Hunter Focus justify its high price tag? And more importantly, can it give other high-end nootropics such as Mind Lab Pro a run for their money?

Let’s look at the ingredients, side effects, pros and cons in our Hunter Focus review to find out!

Here we have pros and cons of Hunter Focus nootropic.

While there are plenty of positive aspects to this supplement. The product also has downsides when it comes to certain ingredients and the high price tag.

The name Hunter Focus implies what this nootropic is all about;

At least that’s what the producers say.

But can Hunter Focus really give you these benefits? And is it worth its extremely high price tag of $75?

There’s only one way to know – it’s by looking at the ingredients:

One thing that immediately stands out with Hunter Focus is that it doesn’t have any proprietary blends.

In other words, you can see all the ingredients and their doses clearly.

But there are some downsides, too.

For example, ingredients such as Passionflower have no place in a “focus” nootropic. Passionflower is known to induce sedation, making you sleepy and tired.

Secondly, we have ingredients such as N-Acetyl-L-Tyrosine which only comes at 200mg.

While this is an okay dose for some people, it’s not ideal if you’re on ADHD meds or have low dopamine levels.

And ashwagandha, while a potent adaptogen, can be dangerous for people whose immune system attacks their own body (an autoimmune disease).

Let’s take a closer look at each ingredient:

Are you constantly bombarded with stress and anxiety?

If the answer is “yes,” you’ll be happy to hear that Ashwagandha is one of the most effective mood-boosting nootropics.

This herb works by regulating cortisol and adrenaline, the two main stress hormones in your body.

As a result, Ashwagandha lowers stress, reduces anxiety, and enhances your body’s response to external stressors. (2)

It also boosts GABA and serotonin, two neurotransmitters that help you keep relaxed and happy.

However, ashwagandha isn’t for everyone.

If you suffer from any kind of autoimmune disease (e.g. arthritis, MS, psoriasis, Celiac), then you should not take ashwagandha. Ashwagandha can strengthen your immune system, which can be dangerous if the immune system is attacking your body.

Lion’s Mane is the only mushroom known to possess nootropic properties. It boosts NGF (nerve growth factors) in the brain, leading to neurogenesis. (3) Neurogenesis is the birth of new brain cells.

Not only that, Lion’s Mane Mushroom can repair and even reverse the damage to your nerves.

In fact, a study showed that disabled rats were able to walk again after taking Lion’s Mane Mushroom for an extended period of time. (1)

Citicoline is a highly bioavailable source of choline, and it’s an essential brain nutrient. Choline helps produce acetylcholine, a neurotransmitter that regulates your memory, thinking, focus, and cognition. (4, 5) Hunter Focus offers 250mg of citicoline per serving, which is a fair dose but not enough for optimal benefits – especially if you take racetams.

Passionflower doesn’t really have nootropic properties, in a sense that it doesn’t boost your cognition. Instead, it boosts GABA in the brain, which helps calm you down and improve sleep. Remember; the goal of Hunter Focus is to boost your focus, and passionflower does the opposite – it makes you sleepy and unfocused. (6)

Bacopa Monnieri is an adaptogen just like ashwagandha. But unlike its cousin, Bacopa focuses more on the cognition aspect of things. It’s shown to improve memory when taken long-term (8+ weeks). (7) The secondary effect of Bacopa is a boost in serotonin, which helps with mood. (8) Bacopa is also an antioxidant; protecting your brain cells from oxidation. (8)

When you’re under chronic stress, your brain chemicals get out of whack.

Specifically, dopamine, norepinephrine, and epinephrine (aka: catecholamine neurotransmitters) get depleted.

When these brain chemicals are low, you can suffer from:

However, NALT dose in Hunter Focus is on the low side. It may not be enough to notice full benefits, especially if you take ADHD medications such as Adderall or Ritalin.

Phosphatidylserine (PS) is an essential phospholipid. It makes up a large portion of the inner layer of your neuron membranes. It governs permeability and fluidity of brain cells, helping with the transmission of signals and neurotransmitters between neurons. Combined with DHA, PS protects the brain from cognitive decline and repairs damaged neurons. (11)

« Click for the top rated nootropics »
~ Our Top Nootropics ~

How to Take Hunter Focus (Dosage)

Each serving of Hunter Focus has 4 capsules.

The label says you should take 2 capsules, twice per day for optimal effects.

They don’t say when to take it though. My recommendation is to take 2 capsules in the morning, and 2 in the early afternoon.

You should take Hunter Focus with a meal for optimal absorption. This is because some of the ingredients are fat-soluble.

One Hunter Focus bottle has 120 capsules. So, if you take 4 capsules per day, it will last you a whole month.

How Long Does it Take for Hunter Focus to Work?

Some of the ingredients in Hunter Focus, such as L-Theanine and Maritime Pine Bark Extract, will work immediately.

By contrast, ingredients such as Bacopa Monnieri are shown to take 8-12 weeks to take full effects.

So if you want to experience the most Hunter Focus can offer, be sure to take it every day for at least 1-2 months.

Should You Cycle Hunter Focus?

You shouldn’t cycle Hunter Focus. Some of the ingredients need to be taken continuously over a long period of time. This way, they gradually accumulate in the brain and body where they exert their nootropic benefits.

Most of the ingredients in Hunter Focus are natural and safe.

That said, we have to mention ashwagandha, which can be outright dangerous if you have certain medical conditions, such as an autoimmune disease.

If you suffer from any kind of medical condition, make sure to talk with your doctor before taking Hunter Focus.

Another side effect you may have from taking Hunter Focus is drowsiness. This is due to passionflower which works to sedate you.

1-month supply of Hunter Focus will cost you $75.

This means it costs more than other top-rated nootropics on the market, including Mind Lab Pro (the most effective nootropic formula currently available).

It’s hard to find a reason to justify such a high price.

We would understand if this nootropic actually had better and higher-quality ingredients than its competitors – but it doesn’t.

Now, it’s not all bad in regards to Hunter Focus pricing.

The producers offer attractive discounts if you buy Hunter Focus in bulk.

For example, if you buy 2 or more bottles, you get free shipping (to the USA or the U.K.). And for every 3rd bottle of Hunter Focus you buy, you get 1 for free.

Roar Ambition is the company behind Hunter Focus.

They’re well-known in the supplement world, and specialize in producing sports supplements intended for athletes and fitness enthusiasts.

Only recently though, Roar Ambition has delved into the fledgling world of nootropics; creating their brand new Hunter “Focus” flagship nootropic. It is intended for busy professionals and men who want to “gain the edge in a busy world”.

Where You Can Buy Hunter Focus

Hunter Focus is only available on the producer’s official website.

Roar Ambition doesn’t sell it on Amazon or any other 3rd party site.

It uses clinically proven ingredients and has no proprietary blends.

But whether Hunter Focus is the best nootropic you can get – and whether it’s worth the price – is another story.

It turns out, Hunter Focus’ producers made a couple of rookie mistakes by including ingredients such as Passionflower, which gives you all but focus.

In addition, Hunter Focus didn’t include some of the key nootropics for cognition and mental resilience. Including Rhodiola Rosea and B vitamins. These ingredients form the basis of almost every high-quality nootropic formula.

A price of $75 per bottle demands absolutely best ingredients you can get.

There’s no room for mistakes.

If you’re going to compete against the best nootropics on the market, you should offer something that makes you stand out from the crowd – Hunter Focus has failed in this regard.