Most companies tend to have a flagship supplement for each fitness goal, one fat burner, one T booster etc. When you’re a company as big as Muscletech though, you can clearly afford to back a few horses in the same race.

We’ve looked some of the Hydroxycut fat burning family before, but the one which seems to be winning the supplement sibling rivalry at the moment is Hydroxycut Black. 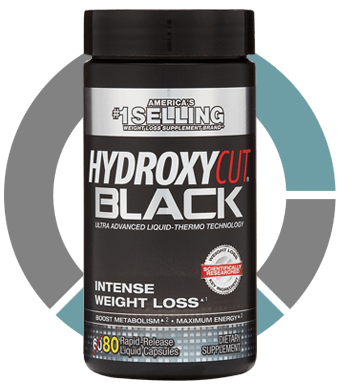 Not only is it a strong seller on Amazon.com but it boasts it’s the number 1 selling fat burner in the U.S. (Yeah I’ve got someone like that in my family too)

Unfortunately details of how it’s going to deliver this are anything but simple. Most (though irritatingly not all) ingredients’ dosage info is wrapped up in a proprietary blend. That means no individuals amounts, just names and an overall volume.

We hate that kind of leap in the dark where it comes to anything we’ll be putting in our body and so should you. But a bad habit doesn’t mean a bad burner.

Let’s see how Hydroxycut Black does…

There’s no doubt that Hydroxycut Black is missing a few things but for the most part what is there is strong. Green coffee bean is a strong fat burning performer and 200mg of caffeine will definitely get your metabolism and you going (possibly whether you want too or not – see our side effects section below).

Yohimbe is another proven choice, the only issue it can cause side effects in certain doses. That’s fine when you’ve got all the info right there on the label, but thanks to those pointless blends, we don’t here. Makes us a little uneasy is all.  Oh, and Yohimbe is banned in the E.U. so this is a U.S. only product.

Plenty of fiberous ingredients to help with appetite are a nice perk too.

There are question marks over individual dosages, sure, but the biggest issue may be be that the total volume of the formula is just 594mg. Some burners dedicate that to just 1 ingredient!

We think we might have found the secret to Hydroxycut Black’s impressive sales. When you consider that some burners have a triple digit price tag (I know, right?) just over $20 is a steal. This isn’t your supplement bootleg hooch either, Hydroxycut is a well known and popular range.

So if your looking for a brand you can trust that isn’t gonna remove most of the weight from your wallet it’s easy to see the appeal.

But like we say, this isn’t the complete burner. You’re missing key elements and your not getting a whole lot of recipe in each serving. That adds up to a slower route to your ideal weight and more money spent along the way. In the long run you may be better off paying a little extra for faster results.

Unlike a lot of supplement sites, Hydroxycut Black does have a few pretty detailed testimonials from everyday users. These are much more useful than the “BRILLIANT! Lost 150lbs of fat, gained the power of flight and could play the saxaphone after 1 serving” feeback you get on retail sites.

Speaking of retail reviews, they are pretty strong also, if a little less reliable. A handful of users were unimpressed however either by a lack of results or else the bumpy ride getting results. (See side effects section again)

Because Hydroxycut is made by Muscletech and they’re such a well known company we’ve no worries that this product isn’t safe. No sales scam klaxons either.

In fact, really the only thing we can fault them on are the few elements they missed out and the proprietary blends which leaves unwanted questions about side effects. It also shows a lack of trust in the consumer, so we’re just returning the favor.

Come on folks, why you gotta be that way? Get your stats out!

Muscletech are a huge company with global reach and their finger in many (low fat) pies. They have various different product ranges, supplementing almost everything you could think of that might ever need supplementing. The popularity speaks for itself.

Hell, even we like them, but until they drop their ridiculous fetish for hiding ingredient info, no home run in the company department.

Hydroxycut Black knows that the stimulant content might take a bit of getting used to and their serving schedule is staggered so you don’t have to be.

On days 1-3 you take 1 capsule twice a day, half an hour to an hour before your two main meals. If you can handle that from day 4 on, you take 2 caps twice a day before meals,

That’s a little complicated for a serving schedule that’s not that great anyway. Just two servings mean there’s going to be periods of the day where your burner isn’t as potent and isn’t working as hard.

To avoid this tail off, you’re better aiming for a burner with about 4 servings spaced out though the day, constantly topping up active ingredients.

Any Hydroxycut Black Side Effects?

You’ve gotta love Hydroxycut Black’s attempts to get round almost a third of their formula being stimulant.

““Maximize energy along with a sensory experience you can feel” 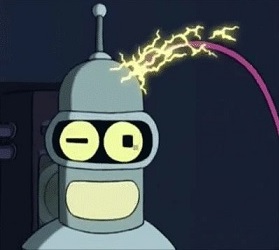 Maybe some thrill seekers really like to feel those stimulants kicking their butt, not us though. You want something that gets you in shape and makes you feel like crap at the same time, join the army and get a drill sergeant.

Most prefer burners to be a bit more ninja like: stealthy yet effective.

If you’re sensitive to caffeine, 200mg may mean headaches, dizziness, nausea, insomnia and rapid heartbeat. Amongst other too-much-coffee classics.

Yohimbe too could be an issue thanks to the mystery dose. You shouldn’t exceed around 30mg of yohimbe as it can cause stomach upset, tremors, anxiety and high blood pressure.

Hydroxycut Black is on sale at Amazon.com for little over $22.

The main thing we’re missing here are two of the best thermogenic ingedients out there. Green tea, which has countless other benefits besides melting extra calories and capsicain, found in something like cayenne pepper is also  great for inbuilt fat busting.

Hydroxycut Black isn’t bad, but there’s lots of room for improvement, We suspect it’s popularity has more to do with the numbers on the price tag than on your scales.

Don’t get us wrong, if you’re short of cash this month, Hydroxycut Black is in the running as a solid budget buy. But if you can afford better you can definitely find better.