Hydroxycut Hardcore Next Gen, from Muscletech, is one of the highest profile fat burners on the market. There’s a real buzz surrounding it with great reviews on reputable sites like Bodybuilding.com.

Just the kind of hype that gets us curious.

Hydroxycut Hardcore has the right look with eye catching packaging and makes all the right noises by promising ‘advanced scientifically tested weight loss’ along with ‘extreme energy and mental focus.’ 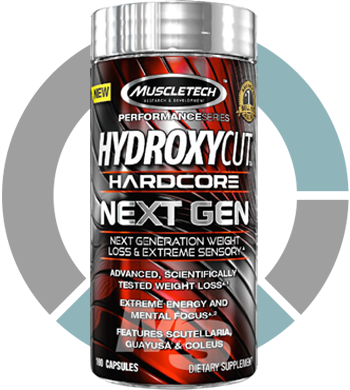 So that’s the marketing bells and whistles sorted, but what about the actual effects and results? Let’s not waste any time in finding out.

We’ll investigate these choices in detail further on in this review, but right now, let’s get those overall scores…

The green coffee blend is a great foundation for this fat burner, and if you can handle them the strong stimulants will keep your metabolism (and you) operating at top speed. The lack of appetite suppressants is disappointing and the potency of caffeine means it’s not for everyone.

In the U.S Hydroxycut comes in several volumes from 10 capsules to 180 and in the UK you can get 100 capsule option. All of these might be considered getting a little more than the average fat burner, so even though the bigger bottles aren’t cheap they are value for money.

Hydroxycut is made in the U.S so there’s no worries as far as safety. We can’t even criticise them for how much stimulant it uses because it’s all fully declared and up to the user to decide. Really the only issue we’ve got is a few ingredients that are light on research being attached to bold claims.

No testimonial section so just user feedback on retail sites to go on. This is overwhelmingly positive, as you might expect from a burner that sells so well, but we prefer to see the in-depth detail of lengthy testimonials

Muscletech are a huge operation with a dedicated customer base and worldwide reach. They have multiple supplements of all kinds making up the Performance Series, Essential Series, 5X-7 Series and others. Slick website and professional athletes going to bat for them our only quibble is with their belief in a few questionable ingredients.

Users will eventually take 2 servings of 2 capsules half an hour before your 2 biggest meals of the day.

We say eventually because Muscletech know the stimulants in their product pack a punch. They advise you slowly buid up your tolerance by going 1 capsule on days 1 and 2, 2 on days 3 and 4 etc.

Even 2 servings of 2 isn’t ideal for us though. Most successful fat burners favour 3 or 4 servings spaced evenly throughout the day. This keep effects consistent. Just 2 powerful servings close together leaves you open to dips in energy at points of the day.

Even the company aren’t pretending that the simulants here won’t be a bit much for some. If you don’t judge your limits correctly you can expect all the side effects associated with too much coffee. Headaches, nausea, heart palpitations and insomnia to name a few.

Customers can buy Hydroxycut from Bodybuilding.com in the U.S priced at just under $20 for a 100 capsules or just under $40 for 180. In the UK you can purchase from Lucky Vitamin.com at £28 for 100 caps.

Green coffee is a strong choice. Not only does it have thermogenic effects on the body – heating it up to melt more calories – but the chlorogenic acid in it prevents the breakdown of glucose in the liver for energy, meaning the body starts blitzing your excess fat instead. 400 mg is a strong showing, so no complaints from us here.

Caffeine is arguably the most effective natural stimulant for weight loss. In the right dose it’s pretty much unequalled as far as speeding up your metabolism to melt fat faster, and the energy boost it provides can help you avoid the stamina crashes associated with reduced calorie intake. We stress in the right dose because 290mg is quite a lot and may be strong for some.

This ingredient is a member of the mint family which in the past has shown an ability to stimulate enzymes and hormones in the body crucial for weight loss. In 2005 a study saw 30 overweight subjects take 250mg of Coleus forskohlii twice a day for 12 weeks. At the end of the trial most saw a reduction in body fat and an increase in testosterone. At only a 100mg here though, it’s unclear whether that success will be replicated.

Blue skull cap’s main strength in trials is lowering anxiety and improve mood without impacting greatly on energy. This could be crucial in such a simulant heavy product, which is why despite having no real fat burning credentials, 75mg still serves a purpose.

Studies show yohimbe very successful fat burner in the right dose. Especially when combined with caffeine. Too much of the stuff can result in unpleasant side effects such as anxiety and hypertension but at 40mg that’s not a worry.

This ingredient has a long history in Chinese medicine where it was mainly used to promote heart health. In a weight loss context though, it has been shown to suppress the adiponectin of fat tissue in rats. No human studies that we could find, so one of the less convincing picks.

This ingredient has a long history in Chinese medicine where it was mainly used to promote heart health. In a weight loss context though, it can suppress the adiponectin of fat tissue in rats. No human studies that we could find, so one of the less convincing picks.

We’d like to see the thermogenic profile boosted a bit, with green tea and cayenne pepper alongside green tea. And would it kill them to include a little help with appetite support for when the munchies hit?

Good sales figures don’t tell you everything but they must tell you something. Hydroxycut’s stimulant heavy approach clearly works for some but there are smoother, more balanced ways to burn fat just as effectively.