The natural fat burner scene is a busy one and it can be difficult for some products to stand out. But there are brands that have paid their dues and just their name is enough to make you sit up and take notice.

Hydroxycut is one of those, so we were keen to check out Muscletech’s latest effort – Hydroxycut HD.

We’re not saying that every Hydroxycut effort is a winner, but a couple have impressed us. So Hydroxycut HD’s promises of high definition fat burning, raised energy and sharpened focus had us optimistic. 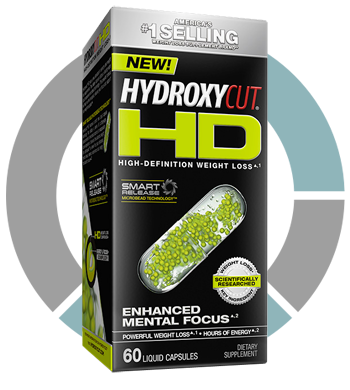 Frustratingly, all Hydroxycut HD uses a proprietary blend, meaning we don’t get specific dosages for any ingredients.

This is never great news, but it’s particularly annoying in this case because there’s only 5 ingredients. You want to be sure they’re all pulling their weight when it comes to losing yours.

As is the caffeine if you can handle it, but after that it’s a bit more of a let down. Ashwaghanda may well help your body cope with the stress of exercise better, allowing you to go for longer, but that usually needs a large amount and surely there are more direct fat burning choices which would’ve been better. L-Theanine is useful for blunting the effects of the stimulant, but if they’d gone a little easier it maybe it wouldn’t be needed at all.

There’s disappointingly little to promote thermogenis or contol appetite and the serving schedule isn’t ideal. Definitely not their best work.

Around $40 is not expensive in the context of fat burners, it’s about mid-range.  But at the end of the day $40 is still $40. It’s a fair chunk of change. So is Hydroxycut HD worth shelling out for on a monthly basis? We don’t think so.

It’s an unconvincing formula and there’s too much missing and for just a little more you can afford some of the very best burners on the market. Best to save your cash for better.

Reviews for Hydroxycut HD were suprisingly hard to come by. There’s no official testimonal section which is always our first stop, as a good one should have all the detail you need.

But feedback on retail sites is limited too. We could only find one or two across the many sites that sell it. They were positive but not heavy on info so it is impossible to get to make an informed choice based on these and a few You Tube reviews.

Muscletech are an established company with a great reputation, so what we can definitely say is Hydroxycut HD is safe. But presenting this formula as the very peak of fat burning excellence is pushing it a bit, especially with the question marks that exist over dosages. The research just doesn’t seem to back up the claims being made in this case.

We might have issues with Hydroxycut HD, but we’re not blind to what a huge and well run player Muscletech are. They have a wide range supplements making up their various diffrent successful ranges. Slick website and professional athletes going to bat for them it’s just a pity about some ingredient choices here and the use of proprietary blends.

Users are advised to take 1 capsule twice a day for the first day too establish their tolerance, then if they’re okay, 2 caps twice on the second and a maximum of 3 caps twice daily after that.

None of these hit the spot for us. 6 caps a day may sound a lot, but in reality it’s about serving placement rather than volume. 3 or 4 spaced evenly through the day would be much better.

Just 2 servings mean there’s going to times in the day when effects start to wear off and won’t be topped up again.

Any Hydroxycut HD Side Effects?

Traditionally Hydroxycut products don’t spare the caffeine, which is great for keeping your metabolism kicking, but doesn’t always make for the smoothest experience.

The fact that L-Theanine is included in the formula to take the edge off is a hint that the stimulants might be a bit much for some.

Anyone who’s ever overdone it on the coffee will know what might be on the cards here. Racing heart, insomnia, nausea, headaches etc.

Customers will find a month’s supply of Hydroxycut HD at Amazon.com for around $44.

A strong thermogenic profile is a must for any natural fat burner and Hydroxycut HD’s could be a lot stronger. Green tea is one of the best ingredients for this, as well as capsicain rich choice like cayenne pepper.

Muscletech are a great company and the Hydroxycut series has some real stand out burners, but Hydrocut HD isn’t one one of them.

Think of it like the Baldwins. If Hydroxycut Hardcore Next Gen is Alec, Hydroxycut HD is Stephen. But not Mike. Same name, not as much success.