In the minds of some a fat burner are still a cop out. There are those who believe that should drop unwanted weight the old fashioned way, with hard work and will power.

Now thanks to C.T. Fletcher, we have a compromise: Iron Addicts Will Power, the fat burner.

If you don’t know who C.T Fletcher is, believe me, no one would accuse this cat of cutting corners. If burners are okay by this guy, then we can all feel okay about taking them. But what about taking this one in particular? 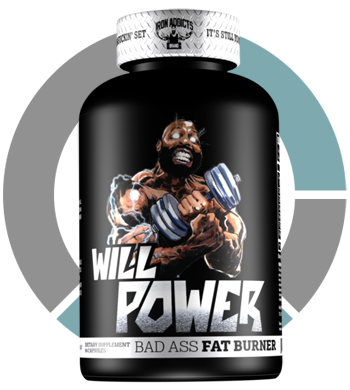 Well if Iron Addicts Will Power has the intensity in the bottle that the man himself displays on it, it should definitely burn fat, maintain focus & raise energy.

It’s no accident that that most supplements associated with serious bodybuilders, like Will Power, use no proprietary blends.

It’s about everything on show, all ingredients and their amounts, which is what you want.

Nobody knows better than these athletes that your body is a temple.

There’s one or two really solid fat burning choices here. There’s a great amount of green tea and a solid amount of caffeine, and plenty of Choline Bitrate to help keep you sharp while on a low calorie diet.

After that though it’s a bit of a mixed bag. Theacrine may provide extra energy and Rauwolscine could possibly help with appetite, but there are more proven alternatives that could’ve been chosen in both cases. Will Power has completely jumped the gun as far as credible research to back up things like Eria Jarensis and DMHA Octodrine, so we can only give a middling score.

C.T Fletcher is great at inspiring hard work, but Iron Addicts Will Power isn’t quite as good at inspiring hard cash. Around $50 is above average for a burner, the very best brands we’ve seen are only marginally dearer than that, and this just can’t hang with them.

Edit: We got notified in the comments that it was reduced on Amazon now to $19.99. Which changes things, it doesn’t look like a temporary sale so whilst that remains we’ve increased the score here.

There aren’t a whole heap of reviews we could find for Iron Addicts Will Power, even on retail sites where it’s on sale.

Feedback we did find on You Tube and various sites was generally positive though. One thing to be mindful of is when there’s a big character with lots of fans behind a product, sometimes the hype has more to with the man than the merch. A detailed and informative testimonal section would do lots to clear up any doubt, so it’s a shame there isn’t one.

A high profile person like Fletcher releasing his own brand has definite advantages. It’s his reputation on the line so he’s not going to risk putting out anything dangerous or controversial in the formula.

That said there are 2 or 3 ingredients here that have a bit of question mark over them and to present them as proven top line fat burners is a little cheeky. More research is absolutely needed on some of Will Power’s players.

C.T Fletcher isn’t just a driven bodybuilder, by the look of things he’s pretty savvy business man too. His website is stylish and engaging with him right at the centre. Along side Will Power for fat burning in his small range there’s brilliantly named supplements covering stim pump, pre workout and whey protein.

It’s not the widest variety in the world but we couldn’t dig up any customer service problems that gave us concern. We dig the style even if we disagree with some of the substance.

The product recommends that you take one capsule a day for the first few days to check your tolerance, the gradually work up to no more than 3 caps a day.

There’s no real guidence on when to take the 3 when you reach max dose, so provided your smart and space them out evenly during the day, this isn’t bad.

Any Iron Addicts Will Power Side Effects?

The very fact that C.T Fletcher suggests you ease yourself into this supplement tells you the stimulants might be a little strong for some. It’s not just the caffeine, which should be fine on it’s own, but DMHA Octodrine is there too.

Although we haven’t seen any major side effects reported, clinically speaking this ingredient is still a work in progress so we’d advise caution.

Will Power is available from Amazon.com for $49.99 which gets you a month’s supply.

The thermogenic profile of Will Power could use a boost. Backing up the useful green tea amount with a capsicain rich ingredient like cayenne pepper would be a good idea. You don’t always have to be on a leg press machine to feel the burn you know.

Appetite contol would’ve been helped by some fibourous ingredients that expand in the stomach and keep you feeling fuller for longer.

Will Power isn’t terrible and with such a charismatic and ripped spokesman it will likely do pretty well. The actual formula though is pretty uninspired. Fletcher makes a big thing of the hard work you still have to put in at the gym while taking Will Power, and honestly any results you see are more likely to be down to that.

If you ask us Iron Addicts Will Power isn’t the fat burner for you. If C.T Fletcher asked us though we’d say it was the best thing since sliced bread, put us down for 20 crates.