LeanMode is a natural fat burner from EVLution Nutrition which aims to cut fat, boost your metabolism and suppress your appetite, while also raising your mood and energy levels.

It bills itself as ‘stimulant free’ which isn’t strictly true as one or two ingredients have a small amount of natural caffeine. 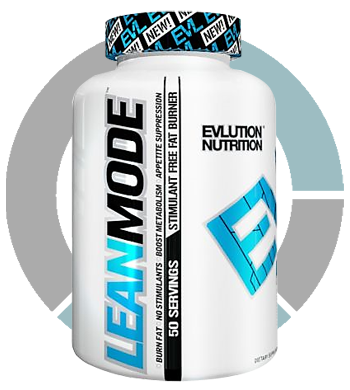 We’re not knocking that, as far as we’re concerned sensible use of stimulants are crucial to fat burning.

If anything the challenge for this product then is to prove it can successfully cut fat using so little stimulant.

Let’s see what they’ve replaced it with and if it’s up to much.

A bit of a mixed bag really. Green coffee bean and green tea give Leanmode genuine fat burning credentials, while Acetyl-L-Carnitine will help some. Garcinia Cambogia fails to cut it as an appetite suppressant though. Then of course the biggest gamble just doesn’t pay off. CLA simply can’t match caffeine for boosting metabolism. It speaks volumes that 2 of the best ingredients here do actually contain the simulant.

Leanmode being available so widely means chances are you will more than likely find good value somewhere. However, the reasonable price has to be weighed against the actual quality of the product and while this burner has a few good points, it also falls short in a couple of areas.

Nothing about LeanMode suggests it’s an out and out scam but there are a few small issues as far as the ingredients are concerned; persisting with less than impressive ingredients like garcinia cambogia and CLA, for example. CLA is crucial to the stimulant free angle but representing 500mg of it as effective when results were only obtained using at least 8 times that is a little cheeky.

Similar to the ingredients in many ways, quality varies. The testimonials for LeanMode are drawn from reviews on the online sites where the product is available. Although mostly positive, they differ greatly in terms of detail, understanding and credibility. As a result it’s hard to get a sense of whether LeanMode is really worthwhile.

EVLution Nutrition are a well-established supplement company with a range of different products on the market. Their supplements are made in the U.S and are therefore subject to all the good practise manufacturing laws which go with that.

« Click for the top fat burners »
~ Our Top Fat Burners ~

Users should take 2 servings of 3 capsules a day.

3 capsules sounds about right but it’s a pity those aren’t divided up into as many servings. This would’ve made sure the active ingredients were kept working consistently.

As it is after you’ve taken your two servings you’ll likely see a drop off in effectiveness later in the day.

No side effects have been reported and we wouldn’t expect any.

Where Can I Get LeanMode?

Customers will find LeanMode at Amazon.

An attempt at appetite control, which is good because a lot of burners forget that. Just not a very good attempt sadly. This enhances flavour and the idea was if the flavour lasted longer you wouldn’t get hungry as quick. However, studies have pretty disproved any suggestion it works though. 500mg gone to waste.

Now this is a bit more like it. The chlorogenic acid in green coffee is great for breaking down glucose in the liver, preventing the body from using it as energy. Robbed of that source your system starts burning through those pesky fat stores instead.

This is the choice most stimulant free burners end up making to replace them. To be fair, it looks good on paper. CLA does interact with PPAR receptors, key to regulating the burning of fat, but it’s not strong enough to do anything at less than about 3g. No substitute for the metabolism cranking power of caffeine.

This is of limited use in a fat burner. No direct weight loss properties but it can reduce muscle damage in exercise allowing you to keep going for longer. It also boosts energy but mainly in more elderly subjects. Younger users tend to not to see much benefit at all. Another 500mg which might’ve been better spent.

A second really strong choice and the second time some caffeine has snuck in. The catechins in green tea cause a surge in the fat burning hormone, norepinephrine. This starts your body heating up internally melting away loads more calories as it goes.

Caffeine! It’s got a small amount, but not nearly enough. Used sensibly there’s nothing better for naturally and safely getting your metabolism moving. In the sort of doses that fit in a supplement CLA can’t compare to it, so stick with what works.

There are certainly high spots you can pick out of LeanMode as a product. Natural choices, no proprietary blends with green tea and green coffee bean. The Acetyl-L-Carnitine may help some also.

But the good is balanced with some downsides. LeanMode is unlikely to help suppress your appetite despite what it may claim, and removing most of the caffeine really takes the edge off LeanMode’s effectiveness

If you are sensitive to caffeine though, that combined with the very reasonable price might make LeanMode a choice for some limited results. But for the rest of us there are better options out there