Exercise and diet are always going to be essential to losing weight.  Add a quality natural fat burner to that combo though and you can get results even faster.  It’s just a matter of choosing a brand that means business.  Well they don’t come more all-business sounding than Lipo-6 Black Intense fat burner from Nutrex.

But, as Sgt Larvelle Jones from the Police Academy movies (Google it) proved there’s a big difference between what something sounds like and what it actually is. 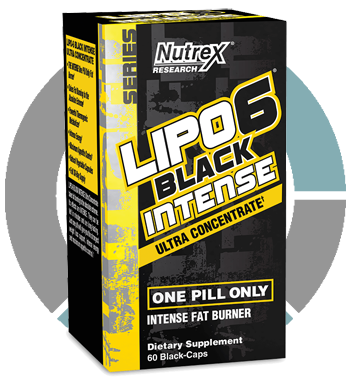 So can Lipo-6 Black Intense really help you cut fat, boost energy and curb appetite?  There’s only one way to find out: the formula.

All the ingredients here are in a proprietary blend, a pointless marketing gimmick that keeps us out of the loop on dosages.

We only get a list of names and an overall mix volume.  In this case the total is just a tiny 693.5mg.

It’s not promising but we’ve got a strict no spoilers policy here at Cates Nutrition so ley’s press on with the review.

It’s not about what’s in Lipo-6 Black Intense (although there are problems there too) more what’s missing.  There’s no great thermogenic ingredients like green tea or cayenne pepper for example.  Plenty of caffeine, sure, that will help your metabolism, but the amount could be a little much for some.  Yohimbe is here the main appetite controller, but we’ve no how much there is and that means possible side effects.  Same goes for Synephrine, which can be dangerous paired up with so much stimulant. L-Tyrosine has its indirect uses, but could have given way to make room for more direct fat burners.

Lipo-6 Black Intense is up in the $60-70 region, which is not unheard of for a burner but it’s the high end of the market. If a company wants top dollar from you, they damn well better be on top form for you. That’s no the case here. The stimulants ensure it will have an effect, but there are far better designed burners out there much more worthy of your cash.

-Lipo-6 Black Intense is still pretty new so there’s not a lot of reviews to go on. This wouldn’t have been so much of a problem if there had been an offical testimonal section somewhere with detailed user experiences. The feedback we did find was very split. Some enjoyed the extra energy the product gave, while others found the lack of fat loss disappointing.

There’s enough missing from this formula to make pitching it as your best route to losing weight pretty shady, but the biggest problem is the chance of side effects. Three separate ingredients are a risk here, two of which we’d be more sure about if all the ingredient amounts weren’t hidden from you the customer. If they don’t trust you, why should you trust them?

Despitethe problems we’ve got with this supplement Nutrex Research are a well established company with a wide range of supplements, worldwide reach and plenty of fans. There’s is an extremely professional set up and we couldn’t dig up any serious customer service problems.

« Click for the best diet supps »
~ Our Top Fat Burners ~

Users take one capsule a day.

Nutrex make a big thing of this on the packaging, and while it’s definitely handy, it will undoubtedly short change you as far as effects.

One pill of just over 700mg, might give you a short lived burst of energy and fat burning but there’s no way it will keep going for 24hrs.  Not only will any weight loss effects start to fade, with so much stimulant in one hit, there’s a real risk of crashes as the day goes on.

The best burners know this and favour 4 evenly spaced serings a day to keep effects topped up as long as you need them. That’s what you sohuld be looking for.

Any Lipo 6 Black Intense Side Effects?

There’s a real possibility of side effects with Lipo-6 Black Intense for a couple of reasons.

Firstly caffeine is here in two forms and paired with theacrine. If you’re sensitive to stimulants then you can expect problems like headaches, nausea, jitters, insomnia and racing heart.

Then there’s the synephrine, which can not only cause much of the above, but also in some cases raise blood pressure dangerously high. This means an increased risk of serious health issues like stroke and heart attack.

Any amount of Yohimbe up to about 5mg can have complications like causing anxiety, hypertension and stomach complaints.

The problems with caffeine and yohimbe could possibly be ruled out if we could be sure of the dose. This is an examply of how irritating and dangerous proprietary blends are. Be sure to avoid them as a rule if you can.

Customers can find Lipo-6 Black Intense from the Nutrex website for $64. It’s not currently available in the U.K.

As we mentioned earlier, it’s disappointing not to see fat burning staples like green tea and cayenne pepper. That really hurts over all effectiveness.

On the appetite control front too, we’re not completely convinced about yohimbe so it would be nice to see a fiberous ingredient that would expand in your stomach and keep you full.

From a stimulant point of view Lipo-6 Black Intense is just that, intense. But just because someone’s got their foot down on the accelarator, it doesn’t mean they’re going in the right direction.

There’s too much missing from this product to be a top burner and serious questions about the formula mean your being asked a lot of money for potentially a lot of problems.