It’s normal for fat burners to boast about their strength, but with Lipo-6 Black Ultra Concentrate, you’d think the team at Nutrex were pitching a new roller coaster.  It’s almost like they’re challenging your bravery.

‘Extreme caution’ is advised when taking this ‘fat destroyer’ and we’re told we only need one capsule … for our own safety. 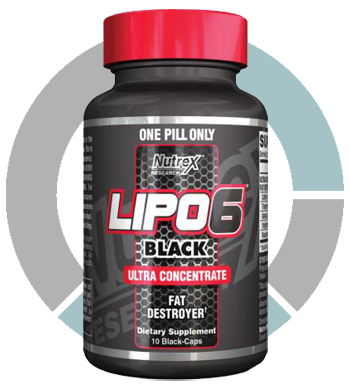 Apart from this clear attempt to super double dare you into buying, Lipo-6 Black’s promises are pretty standard: fat burning and metabolism boosting.

We’re always willing to forgive some overexcited marketing if the brand can get the job done where it counts, so let’s have a closer look and see how Lipo-6 Black really is, as they claim, ‘Serious about results.’

How Does Lipo-6 Black Work?

The first thing to note here is there are differences between the U.K & U.S formulae.  This sometimes happens thanks to the individual regulations each country has in place.  It’s also worth pointing out that while the British version shows every ingredient on the label, in the States we are only given a dreaded proprietary blend.

We’ll do our best to rate both, starting in the U.K and making the most of the added info. First … the scores

There might be differences in formula, but both U.S and U.K versions are ultimately a disappointment. A decent stimulant profile is let down by the lack of appetite regulation and hardly any thermogenic ingredients at all.

The Synephrine is a worry here and yohimbe in proprietary blend always makes us uneasy. No matter how they try to dress it up the serving schedule is lacking also.

Under 30 dollars or pounds is very reasonable for a burner and if you only want your metabolism stepped up it might be an option. For those looking for a more complete weight loss job however, they should save their money for something with all the bases covered.

No testimonial section on the Nutrex website so customer feedback is our only way to find out how well Lipo-6 Black has been received.  User reviews on retail sites are always patchy because they vary in detail, honesty and insight.  Lipo-6Black gets generally positive reports but most are hardly blown away like the P.R suggests.

Despite the company being based in the U.S it’s unclear exactly where Lipo-6 is manufactured. Being available on both sides of the Atlantic means it’s most likely legit, but this shouldn’t be left to guess work.

Exaggerating the strength of this brand also seems dishonest and may lead people to let their guard down with other products on the net where they should be careful.

Nutrex Research has been in business since 2002.  They are based in Florida and offer a range of options besides this fat burner.  Most famously Anabol-5, the pre-workout Hemo Rage, the stimulant-free pre-workout N-Vein and the testosterone booster T-Up.

They’re products are promoted by a number of athletes and bodybuilders, but they’re not as established as many of the bigger players.

Lipo-6 Black recommends that you take one capsule in the morning and one at lunch time. You are warned never to exceed one capsule per serving and two servings a day (it’s so strong, remember?) Well let’s just say we’re not convinced. You may well have to careful taking this product but only due to the possible side effects below. One capsule is fine provided they are split into 3 or 4 evenly spaced servings. Front loading two servings in the 1st half of the day means fat burning effects will taper off later on.

Any Lipo-6 Black Side Effects?

In the past Synephrine has been shown to cause headaches, sickness and especially when combined with caffeine, raise blood pressure in some to unsafe levels, increasing the risk of heart attack and stroke. It’s a risk we prefer our burners to avoid.

Too much yohimbe can also cause heart palpitations, dizziness and nausea.  There’s no way of telling if the amount in Lipo-6 Black could trigger this.

Caffeine is really a must for fat burners.  This natural stimulant not only speeds up the metabolism to burn off calories faster, the energy it offers stops you from suffering the stamina crashes that come with a reduced calorie intake.  Problems only start with caffeine when there’s too much but 200mg is not a worry.

An amino acid which helps chemicals in the brain such as dopamine and noradrenaline, improving both focus and mood.  While it cannot raise these useful chemicals it can stop them being drained by exercise, keeping you performing at your peak for longer.  110mg is a solid amount.

Another name for Guarana, a version of caffeine which is supposedly slow release and cuts out the possibility of energy crashes.  However studies have shown it barely differs from caffeine at all.  Helps the stimulant profile but at extra 100mg the kick is getting a little high for some.

Sometimes called Synephrine or bitter orange extract, there is clinical evidence this can raise metabolism and boost energy, but not without a risk.  Especially when combined with caffeine this ingredient can cause unpleasant and sometimes serious side effects.  See below for more detail.

Capsaicin is a great ingredient for a fat burner because it is an effective way of naturally heating up your body up to melt far more calories and then a load again as your system has to cool back down.  This is called thermogenesis and would be great if there wasn’t a pitiful 5mg included.  Pointless.

Essentially black pepper to help the body absorb other ingredients.

Caffeine and Synephrine appear in the 294.5 mg Lipo-6 Black’s 294.5mg Ultra Concentrated Fat Destroying Complex, the rest is substituted  for:

This is a relative of caffeine which works on stimulating the heart rather than the brain.  In theory this could really help with weight loss but current evidence is not strong and we don’t know how much is in Lipo-6 anyway.

Yohimbe can be an effective natural weight loss because it blocks the alpha receptors in the brain which prevent maximum fat burning.  At too high a dose however it can cause side effects.  Unfortunately we don’t know the amount here.  Risky.

Works pretty much the same as yohimbe, supposedly at a lower dose and without the possible side effects.  Not knowing the volume however, it’s difficult to say whether this is of use here.

Both versions contain no appetite suppressants and only the UK version includes a tiny amount of thermogenic ingredients. These two things are essential for a well-rounded burner.

Lipo-6 Black is certainly cheap and contains enough stimulants to have some effect, but there are far more efficient, safer and better balanced burners out there for sure.