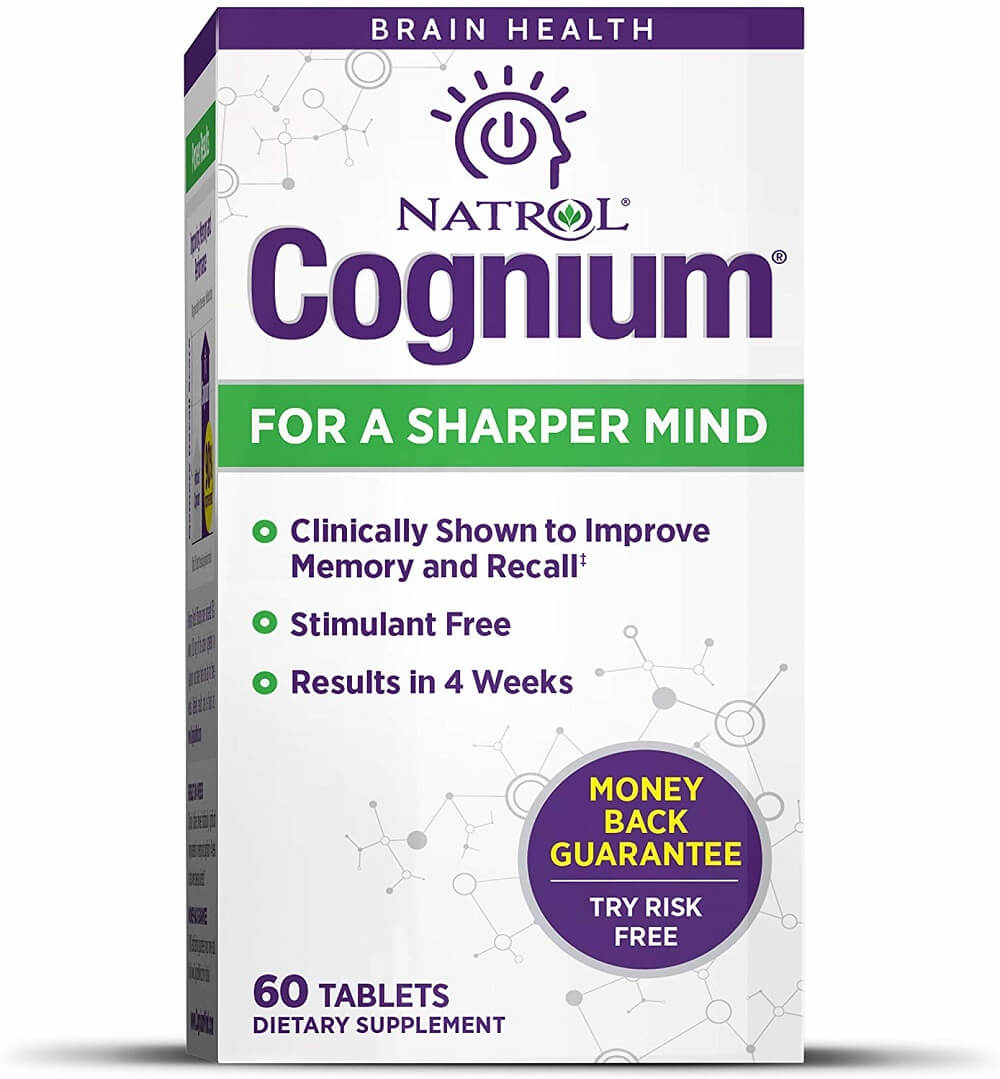 Natrol Cognium is a nootropic formula created to maximize your cognitive powers. It only uses one ingredient and claims to help you with:

The company says that Cognium is clinically proven to work. We’ll see if that’s the case in a minute, but we were surprised to see Natrol Cognium using CERA-Q powder as its only ingredient.

Typically, the best nootropic formulas use a combination of ingredients to boost different areas of your brain health.

So, is CERA-Q alone enough?

To answer this question, we’ll have to take a deeper look at the formula, side effects, and benefits in this Natrol Cognium review.

Over the years, we’ve reviewed quite a lot of nootropics. And Natrol Cognium has to be one of the worse ones of the bunch.

Unfortunately, it only uses one ingredient that has a lot of controversy behind it. Some minor evidence points to memory-boosting properties. But that’s far from enough for us to recommend this ingredient to our readers.

All in all, it’s not a great display from one of the bigger supplement brands on the market.

Natrol is a well-known supplement company based in Los Angeles, USA. They’ve been around for a long time; since 1980 to be precise. Today they have more than 200 products that they sell all over the world. Cognium is their flagship nootropic, and here in this Natrol Cognium Review, we’ll see if it holds up to scrutiny!

How Does Cognium Work?

If you ever experimented with nootropics, then you know that each one works in a different way.

Nootropics like Mind Lab Pro and Onnit Alpha Brain, on the other hand, combine a multitude of ingredients to promote your long-range brain health.

But how does Natrol Cognium work?

Well, this nootropic has one active ingredient which is thought to help with glucose transportation to your brain tissue. It also claims to boost antioxidant activity in the brain, which can help protect your neurons from harm.

Of course, every supplement will claim various things. It’s up to us to check the science behind the ingredient formula to see whether it really works or not.

Natrol Cognium claims to help you with:

It also supposedly boosts your general cognitive function. Along with protecting your brain cells from oxidative stress.

But just how true are these notions? We look into that below.

The most important part of any supplement is the ingredient profile.

As long as the ingredients are safe and effective, you can look past minor details.

So what does Natrol Cognium contain? Here’s what it shows on the bottle: 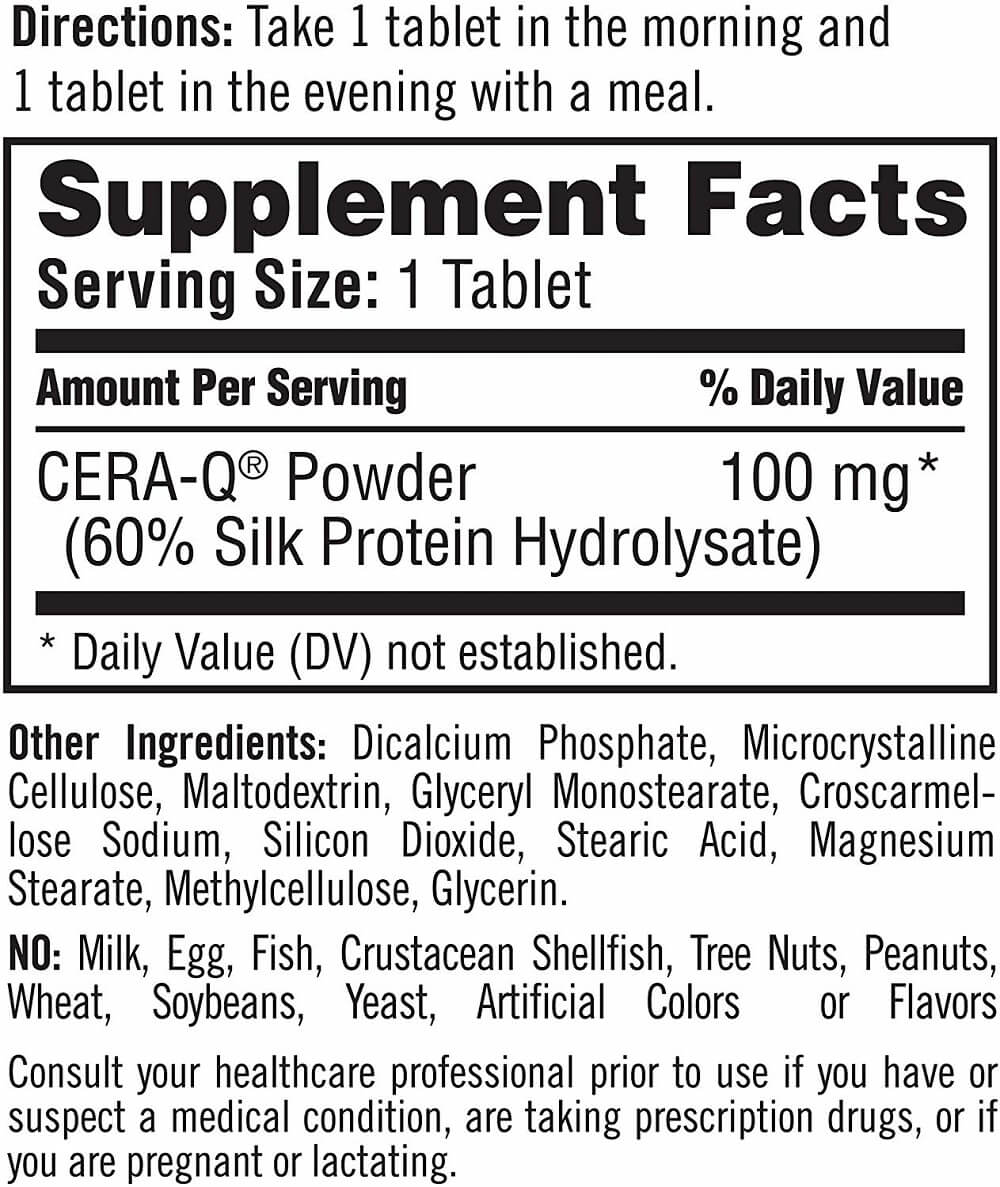 As you can see, it has only one ingredient: CERA-Q. No herbs, vitamins, or any other compounds that we see in many of the top brain supplements.

What is CERA Q Powder?

The CERA-Q powder in Natrol Cognium is 60% silk protein hydrolysate by weight.

This ingredient is not a stimulant, which is good. This might reduce the chance of side effects – especially in sensitive users.

What Does CERA Q Do?

So, what is silkworm cocoon protein doing in a brain-boosting supplement?

Well, Natrol states that this ingredient has some impressive cognitive benefits. These include:

CERA-Q is speculated to boost your brain blood flow. This includes an increase in oxygen and nutrient delivery to your brain.

Additionally, Natrol claims that CERA-Q increases glucose uptake in the brain, and acts as an antioxidant.

In other words it should help you with stress and protect from brain cell damage due to age and other factors.

What Does the Science Say?

If the claims from the above were true, then you’d be looking at one of the most powerful nootropics available right now.

We don’t think these claims are true though.

Natrol relies on a couple of Korean papers to back up these claims. Most of these studies aren’t available on PubMed, which is disappointing. PubMed is like Google for science.

Worse still, most of the studies that Natrol Cognium relies on were done ‘in vitro.’ Or in test tubes. These results can be completely different than what you’d see in a human.

That said, we found one human study showing some memory benefits of CERA-Q. But this alone is not enough to justify all the hype behind this ingredient. (2)

Now, here’s the biggest problem with CERA-Q studies. If you look it up online, a Natrol-endorsed PubMed study of CERA-Q’s benefits was actually retracted due to data falsification and author misbehavior. (1)

In other words, the study made up the results in order to promote this ingredient. The same study which was endorsed on Natrol’s official website. This is quite disappointing if you ask us.

As a result of these shameful findings, we don’t recommend CERA-Q as one of our favorite ingredients in a nootropic supplement.

Even if CERA-Q worked, it’s not enough on its own.

Typically, with high-quality nootropics, you’ll find that they use a combination of proven ingredients to promote all aspects of mood and cognitive performance.

Some of the key nootropics missing from Natrol Cognium include:

With Natrol Cognium, you take 1 tablet two times daily with meals. Ideally you want to take one tablet in the morning and another in the evening.

Just make sure not to exceed the recommended dose on the label.

As CERA-Q is an understudied ingredient, very little can be said about its safety.

It’s true that you should always talk with your GP before taking a supplement like this one.

Most of the studies that Natrol provides were done by the same people who made up false results in one of their papers, which was ultimately retracted.

As a result, we have no reliable evidence on whether CERA-Q really works, and how safe it is.

Natrol Cognium online reviews are surprisingly positive. At least on Amazon, that is. The product boasts an average score of 3.8 out of 5 stars there.

The majority of the users claim they ‘felt’ something from using this product. But there are also those that claim how Natrol Cognium didn’t work for them, even after using it for weeks.

One bottle (30 servings) of Natrol Cognium will cost you around $17 if buying on Amazon. This kind of price range is perfect for people that are on a tighter budget. Still, we don’t believe it’s a good value for money, find out why below.

Any money is wasted money if the product doesn’t work. Natrol Cognium might work, but there’s a big gap between the science and purported benefits of CERA-Q. There might be some cognitive benefits from taking Natrol Cognium. But until more reliable evidence comes out, we can’t recommend it.

That said, the price is attractive indeed, and some people might want to give it a go despite all the controversy. So if you do want to try Natrol Cognium, you can buy it on the official website, Amazon, or a retail store that sells Natrol products.

Many people wonder which one is better: Natrol Cognium vs Focus Factor.

When you compare their ingredient formulas, Focus Factor comes out as the clear winner. It has more proven ingredients, better ratings online, and most importantly, it works.

The same can’t be said for Natrol Cognium which lacks reputable evidence to confirm its supposed benefits.

However, if you’re looking for the most effective nootropic available, we wouldn’t recommend either of these two products.

You can check our Mind Lab Pro Review or Onnit Alpha Brain Review to see what we think about these nootropics. Right now, these two are the best that the market offers.

Natrol Cognium vs Prevagen – which one is best?

You’d be forgiven for not knowing that these two nootropics actually have quite a few things in common. For one, both are highly popular due to their great marketing. Secondly, both Prevagen and Natrol Cognium have only one ingredient in their formulas.

While Natrol Cognium has the already mentioned Cera-Q. Prevagen has Apoaequorin, a type of protein extracted from glowing jellyfish.

Neither of these two products look convincing. They both claim to boost your cognitive function and protect from memory decline, but the evidence says otherwise.

It’s suspected that some of the studies behind Natrol Cognium and Prevagen were funded by their respective companies, which destroys their credibility.

As a result, we don’t recommend Natrol Cognium nor Prevagen as our favorite nootropics.

You Asked, We Answered

Natrol Cognium is not an FDA approved supplement. Nor is almost any supplement for that matter. With that said, Cognium is produced in cGMP facilities that adhere to high manufacturing standards.

How Effective is Cognium?

Cognium doesn’t appear very effective. At least if we’re going by the available studies. One study was even found to be falsified – as a result, it was retracted from PubMed.

How to Use Cognium Tablets?

The best way to take Cognium tablets is one in the morning and another in the evening with your meals. Make sure not to exceed the recommended 2 Cognium tablets per day.

Natrol Cognium might have great marketing behind it, but it’s one of the more disappointing nootropics we’ve reviewed here on Cates Nutrition.

With only one ingredient in the formula, there’s only so much you can expect from it.

At best, it might slightly help with your memory. At worst (and more probably), it’s a complete waste of money.

Even though it’s quite cheap, there’s no reason to pay for a nootropic that has no reputable evidence showing that it works.

If you’re looking for serious results, we suggest to steer clear of this one and look for a nootropic that uses multiple ingredients instead.