The Bodybuilding.com top ten is always a good indicator of which fat burners have a buzz around them and are worth a closer look for our reviewers.

Hence today we’ll be at looking at a chart favourite from the supplement company BPI, Nite Burn.

As the name suggests this product aims to do its work while you sleep, promoting weight loss, appetite management and relaxation. 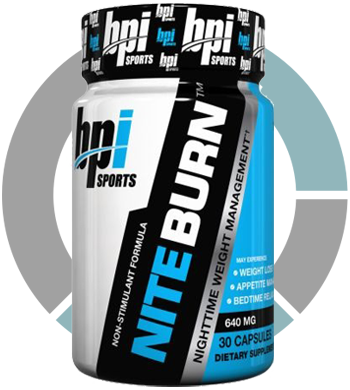 Normally a safe level of natural stimulant is the corner stone of any good burner, but obviously given Nite Burn’s approach, it has to stay clear of anything like that.

We’ll be particularly curious to see if you can indeed lose fat without losing sleep. Let’s find out.

How Does Nite Burn Work?

Irritatingly Nite Burn hides the majority of its ingredients within a relatively small 640mg proprietary blend, so we’ll have no idea how that volume is divided up between components good, bad or indifferent.

This really annoys us because it’s utterly unnecessary and breaks down trust between customer and company. That said, we can still get a reasonable overall sense of the supplement’s worth with some careful analysis.

Although the vitamin D3 gets Nite Burn off to a great start after that there’s a real problem with the proprietary blends and serving schedule. 8 ingredients of varying quality are all sharing just 650mg. Even if the better choices dominate, fat burning won’t be sustained very long by just one capsule with no stimulants to speed metabolism and limited thermogenic potential.

It’s quantity and not quality which causes the markdown here, the sums just don’t add up.

$20 is towards the cheaper end of the burner price scale, but that has to be balanced against some of the problems we’ve identified. There are definitely better options out there for a similar cost.

Reviews are limited to customer feedback on the sites where it’s available to buy. This is always disappointing as you’re never going to get the insight you would from a dedicated testimonial section on the company website. Although reviews are generally favourable, they’re not stellar and some have clearly been left disappointed.

Nite-Burn is all natural so we’ve no concerns about its safety but refusing to disclose all the information about your formula and championing debunked ingredients life raspberry ketones was never going to get full marks from us.

BPI Sports is a highly successful supplement company operating out of Florida. Starting with just 2 employees they have expanded an now have an extensive range of products, to their name, athletes prepared to carry the banner and a number of sister companies including Brain Pharma, Pro Nutra, EXT Sports, IMAGE Sports.

It’s difficult to fault the professionalism of their set up, just a shame about the fondness for proprietary blends.

Nite Burn simply requires you take one serving of one capsule directly before bed. Convenient certainly, but effective? Hardly. The best fat burners require 3 or 4 servings to keep the active ingredients working. Obviously this isn’t possible while you’re sleeping, but 1 capsule just isn’t strong enough to burn fat for as long as the best daytime equivalents. Unless you’re prone to sleep-jogging, don’t expect too much weight loss.

Any Nite Burn Side Effects?

There’s nothing here that should worry you as far as side effects, which is one plus at least.

Nite Burn is available from Bodybuilding.com for just over $20, which buys you a month’s supply.

Vitamin D3
Studies linking vitamin D3 to fat loss are on the increase. One 2012 trial found it was particularly effective in burning abdominal fat and that was while supplemented at a much lower level than the 1200IUs on offer here. So a strong start, it’s just a shame D3 is the only ingredient given a volume.

Raspberry Ketones
A total waste. Caused a real stir in the fat burning world for a short time after being featured on Dr Oz’s show as the next big thing, but in reality has only managed results in lab rats at absolutely huge doses. If these amounts were to be scaled up for humans we would need multiple grams, far more than 640mg.

White Kidney Bean
Maybe not accurate to call this a fat burner, but there’s a case to made for it being calorie blocker. Studies in the past have shown that when carbohydrates and white kidney bean are consumed at the same time it alters the way starches are broken down, reducing levels of carb absorption. As a result it may copy the effects a low calorie diet, but compelling evidence from clinical trials is pretty thin on the ground.

Green Coffee Bean
Green coffee bean, there in a strong enough amount, can be a strong addition to any fat burner. The chlorogenic acid in this ingredient breaks down glucose in the liver before it can be used as energy and starved of a source, the body starts chucking those pesky hard to shift fat stores in the furnace.

Dandelion
One or two small studies have shown that dandelion has a diuretic effect, causing users to urinate more frequently and possibly helping to shift water weight in the short term, but it has no metabolism boosting or thermogenic effects so is a pretty weak inclusion.

L-Tryptophan
This essential amino acid found in animal and plant proteins is first converted to 5-hyrdoxytryptophan in our brains the eventually to serotonin. Serotonin is a feel good chemical which promotes improved mood.

Saffron
A study in 2010 found that saffron extract under the brand name Satiereal had some mild effect as an appetite suppressant, working in the same way as high fibre and making us feel fuller for longer.

Melatonin
Melatonin is the hormone released in the brain to induce relaxation and sleep, so obviously supplementing it will have these effects. While we’re not suggesting Nite Burn’s dose is dangerous, it does make us slightly uneasy that we don’t know exactly the amount of this powerful chemical we’re dealing with.

Lemon Balm
One or two studies have shown that lemon balm or some variation of it has the effect of reducing anxiety but the research could definitely be stronger.

However understandable Nite-Burn’s lack of stimulants may be, the fact remains nearly all burners we review really struggle without them and this is no different. What’s less understandable is the lack of info on dosage and some highly questionable ingredients.

Nite-Burn is a nice idea, but one unlikely to deliver much in the way of results.