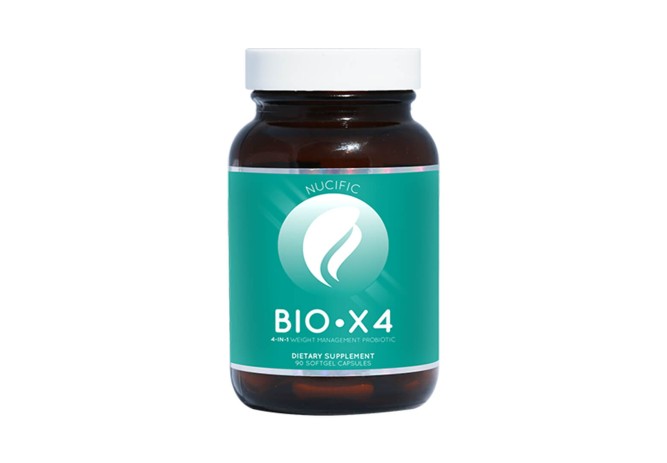 If you suffer from digestive issues or immune problems, a good probiotic can help.

And while we do recommend taking a prebiotic instead of probiotic, a supplement like Nucific Bio X4 certainly looks promising.

The first impressions in this Nucific Bio X4 review are positive.

Nucific Bio X4 seems to be more than a simple probiotic; it also has digestive enzymes and natural fat burners. Which is why the producers say that this product will make you “look and feel great.” This certainly explains why it’s such a popular supplement online.

Now, not everything about Nucific Bio X4 is great. We noticed a few downsides too.

We’ll get to that below. To get a full picture of this supplement, we’ll inspect all the ingredients, their benefits, dosage instructions, and side effects in this Nucific Bio X4 review. So you’ll have your answer to the question “Does Nucific Bio X4 really work?”.

Want to know what’s good and what’s bad about Nucific Bio X4? This short and easy section tells you just that, and helps you decide whether this product is right for you. Be sure to post in the comments below if you have any questions.

Nucific is a U.S. based company that produces supplements aimed at complementing your diet and lifestyle.

They have a number of professionals in their team, including doctors and qualified nutritionists.

It’s certainly refreshing to see a supplement company with staff that has all the right qualifications to endorse their products.

Still, the ingredient formula is king. This is what will tell us whether their flagship probiotic, Bio X4 really works.

So, one question readers of this Nucific Bio X4 review might ask; what specific benefits will this supplement give me?

According to the marketing material on their website, Nucific Bio X4 will help you with:

The producers of Nucific Bio X4 also claim that it will help you look and feel great.

This is great to hear, but can this digestive health supplement really deliver? Let’s dig further…

It includes all sorts of ingredients, from digestive enzymes to appetite suppressants. Along with the probiotic bacteria blend of course.

Now, this is a great approach to supporting fat loss, overall digestion and gut health. (1, 2, 3)

Could it be improved?

Yes – one of the probiotic bacteria included can cause problems for people with a weakened immune system.

Bio X4 also doesn’t have prebiotics, which are essential to feed your native gut bacteria. 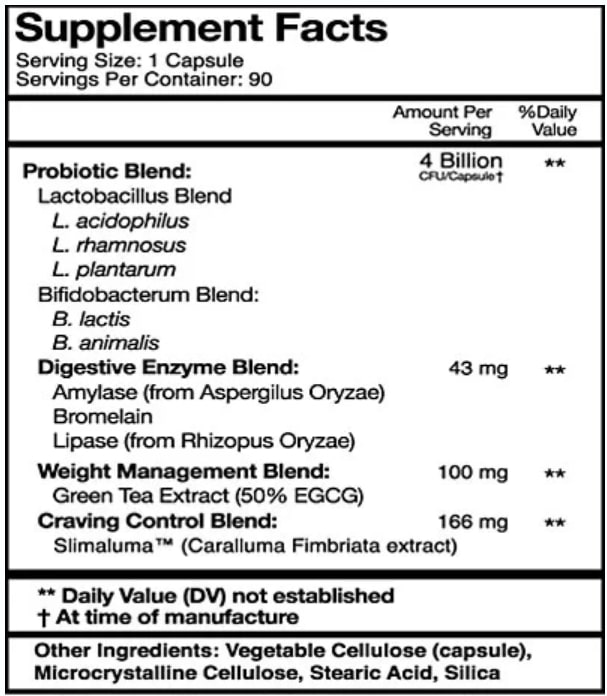 The Lactobacillus blend in Nucific Bio X4 contains some particularly important species of bacteria. These include:

All of the lactobacillus (the L prefix) bacteria are essential for not just your gut health but also general health as well.

L. rhamnosus can help fight off the bad guys in the gut (harmful bacteria, candida, etc.) and is even used to treat bacterial infections in some cases. That said, L.rhamnosus is a transient bacteria. This means it doesn’t live in your intestines but rather passes through them.

The problem with L.rhamnosus is that it might cause issues if you have a weaker immune system. Just something to keep in mind.

Then we have L.acidophilus, which is one of the most common bacteria in probiotic supplements. It lives in your large intestine where it produces lactic acid. It’s thought to play a role in the immune system and helping to prevent diarrhea.

May support the immune system, helps against constipation and contributes to healthy gut microflora.

B lactis is found in both the small and long intestines. It’s a powerful bacteria, but it’s transient and doesn’t live in your body.

Studies show that B lactis can help with digestion, lactose intolerance, constipation, and immunity.

Almost any good probiotic you come across will often contain this bacteria.

As for B. animalis, it’s a standard inclusion in probiotics too. It can be of particular help if you suffer from IBS and diarrhea. B. animalis also plays a role in restoring your gut flora.

Breaks down proteins, carbs, and fats, and helps you better absorb nutrients from foods.

To say these enzymes are important for digestion would be an understatement. Without them, you’d have a very, very hard time digesting foods!

Bromelain is an interesting one because it’s not native to your digestive system. Rather, it’s found in foods such as pineapples. Bromelain breaks down the protein you eat from food, and helps to reduce inflammation in the body. Because of this, it’s used for both digestion and reducing sinus inflammation.

Onto amylase now! This digestive enzyme, unlike bromelain, is actually produced by your body. It’s found in both your salive and fluids released by your pancreas. If you ever ate bread and the more you chewed, the better it seemed to taste, this was thanks to amylase. Amylase breaks down carbs and helps your body turn them into energy.

Lipase, on the other hand, is tasked with breaking down fats. Specifically, it reduces them to fatty acids and triglycerol. What’s more, your body makes different types of lipase, all of which have their unique functions. Lipase is also used to make cheese and yogurt, and it’s a quite common ingredient in digestive & probiotic supplements like Nucific Bio X4.

This weight management blend isn’t really a blend since it only has one ingredient – green tea extract.

It’s a fantastic ingredient in any case. Helping with fat loss along with providing antioxidants that protect your body from cellular damage.

It contains 50% EGCG, which is a compound touted to have amazing health benefits. This includes a reduction in inflammation and faster weight loss. All in all, green tea is a fantastic ingredient to see in Nucific Bio X4.

This blend also has only one ingredient. In this case, it’s Slimaluma. This is a branded extract of Caralluma Fimbriata.

The name might sound confusing, but it’s simply an edible cactus that grows in India. People in India commonly eat it because it’s thought to help suppress appetite.

This was very useful in the past when people still hunted for fun.

That said, it’s all mostly anecdotal evidence with this ingredient. There haven’t been a lot of studies published on it. Which is why it’s not one of our favorite ingredients in a supplement like this. (4)

We don’t think much is missing from a Nucific Bio X4.

That said, if we wanted to make it better, we’d certainly include some natural prebiotics.

How to Take (Dosage Instructions)

The dosage directions of Nucific Bio X4 suggest taking 1 capsule with each of your meals. You can take up to 2 capsules per meal, but don’t take more than 6 per day. We suggest starting with just 1 capsule per day to asses how you react to this product – then adjust the dose from there.

Side note: With probiotics such as Bio X4, dosages aren’t that important. The reason being, most probiotic supplements will contain billions of bacteria, which is shown as CFU count on the label. Bacteria grow and multiply quickly so while a difference of a few billion per supplement might seem huge, it actually makes little to no difference. Similar story with enzymes, although with these the dosage is a bit more important.

Side Effects – Is Nucific Bio X4 Legit and Safe?

Probiotics like Nucific Bio X4 are generally safe and don’t come with any side effects.

If you do experience any side effects, they’re usually mild and last a short while. The most common side effects you can get from a probiotic like Nucific Bio X4 include:

This typically happens when you introduce new friendly bacteria to the gut, as they rebalance the microbiome. Again, it’s short-lived and mild in most cases.

What’s most ironic about these side effects is that they also occur when you have problems with your gut health!

The only possible concern with Nucific Bio X4 is if you have a medical condition.

Specifically, a severely weakened immune system is susceptible to the bacteria L. rhamnosus. It may lead to endocarditis. This is a condition where the heart’s inner wall gets inflammed as a result of bacterial infections.

Luckily, these cases are extremely rare. Unless you have an immune system that’s completely shot, there shouldn’t be any problems!

Now, price is the biggest issue with Nucific Bio X4.

Get ready for this… if you want to buy Nucific Bio X4, one bottle will cost you $100 without any discounts!

This is an extremely overrated price, even for a product like Bio X4.

It’s honestly a disappointing value for money. Not because it’s a bad product, but because hardly anything could warrant such a high price tag!

So that brings us to the end of this Nucific Bio X4 review.

If you’ve read carefully, you know that this is a great all-around supplement for gut health, digestion, and even fat loss.

With that said, we aren’t the biggest fans of probiotics. We more prefer prebiotics because they’re more stable and feed your existing friendly bacteria. And often lead to more pronounced health benefits.

For most people though, Nucific Bio X4 is safe and shouldn’t cause any side effects. If you do have a weakened immune system, then talk to your doctor before taking Nucific Bio X4.

The only problem we have with this supplement is its price. Charging $100 for a probiotic is really too much. There’s nothing in Nucific Bio X4 that would justify such a price. It’s a simple blend of bacteria, digestive enzymes, cactus (yes, edible cactus is included too!), and a bit green tea.

If the price isn’t a problem for you, then by all means. But otherwise, we do think there are better choices out there for a fraction of the cost.