In the last couple of weeks, we’ve had 3 emails all asking the same thing. There seems to bit of confusion about the fat burner PhenQ.

We decided to go check it out and to be honest, we’re not surprised.

The prefix ‘Phen’. The use of the letter Q (surely the most science-y of the whole alphabet). The clinical colors used on the website. All of this has understandably led some to think PhenQ is connected to the weight loss drug, phentermine. 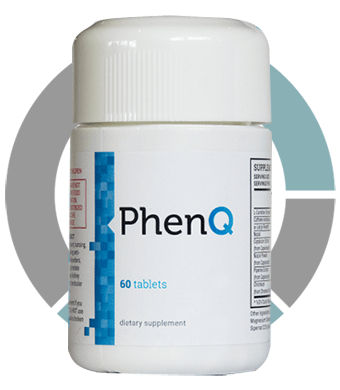 Let’s clear that up right now, it’s not. (Even though they’d probably like you to think it is.)

But rather than just reply to those users who asked individually telling them what it’s not, we thought we’d right a review and tell you all what it is.

For a start it’s natural, which phentermine is not. That’s a huge plus in our book right? Well not necessarily. Natural and effective is the only kind of natural we’re interested in.

To its credit, it doesn’t use proprietary blends. We’ve got every ingredient and it’s dose right there on the label. First box ticked.

The ingredient profile doesn’t look that strong just based on the names which are there and the ones that aren’t. Once you bring dosages into it though, it’s not much better.

Capsaicin is a great choice for any fat burner, but unbelievably PhenQ includes only 8mg! Calcium may have some weight loss potential but the research isn’t strong enough to justify 650mg, while 150mg of caffeine is okay but could stand to be much higher.

Similarly L-carnitine can help energy, but only in doses far greater than even 143mg. Nopal could be useful in staving those cravings but more research is needed.

Did you ever watch ‘The Price Is Right’ and see those contestants who priced a like a toothbrush at $90?

One of those guys clearly went on to find work costing PhenQ. Okay it’s not in triple digits like some supplements are but it’s confident it can sit amongst some of the best burners available.

Because PhenQ is only available from the official website, there are no retail site reviews to go on. That’s not a bad thing, we don’t have a lot of faith in those faceless lines of feedback anyway. However it does mean that

a) a product has to have its own testimonial section and
b) its really got to shine.

PhenQ manages the first part of that – there are testimonials – but falls short on the second. We only get a first name and initial, before and after pictures and a short paragraph. You look for full names, accurate photos, starting weights and videos, so these aren’t the most helpful.

Trust wise we do have some issues with PhenQ. Okay so overall it should be safe and it doesn’t use proprietary blends. But presenting itself as the most effective fat burner you can get with these ingredients is not on. Worse, actively trying to piggyback on the reputation of a synthetic weight loss drug. It even uses the phrase ‘pharmaceutical strength.’

Not only is that dishonest, it shows obviously don’t know their market terribly well. Most natural supplement users are that because they want to avoid the drug route.

PhenQ looks to be pretty safe as it’s manufactured in both the U.S and U.K so must comply with strict GMP standards. They also offer free shipping and a money back guarantee, along with a phone number and online feedback form to contact them. Plus we haven’t come across any major complaints against the company.

There are a few touches that we don’t like however. The clinical presentation is misleading, there’s a countdown to the end of a ‘flash sale’ which just seems to reset when it’s done and there’s not a lot of company info. None of these things are crimes, but we’d be more comfortable if they were sorted.

« Click for the top fatburners »
~ Our Top Fat Burners ~

Just 2 servings, front loaded at the start of the day, means this supplement may (and that’s a pretty big may) give you a flying start with your fat burning, but is going to be clocking off around late afternoon.

Think about it. If your first serving only sustains you from breakfast to lunch, how’s your second going to get you all the way to breakfast the next day?

That’s why we recommend supplements that use 4 servings per day. That’s the perfect relay team to keep active ingredients topped up for as long as you need them.

Any PhenQ Side Effects?

This is one section where no news really is good news. Based on the ingredients here it’s very unlikely you’ll feel any negative effects. Unless you have any individual allergies or are extremely sensitive to caffeine.

A few proven fat burning stables are missing here. As you can see from the price above, PhenQ isn’t shy about asking for the greens from your pocket, but they don’t offer the greens you need.

Green coffee bean and green tea are two of the strongest natural fat burners around. Any burner which doesn’t have them is putting itself at a serious disadvantage.

PhenQ may have the clinical look down, but that’s all it is, a look. It doesn’t have anything like clinical effectiveness. This supplement isn’t so much a wolf in sheep’s clothing as a stripper in doctor’s clothing. Not even a very good stripper.

You can do much better with other burners that are much the same price, so what are you waiting for?