Natural fat are a great way to help you safely lose weight faster.  But there’s plenty of brands looking for your business and picking the right one can be confusing.

So you can see then a name like Physique Of Greatnesss might stick out for all the right reasons.

And why many are drawn to the company’s new burner, POG Cuts FTS. 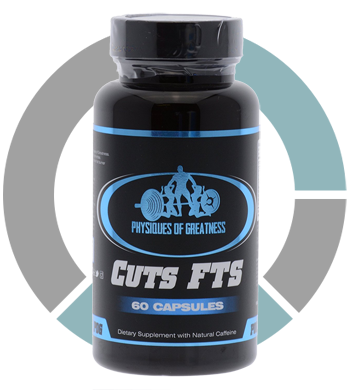 There’s nothing madly original about the goals Cuts FTS sets out – burn fat, raise energy and control appetite – but who cares?

All the burner boxes are ticked.  On paper at least.  Because Physique Of Greatness might stick out from the marketing crowd, but what about those vital results

A real bonus is Cuts FTS doesn’t use any proprietary blends, meaning all the ingredients and their doses are plain for all to see.

Great start.  So is this a BOG (Burner of Greatness) or a DOG laying a LOG (no explanation required).

The formula here is a little patchy. The green tea is solid and the caffeine is strong enough to have an effect but after that we’re less sure.  White willow has it’s uses but there are probably more direct choices for a burner and L-Theanine is only there to take the edge of the stimulants. We would rate 7-Keto as anything more thn promising and we wouldn’t rate Higenamine at all. Yohimbe can be really useful, but there’s the chance of side effects

Just over $30 is by no means steep for a burner, it’s towards the lower end of the market in fact. But there’s a big difference between being cheap and being value for money. POG FTS doesn’t exactly blow us away, so we advise holding on to your cash until you find a product that does. You won’t struggle to find better for not much more expensive

Annoyingly we couldn’t find a proper detailed testimonal section on the offical site, which we always look for. The customer feedback on retail sites is mostly positive however, the problem is there’s just not that many of them. It has 4.5 stars on Amazon (where it no longer seems to be available weirdly) but this based on just 5 reviews. It’s nowhere near enough to get a consistent sense of quality. Always look for boosters with dedicated testimonals, names, stats, before and after pics or vids.

While there’s nothing terribly dangerous about POG Cuts FTS and the deserve credited for full formula disclosure on the label, that doesn’t mean the get a pass on trust. There are a few ingredients here which resrarch tells us is nowhere near as effective as this supplement makes out. Add to that the possibility of some pretty unpleasant side effects (more on that below) and you can see where it needs to improve.

Physique Of Greatness started life as the You Tube channel of fitness enthusiast Chris Jones. As these channels often do when they get enough of a following, POG morphed in to a range of supplements and merchendise. Sold mainly on Tiger Fitness, there are a modest range of supplements aimed mostly at helping you pacl on muscle. Though they are not as established as some other companies, we couldn’t dig up any real problems. It’s worth remembering though that with online celebs there’s often a bit of personality worship which can cloud actual quality.

Users should take 2 capsules a day to see the full effects according to POG.

We’re not so sure about that. The best burners tend to suggest you take 4 caps spread out evenly through your day to keep those fat cutting ingredients pumping consistently

Just 2 means there’s every chance you’ll see a drop off later or in the day or earlier depending on when you decide to take your servings. 2 can’t sustain max results for 24hrs.

Any POG Cuts FTS Side Effects?

There’s a healthy amount of caffeine in POG Cuts FTS, meaning if your sensitive to it you could be in line for racing heart, headaches, jitters, nausea, insomnia, all the usual suspects of too much coffee.

Yohimbe too can cause side effects in some at levels of 5mg and below as it is here. What to look out for there is anxiety, hyper tension and stomach problems.

Customers can find POG Cuts FTS on I’ll Pump You Up.com where it retails at $31.95 for a one month supply. The website ships worldwide, to the UK etc, but shipping charges will obviously increase the price,

There’s a couple of things missing here we’d like to see. Green tea is great for thermogenisis, but thacould’ve been strenghened by including something with with plenty of capsicain like Cayenne Pepper.

Also, the appetite control could be a lot stronger. POG Cuts FTS is relying on Yohimbe to curb hunger, which some studies show it can do to be fair. However for better results which avoid possible side effects, you can go for a fiberous ingredient, that expands in the stomach keeping you fuller gor longer.

You know I’ve got through this whole review and only just realised I have no idea what FTS stands for? Can’t find out anywhere. Anyway, reviewing POG Cuts FTS made me think of a few other letters.

A few ingredients were like WTF? And the poor serving schedule is a S.O.B, but at least green tea and caffeine mean this supplement won’t do S.F.A. Definitely better choices out there though.