Prime Nutrition Fat Burner is one of those newcomers to the supplement world which seems to have really split opinion. Despite this it is growing in popularity, possibly down its no nonsense name and claims.

Thermogenic effects, appetite suppression and a faster metabolism are all supposedly on offer here, so let’s embrace that straightforward approach and see if what side of the great Fat Burner internet debate we come down on. 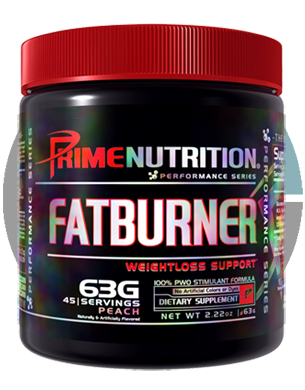 Has it the skills to pay the bills? Are there the grounds to shift the pounds?

We look at these choices in detail further on in this review, but first the overall scores…

Incredibly poor. The only two highlights here are glucomannan and caffeine and amounting to half a gram being taken in 12 hours, even that is overdosed. The rest of these ingredients are at best unconvincing, at worst, known to be unworkable, as in the case of the raspberry ketones.

$20 for a decent fat burner would be great but for essentially 2 active ingredients? No chance. Just buy a bowl of high fibre cereal and a few cups of coffee, it would be cheaper. And very possibly more effective.

The label on this product is very misleading, it gives the impression of an entirely different balance of ingredients to the one on the website and it also doesn’t feature any specific dosages thanks to the proprietary blend.

No testimonial section on the Prime Nutrition website means we’re left to rely on those famously trustworthy Amazon.com reviews, most of which are positive. However these give very little in-depth detail and one customer awards 5 stars because even though they haven’t been taking it long enough to see results, the taste is great.

Prime Nutrition currently have a huge range of products to their name, all of which appear to be have been named with an almost comical lack of imagination. Whatever they’re paying their marketing department, it’s too much. The vast numbers of athletes representing the brand would restore some confidence, if many of the profiles (including that of the company’s own C.E.O) weren’t left unfinished. Not the most professional set up.

« Click for the best fat burners »
~ Our Top Fat Burners ~

Users take 1 scoop twice a day. Prime Nutrition Fat Burner is powder, which we personally aren’t a fan of. It can be a hassle to prepare and part of the formula is artifical flavouring.

The sheer amount of caffiene in Prime Nutrition Fat Burner means it’s likey you’ll have some side effects. Diziness, nausea, insomnia, racing heart, are all possibilities.

Where Can I Get Prime Nutrition Fat Burner?

Customers will find Prime Nutrition Fat Burner at Amazon.com for around $20.

Terrible start. One rave review on the Dr Oz show and whole sections of the fat burner industry when nuts for this. If they had dug a little deeper however they would’ve found studies only show success in rats at massive doses. Amounts which would have to be larger again for humans, far more than any supplement – including this one at a measly 100mg – could possibly offer.

This is more like it.. Few things get the metabolism moving faster, burning off far more calories. The energy it provides is vital to prevent crashes in stamina resulting from a low calorie diet. 250mg is quite high but as long as they don’t add any more stimulants and you aren’t too sensitive to caffeine, side effects shouldn’t be a problem.

Ah. Yerba mate is another stimulant very similar to caffeine. The stimulant profile will be a little strong for some by now. On the plus side though, studies do show that Yerba Mate can increase fat oxidation, but generally in much larger doses than here (around 1g)

An effective natural appetite controller which owing to its high fibre contentment swells in the stomach. This makes the user feel fuller for longer.

The Hydroxycitric Acid in Garcinia Cambogia has had some success in clinical trials suppressing the enzyme which dictates how much fat is drawn from carbohydrate, but thus far mainly in rats. Though human studies are disappointing.

Here in a tiny dose so it hardly matters but T2 is a replication of the thyroid hormone which dictates how fast every cell operates. It can raise the heat of the body, causing thermogenesis in a bigger dose. However most of its success has been seen in mice so far.

Green tea, green coffee bean and cayenne pepper would all have given Prime Nutrition Fat Burner a much more balanced and effective formula.

It may be called Fat Burner, but it’s far from the perfect example of what they should be. Weak formula, unclear label, poor serving schedule. One to avoid.