QuadraLean is a natural fat burner from RSP Nutrition which has taken gone the stimulant-free road. This always plays well from a marketing standpoint, but in our experience these products really lose something.

Sensible stimulant use – like a reasonable amount of caffeine – are key to most burners’ fat shredding and metabolism boosting abilities.

No replacement we’ve ever seen can match it for results. That said, we’re open minded so is QuadraLean the exception to the rule? 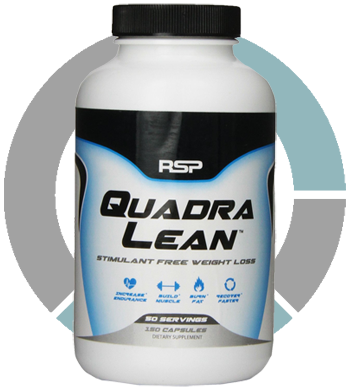 One thing to note is there are differences between the U.S & U.K versions of Quadralean, but we’ll cover both in this review.

Although most of the ingredients are given an individual dose there is a Carnitine blend. Normally we hate proprietary blends, but since it’s basically a blend of one ingredient, it’s not such a problem. Let’s get started.

We’ll get to the details in just a second, first though the overall scores…

Really poor, even by stimulant free standards. CLA doesn’t get close to matching caffeine as a fat burner, raspberry ketones are useless fad and Garcina Cambogia is far from impressive. The carnitine blend may help provide a bit of extra energy but no promises. Only white kidney bean in the U.K version stands out and even that needs a bit more research.

In terms of fat burners generally, this is cheap but for of Quadralean, it’s pretty badly over-priced. There is a 10 serving bottle available for even cheaper, or a buy 2 get 1 free deal, but frankly they can chuck any offer they want our way, unless they’re paying us, no dice.

As far as Quadralean being manufactured safely and complying with legal regulations, we can’t fault it. But when it comes to presenting useless or unproven ingredients as worth your cash this product falls way short.

Testimonials for Quadralean are limited to the reviews on sites which sell them. These are never the most consistent or reliable. On balance they are probably positive but very mixed, with negatives ones tending to reflect what we’ve outlined in this review.

Quadralean are a company based in Miami, Florida who have a range of products available aimed at encouraging a healthy lifestyle. They have a global reach and are relatively successful with no major scandals to speak of.

Users take 2 servings of 3 capsules a day on an empty stomach.

This could be better for a start 6 is quite a alot of capsules to be knocking back, and more importantly just 2 servings won’t sustain fat burning at the same level all day

The best burners usually go for 3 or 4 capsules a day spaced into as many servings. This is handy and won’t see effects tail off at any point.

One of the advantages of very little effect, is no side effects, so that’s something at least.

Where Can I Get Quadralean?

Really? Okay, I’m assuming you like how the bottle looks or something, but Quadralean is available from most of the main online outlets like Bodybuilding.com and Amazon where it is priced around the $20 in the U.S and £20 in U.K for a month’s supply.

CLA is the number one sub for burners without caffeine. These fatty acids do affect the PPAR receptors which control fat loss, but trials show they’re too weak to get results. A massive 6.8g has caused mild weight loss, but a still huge 3.6g does nothing. Both are way above anything Quadralean offers.

Included because many believe this fruit is a natural means of controlling appetite. Help with hunger while trying to lose weight is brilliant and something a lot of burners forget. Sadly this pick isn’t the greatest though. A Columbia University trial in 1998 gave 135 overweight subjects 3g of Garcina Cambogia for 12 weeks with no real results.

Wow. The mistakes just keep on coming. Raspberry Ketones are sold as a great weight loss secret thanks mainly to an appearance on the Dr Oz show. What fans don’t tell you is results have only been seen on rats, in massive amounts. For success to translate to humans a 150lb person would need 34-130 grams daily. 250mg in Quadralean then speaks for itself.

In the UK version you’re actually given doses for the 3 types of carnitine in this mix. 490mg of Acetyl-L-Carnitine, which can help fatigue, though mainly in older people. A small 9mg of Propionyl-L-Carnitine, which can boost energy. And a tiny 1mg of Carnitine Tartrate, which some studies show can reduce muscle soreness after exercise. There’s no way to tell if these amounts are the same in the U.S product.

Thanks to different rules across the Atlantic Garcina Cambogia and Raspberry Ketones don’t make the cut. Here’s what they’re replaced with.

A nutrient found in green leafy veg. One trial reported that in obese women craving carbs, 1000mcg daily was able to curb this appetite. Though in people who did not have the urge it was no help.

White Kidney Bean actually does have a bit of promise. Trials show that when carbohydrates and WKB are taken at the same time, it changes way the starches are broken down, reducing carb absorption. White Kidney Bean then might go some way to mimicking the effects of a low calorie diet. How well it will work in Quadralean though, we’re not sure.

We hate to say it but stimulants. Caffeine, green tea, green coffee bean, cayenne pepper. All these things would vastly improve Quadralean.

Quadralean does nothing to change our feeling on stimulant-free burners. Nothing here gets close to replacing the metabolism speeding, fat burning energy kick of a well-chosen stimulant.

It’s time people stopped seeing stimulant as a dirty word in burners. We’re not talking about meth, these are organic nutrients. Used sensibly, far from doing you harm, they’ll do you a lot of good.