Take a wild guess what our favorite word beginning with T is here at Cates Nutrition is. Well, yeah okay, *obviously.*

But our second favourite word is definitely … thermogenic.

Thermogenesis is the natural process by which your body heats up, burning more calories, then expending even more as your system works to cool it back down. Any fat burner which puts that magic word in its title, like QuadraLean Thermogenic, from RSP Nutrition, is liable to get our attention.

It takes a little more than that though. Thermogenic isn’t just some trigger word that sends us on a supplement buying spree. They’ve got to chat the chat and burn the fat! 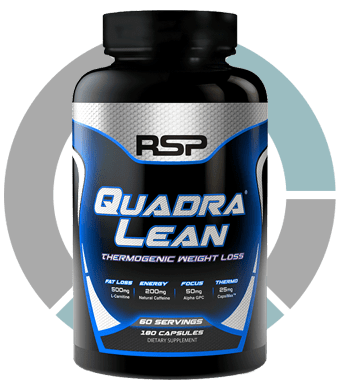 QuadraLean Thermogenic aims to bring you the following benefits:

Apart from maybe a bit of help controlling those hunger pangs, that’s everything you should look for in a burner.

But is it everything actually get in this one?

Well it’ll be easier to say for sure because unlike a lot of brands on the market we don’t have proprietary blends to worry about. All the ingredients are listed with their specific amounts, which is the least you should expect. Well done RSP, that gets us off to a good start.

Let’s see what we’ve got then…

QuadraLean Thermogenic has it’s good and bad points. Green tea is a staple of quality burners, so 200mg is welcome, though maybe we could’ve done with a tad more. 500mg L-Carnitine may help some go a little longer in the gym while choline bitartrate in the nuero blend should go some way to keep users sharp. Yohimbe can be useful as both a fat burner and appetite suppressant but you have to be careful about the dosage and 40mg may be a bit much.

Then there are the ingredients it’s tougher to find any pluses for. CLA is nowhere near as useful as the caffeine it’s there to replace, and bitter orange extract is a risk because there’s the potential for serious side effects. Cayenne pepper should be a strong pick thanks to its thermogenic qualities, but a mere cameo of 25mg means it’s essentially label dressing. There’s nowhere near enough of it.

Under $30 for a booster is actually very reasonable but you’ve got to weigh saving a few dollars against being short changed on effectiveness. It’s cheap enough that you give it a try for a couple of months, but is it the sort of product you’d be willing to pay for on an ongoing basis with the flaws we’ve mentioned?

QuadraLean Thermogenic has plenty of strong reviews on sites like Bodybuilding.com so it deserves some props for that. However these feedback sections often lack the essential details you’d be looking for before parting with a chunk of change. They can also be a bit of a playground for marketing men, or at least those who aren’t exactly unbiased.

We keep saying it, but it’s best to have 3rd party site reviews AND an official company testimonial section for burners. Okay, their not exactly impartial either, but if they’ve got plenty of detail – customer’s full names, stories, weight, photos, videos – they’re hard to fake. And if they square with what you’re reading elsewhere, then you can be confident in your purchase.

QuadraLean is well known enough that if there were any worries about how it manufactures supplements, we’d know. Also as we’ve said, we appreciate all the ingredients and dosages being there on the label. But that doesn’t mean it’s all good news.

Taking components that clinically just don’t appear to do much, like CLA, for exmaple. Ans we’ve always had real problems with the use of bitter orange extract. There’s a real chance of unpleasant side effects, as there might be with yohimbe. You can read more about these issues below in the ingredients detail section.

RSP Nutrition are an impressive set up out of Miami, Florida. They have a vast range of supplements, global reach and a solid base of dedicated fans. They also have a number of high profile fitness personalities willing to appear under their banner.

It’s really only their formula choices we take issue with, but that’s the most important part at the end of the day so we’ve not going to go nuts with the marks here, sorry.

Users should take 1 serving of 3 capsules twice a day. First thing in the morning then 4 hours latr.

This serving schedule gets off to a great start, but tails off in the back 9. Why only top up active ingredients in the morning and afternoon? Unless you’ve got you’ve got the bedtime of a toddler, effects will fade later on if you only go for 2 servings.

The most successful boosters – and the majority of our readers – favour 4 evenly spaced servings a day for best results. Constantly refuelling means consistent performance.

Any QuadraLean Thermogenic Side Effects?

Synephrine or Bitter Orange extract has been known to cause dizziness, nausea, headaches and sweating. It can also raise your heart rate and blood pressure, leaving you at a greater risk of heart attack or stroke.

Too much yohimbe can cause stomach upset and in some cases increased anxiety. The usual dose of yohimbe is 15-30mg, but QuadraLean Thermogenic contains 40mg. Just be a little careful.

Available from bodybuilding.com website, currently on offer at under $20 for 90 caps.

Even though QuadraLean Thermogenic isn’t technically caffeine free, it’s only found in trace amounts in ingredients like green tea. There’s no caffeine other than that. This really takes the edge off a burners effectiveness. The reality is if it’s dosed correctly, a natural stimulant like caffeine doesn’t have to be a negative.

Not much in the way of appetite control on offer here, which is a shame because hunger pangs are inevitable. It’s as simple as adding a fibre rich natural ingredient that expands in the stomach making you feel fuller for longer – in other words, glucommannan.

A reasonable price and a few strong ingredients can’t save this QuadraLean from putting the meh in thermehgenic. Burners can’t be expected to shift your dead weight if they’re carrying too much of it in their own formula!