Generally speaking, fat burning supplements shouldn’t be a substitute for hard work. But – unless you’re a sleepwalker who occasionally breaks into a jog – while getting some shut eye they sort of have to be.

This has led to a rise in the number of night time burners available. Most of these are meant to be taken over and above a daytime product so your weight cutting is a 24hr operation. Sound great, right? Every little helps and all that.

Well … no actually. Some may help, but just like the brands pulling the day shift, these night burners vary in quality. Many night time boosters will be as inactive as you are in those hours.

In this review we’ll be finding out whether Sheer Shred PM from Sheer Strength Labs is actually worth your money. 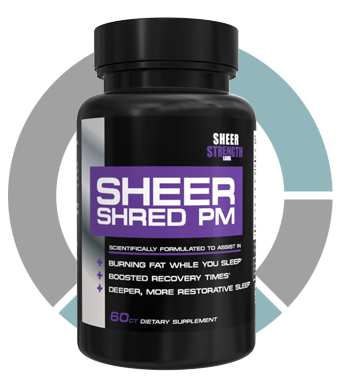 Thankfully everything we need to know is right there on the label. No proprietary blends or hidden dosages, which is something you should always look for in a burner. Let’s crack on.

As far as we can see Sheer Shred PM is in a position to do half its job pretty well and has forgotten about the other half. Melatonin, lavender, GABA etc will give you every chance of getting a good night’s rest, but most of the fat burners here are pretty unconvincing.

White kidney bean shows some promise as a calorie blocker but needs more evidence, likewise hops. Dandelion may help you shift water weight in the short term but not much more than that. It’s tough to see why night boosters don’t just double up on what is proven to work during the day (with the exception of caffeine obviously). Half a job done well, so half marks.

At around $30 this is about mid price range for a burner. If this wasn’t a PM specific product meant to be bought in addition to another supplement, it would probably score higher. It is though so it’s probably going to push your overall spend up quite a bit and in this case, on balance it’s probably not worth it.

There aren’t many detailed testimonials on the official site so you have to go to user feedback on sites like Amazon. It’s really up to you how much stock you put in reviews that often lack depth, but to be fair it does rate generally positively.

Plenty of people saying they feel better on waking with just a handful saying it really did nothing for them. This would be resonate with the scores given to the formula – the ingredients to help promote sleep are good.

Sheer Shred PM is manufactured in the U.S so complies with cGMP regulations. The team also don’t use proprietary blends to cover up any info which is so important.

Really our only issue is some of these fat burning choices aren’t as potent or proven as you’d probably want them to be.

Sheer Strength Labs are a Chicago based company with a wide range of natural supplements geared to all aspects of health and fitness. There’s no question of them being any kind of scam and even though we disagree on a formula choice here or there there’s plenty to like about this company.

No proprietary blends, a money back guarantee if your not satisfied, even a military discount. That’s good business folks.

Normally we like to see more than one serving spaced out over hours, but obviously for night time burners that’s not really possible. Hard to be too critical of this then.

Any Sheer Shred PM Side Effects?

Aside from individual allergies we can’t see most users having problems with side effects based on what’s included here.

A few more proven fat burners along side the stuff to relax you. Green tea and cayenne pepper for example. We know they can get the fat burning job done, and despite the name green tea is very low in caffeine so won’t interfere with rest.

Sheer Shred PM might help improve the quality of your rest, but as far as exciting fat burning choices go, it nearly put me to sleep all over again. Would we advise you add this to your supplement regime? Probably not.