SHR3D-X, from supplement company, EVO-X Health is a fat burner that promises to boost energy, burn fat and ‘kill appetite.’ We’re hoping that means takes the edge off our hunger and they just got overexcited. I mean, let’s not go nuts here. Fewer hotdogs, sure, but no hotdogs? I choose death.

Anyway, SHR3D-X has some pretty glowing reviews on Amazon, where it’s mainly available. It’s currently has a 4 and a half stars based on over 2000 reviews. 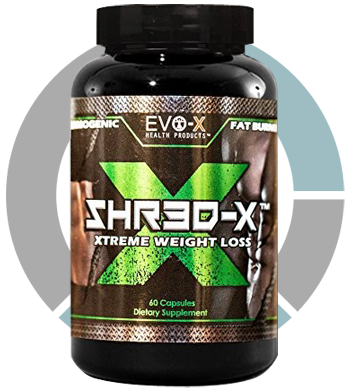 Impressive, but we all know the Amazon review section isn’t exactly a court of law. So it’s time to check how much truth there is to the hype.

One of the things we have a problem with right away is SHR3D-X’S formula being in a proprietary blend. That means names of ingredients but not doses, just an overall volume.

Amounts make a big difference and without them it’s difficult to tell how good a burner will really be. But let’s have a go anyway.

We pick the bones out of that lot later in this review. First though, the overall scores…

In actual fact a handful of these choices are not bad. But it’s the question mark over dose that lets some SHR3D-X down. Limited space shared between this many ingredients means some will be lacking. It’s a question then of whether it’s the good, like green tea and coffee bean or bad like raspberry ketones. The appetite control is poorly chosen but some other parts of the formula show promise

Not terribly expensive, although not terribly impressive either. There are more effective, better value burners out there for sure.

Produced in the U.S we’ve no worries about SHR3D-X’s saftey, but hiding your dosages in a proprietary blend, doesn’t inspire trust. Neither does expecting you to pay for dicredited ingedients like raspberry ketones and garcinia gambogia. Needs work.

No testimonal section such we have to go to reviews on sites like Amazon. Though a lot are positive, it is Amazon, so take that feedback with a pinch of salt. The near perfect reviews don’t reflect the research on many ingredients here, so we’re inclined to think the most active thing about Shr3ds is its P.R team.

EVO-X are an extremely professional company with a wide range of successful products besides this. There website goes into a lot of reassuring detail, including confirm all their brands are FDA & GMP approved. Our only complaints are the proprietary blends and discredited ingredients.

This is not so great. Front loading your servings like that means there’s a very good chance fat burning effects will tail off lter in the day. So will any energy SHR3D-X is providing, leaving you opten to crashes.

A good rule of thumb to look for is 3-4 evenly spaced out servings a day. This ensures your body will be fully supported right up until you go to bed.

We wouldn’t expect any side effects from this formula.

Where Can I Get SHR3D-X?

Customers can get SHR3D-X from a number of online stores, though the cheapest we found was Amazon.com. It’s priced at just under $30 for 60 capsules.

While a small study did show that B3 could increase fat oxidation, 15mg is nowhere near the 500mg that research used.

B6 can help regulate your blood sugar which is important on a low calorie diet and B12 is a good source of energy to help with that too. Both are here in pretty small amounts though we’re not sure how much good they’ll do.

Great choice. The catechins in green tea increase norepinephrine, the body’s main fat burning hormone. It’s also packed with antioxidants so has plenty of other health benefits. The only really problem is not knowing the amount. The volume has to be high enough for green tea to do the job, otherwise it’s pointless.

Another strong pick as green coffee bean contains chlorogenic acid. This stops glucose breaking down in the liver to be used as energy. Obviously your body needs energy so it starts burning through your excess fat stores instead. You’ve got to remember we don’t know the dose here though.

Taurine is an amino acid popular in energy drinks. This suggests it provides energy but in fact it seems more useful as a recovery aid after exercise. A 2013 study found it helped middle distance runners revive quicker.

In the right amount this herb can reduce fatigue and improve focus. This is a real help in avoiding the energy crashes that come from a reduced calorie diet. Once again though, it’s all about the numbers we don’t have.

This can reduce weight in clinical trials, but success is mainly seen in obese subjects take much higher doses than anything in SHR3D-X. So another choice that’s questionable.

Yacon Root is sometimes used as a digestion aid in alternative remedies. Interestingly however at least one study suggests it may prevent the breakdown of testosterone in mice. There’s a strong link between high T, muscle building and fat burning, so we can see the logic in this. Could do with more research though.

This is a real waste of limited space. Raspberry ketones we’re briefly the next big thing in fat burning, however the only results they have every produced are in rats and at massive doses. So the human equivalent would be way more than any supplement can hold.

Sucessful at lowering body weight in doses of 250mg. No guarantee of that here though, as we’ve covered.

This fruit is an attempt at appetite control but studies show it has almost no effect on hunger, so it’s another dud.

No caffiene is a suprise. That’s just about the best natural stimulant there is for speeding up metabolism an topping up energy. The thermogenic effects could be bettered by adding something like cayenne pepper. SHR3D-X badly needs a more proven appetite supressor also.

Not bad, but patchy formula and hidden doses stop us getting too enthusiastic. Therefore we’d advise you save your cash for a burner that talks the talk AND walks the healthy calorie burning walk.