One the key things to look for in any natural fat burner is its thermogenic profile.  These are the ingredients that heat your body up, helping you to melt far more calories than usual.

Straight away then Six Star Thermogenic Shred sounds to be a winner.  It’s got what we’re looking for right there in the title. 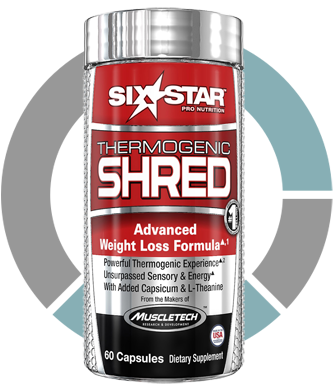 What’s in a name though?  I could legally change my name to Sexy McHotface, wouldn’t necessarily make it so.

The only way to find out if Six Star Thermogenic Shred can burn fat, raise energy and help control hunger pangs is by checking out what’s beneath the label.

This means we can give you a full review and flag up any ingredients which aren’t there in the right amounts or might cause side effects. Let get started…

There’s some stuff we really like about Six Star Thermogenic Shred. A solid amount of green coffee bean is a great start and if the stimulants aren’t too much for you they’ll definitely kick your metabolism in to gear. Yohimbe is a possible hep too. But there are some issues. Caffeine and theobromine together mean the formula has to make room for Theanine too take the edge off any side effects.

That room would be better spent on thermogenic must-haves like green tea or a decent amount of cayenne pepper (only a pathetic 1mg here). Other ingredients need more research and there’s hardly any appetite control here at all, which is disappointing.

If you can find it for under $20 like we did then that is very cheap for a booster and to as we say this brand has some good points. If you think you can white knuckle through those cravings and you’re not too sensitive to caffeine, this is a possible budget option. For everyone else, it’s probably better to keep your money for a product which helps with apetite and is a little eaisier on the stimulants.

There’s no testimonal section on the Six Star website so it’s into the wild west of retail site reviews. On balance it scores positively, but some are much more enthusiastic than others and may contradict each other. “Great burner” “Did nothing” “Nice jitter-free supplement” “Felt like I’d had 3 pots of coffee” Without the detailed personal acounts in a testimonial section it’s impossible to build up a consistent picture. Always look for one of those.

There’s nothing dangerous about Six Star Thermogenic Shred and they’re not trying to hide anything in a proprietary blend. The only issue we’ve got really is with a few formula choices. At least one ingredient here is a bit light on evidence that it works and suggesting that just 1mg of cayenne pepper js going to help anyone is taking the piss.

Not much company info on the Six Star website, but they have produced a professional looking range of supplements to aid all aspects of exercise and healthy living.  No money back guarantees, because at so cheap it’s hardly worth it. A little more background info, but besides that, the company appears solid.

The makers know there’s a lot of stimulant in their product so they advise you build up your tolerance to Six Star Thermogenic Shred.

Even after all that the serving schedule isn’t ideal.  Just 2 servings probably aren’t going to sustain fat burning effects at their max for a full day.  You will get a dip later, and with a lot of caffeine involved that could mean energy crashes.

Smart boosters tend to favour 4 servings spaced out through the day to keep active ingredients topped up.

The stimulants might be a smidge high for some, as the company accept themselves, by suggesting you work up to the full 2 caps twice a day amount. The side effects you can expect are ones anyone who’s had too much coffee will recognise.  Headaches, nausea, insomnia, jitters etc.

Yohimbe an be useful but it can also be problematic. In some it can cause hypertension, anxiety and stomach problems.  The exact dose at which people have issues isn’t exactly agreed upon but within 15-30mg is what most burners go for, usually with no problem.

Green tea is a cornerstone of all the best fat burners. It’s one of the best thermogenic ingredients there is, so we’re suprised to see this off all supplements leave it out. We’re going to say cayenne pepper too, because though it’s here, the makes are really only namechecking it.

The focus is very much on burning fat and raising energy to keep you going in the gym clearly. But a bit of help regulating hunger is always welcome. The safest way to do that is with a fiber-rich ingredient which keeps you feeling full between meals. However, none of that here.

With green coffee bean and plenty of stimulants, Six Star Thermogenic Shred will almost certainly have an effect, it’s just a shame users can’t agree on what that is exactly. At under $20 it’s probably cheap enough to find out.

But why potentially waste your time and money when their are a lot of better burners out there which are proven to get results.