Back in the days of the old west, during in the gold rush, if you had a large mass stopping you achieving your goal the first thing you would reach for is the TNT. 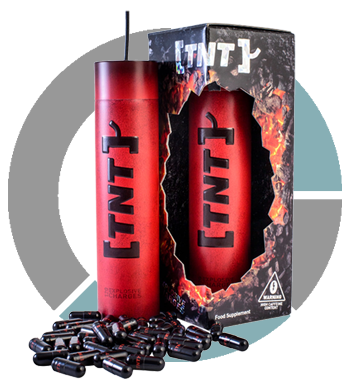 It even comes in a bottle shaped like a stick of dynamite, so at the very least this will make a kind of an awesome desk ornament. But so would a David Hasslehoff snow globe, we’re interested in results not trinkets!

Explosive fat blasting is what we’re promised, but is that what you’ll get?

Happily TNT Supplements are a British company which means for the most part all the ‘rock solid’ formula info and no proprietary blends obscuring dosages.

Right, we’re prepared to be blown away, let’s see what they’ve got…

Beyond solid amounts of fat burning must haves like green tea and caffeine, Strong To The Core’s line up is pretty patchy.

Some largely unproven choices like TTA, other potentially problematic ones like Bitter Orange Extract and a couple of ingredients with uses but no direct weight loss benefit like L-Tyrosine and ginger.

There are a few other components, which we’ll go into below but no real game changers and overall this recipe is disappointing.

Under £30 for a burner is actually pretty good, but balanced against what you’re getting we’d stop short of calling this a bargain.

Just because it’s not a lot for a supplement doesn’t mean its not still a lot. Remember ideally you’ll be coughing up every month until you reach your target weight, so you’re better to do that for less time by getting the most efficent burner. This isn’t it.

We want more bang for our buck.

The TNT Supplements page does have a testimonal section featuring a handful of users, some before and after pictures and a short paragraph. This is better than nothing which is what a lot of other brands offer but we’d like to see a lot more users going into a lot more detail.

Reviews on most retail sites are generally very mixed.

Strong To The Core is made in the U.K and has to comply with the country’s regulations, so we’ve no real worries about saftey on that score, but trust is more than that.

On the website this formula is billed as 100% killer, 0% filler and the clinical evidence just doesn’t back that up. It’s misleading. Also there could be more mention made of the potential issues with synephrine.

We couldn’t actually find a lot about the background of TNT besides the fact they are based in Britain. Almost all of their website is geared towards marketing their products, which include a Test Booster and Pre-Workout alongside this. We would prefer to see a lot more info on the company to gauge professionalism and experience.

They’re not as established as some of the other big companies so we need more background.

Users are told to take 2 servings of 2 capsules a day.

Taking these kind of fat burning supplements just twice is far from ideal. Gradually what effects there are will taper off after a few hours and need topped up. If you’re limited to 2, no matter where you position the servings there will be parts of the day where it’s not working as well.

The way to avoid any imbalance is to find a burner with 4 evenly spaced servings so you’re constantly refreshing active ingredients.

Any Strong To The Core Side Effects?

Unless you’re particularly sensitive to caffeine the only ingredient here that gives us cause fir concern is Citrus Aurantium. Like most villains it has a couple of aliases, sometimes known as Synephrine or Bitter Orange Extract.

Problems can occur when its mixed with caffeine, as it is here. There are reports of users experiencing headaches, dizziness, sickness and rapid heart rate. Most worrying of all it can raise blood pressure increasing your risk of heart attack and stroke.

Customers can find a month’s supply of TNT Fat Burner at Dolphin Fitness for just over £28. This brand is not currently widely available in the U.S

There’s no help with appetite control in Strong To The Core Fat Burner, which is a shame, that’s always a useful bonus you should look for your choice to include.

Also ingredients like L-Tyrosine, ginger and TTA could have given way to more useful ingredients like green coffee bean and cayenne pepper to increase thermogenisis and get that fat melting even faster.

Strong To The Core Fat Burner has a handful of good ingredients and isn’t overly expensive, but promises of a 100% formula have rather blown up in TNT’s face. Cool bottle, but it’s whats inside that counts and we’ve seen much better out there.