The purpose of a natural fat burner label – of any label really – is to draw you in. To really sell what makes it special. Everyone knows that.

Everyone apparently apart from supplement company MyProtein when putting together their burner Thermopure. Frankly we’ve seen more inspiring and creative labels on homemade cookies at a bake sale. 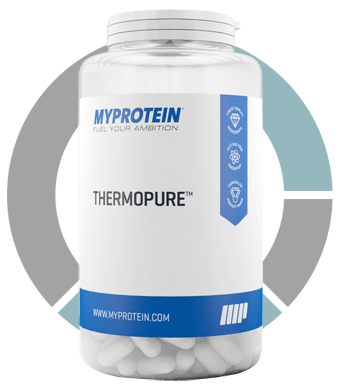 In fairness though, a label is just a label and the bottle is see through. So maybe what they really want us focus on is the capsules themselves, which are most important after all.

Huh. That’s weird. No mention of thermogenesis, fat burning, anything like that. I mean that’s arguably the most important part of any burner and it’s in the name.

The marketing for Thermopure is bit like that movie voice over guy doing the trailer for Aliens and leaving out the aliens.

The label may be no party in the front, but fair play it’s all business in the back. No proprietary blends. Full ingredients and dosages on display. So let’s see what we’re actually dealing with here …

Thermopure sold itself a little short by not making more of its thermogenic profile. There’s a decent, if not mind-blowing, amount of green tea and cayenne pepper. Both of which raise your body temperature and burn extra calories. Likewise caffeine is not just to raise energy and sharpen focus, it also seriously boosts metabolism. Possibly not as much here as it may have done with a bit more than 175mg, but it should still be helpful.

There’s nothing really terrible in the supporting roles either. B vitamins should help with energy while L-Theanine will support staying alert and L-Tyrosine may help to suppress appetite. Not bad then but better amounts would get a higher score.

Be aware that the formula appears to have changed recently (at time of writing, March 2018). A couple of disgruntled ex-fans on the MyProtein site voicing their disappointment; 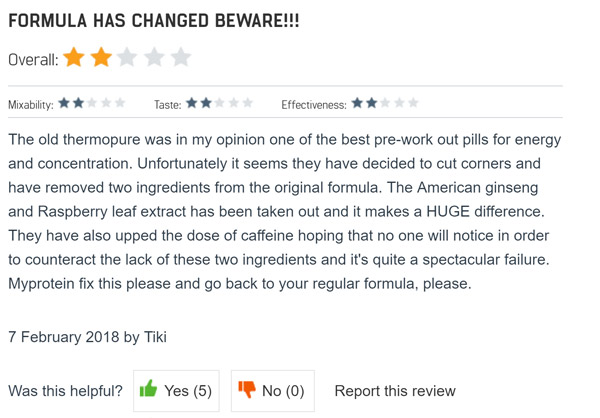 Thermopure is down the cheaper end of the price scale for this kind of product, coming in a little under $20.

That’s great but you have to weigh that against the overall quality you’re getting. It’s not just about numbers, there’s value to think about too. We’d still class this burner as good value, as long as you’re aware that you’re paying a little less because you compared to the best brands at least, you’re getting less.

The only testimonials available are on the My Protein website and you can’t really call them testimonials. It’s more just short written statements from verified customers.

While these are overwhelmingly positive, they lack any kind of detail which might win you round if you’re on the fence about Thermopure. No author info, or media like before and after pics. The makers seem content to let the reasonable price tag do the talking.

Thermopure is made in line with GMP regulations so is safe. Plus even though it’s a bit shy about giving info, it has it where it matters, full ingredients.

However, something just doesn’t sit right about how vague this product is generally. About what it will do for you, about what it actually is. Normally you can’t shut these brands up about the benefits. Seems like it’s hedging its bets in case of disappointment and we don’t love that.

My Protein are a large, successful company founded in the U.K who’ve been around for over 20 years. They offer various kinds of natural supplement, covering nearly all areas of health and fitness.

They ship to 16 major countries around the globe and go into a lot of detail on their website about the safety of their product. There are really no major scandals or concerns so thumbs up here apart from that little extra info we’ve talked about.

On workout days you should take 3 servings of 1 cap a day with meals.

That’s actually not bad. It should ensure that Thermopure’s active ingredients are sufficiently topped up throughout the day. We’d probably have thrown an extra serving in there as a cherry on top, but hey, who’s counting (apart from us)?

What about rest days then? Well Thermopure leaves us hanging on this. There’s just no info again. The same serving schedule would be useful, but you shouldn’t have to guess this stuff.

Thermopure looks like it should be pretty free of side effects. With the one exception being that if you take caffeine too late in the evening, as you might do if you are eating later, it could cause problems as far as getting to sleep.

You’ll find Thermopure from the MyProtein sight for $18 and £26 which buys you month’s supply.

It would be good to see the fat burning potential here boosted by something like green coffee bean and the appetite control strengthened.

What’s also missing is the manufacturer getting excited about their own product, look at this for goodness sake;

We think Thermopure should come out the the fat burning closet. Even though there are some pre-workout elements, that’s clearly what it is. Say it loud and proud.

It’s not even a bad fat burner. It’s not a great one for sure and it’s certainly not the best one, but it’s cheap enough to be in the running as a budget option.