In common with most of our readers, there are two things we love to burn and one thing we don’t. We’re all for burning fat and energy, but we’re not so hot on burning money.

That’s why we are keen to take a look at Trans4orm Thermogenic Energizer from Evlution Nutrition. It promises not only to burn fat but also increase physical energy and mental focus.

In all Trans4orm Thermogenic Energiser aims to to deliver: 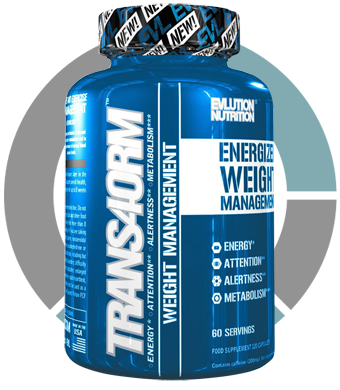 Nice to see we’ve got some natural help with hunger, which not all burners do.

The full package then?

Trans4orm Thermogenic Energizer is rated highly and selling well on Amazon.com currently, which would suggest it’s won plenty of people over already. Anyone familiar with how that site works though will know success is often more down to the guys in suits than white coats.

The good news is we’ll be able to see how worthy of its popularity this burner is because there are no proprietary blends. All ingredients are there with their individual doses, just as should be.

As burners go, Trans4orm Thermogenic Energizer is a pretty solid effort. We particularly like the strong 500mg dose of green tea, which is one of the best natural fat melters around.

175mg of caffeine should be enough to give your metabolism a much needed kick without causing unpleasant side effects too. Add to this 20mg of yohimbe, which has been shown to burn fat and there’s a strong spine of ingredients.

There’s really nothing bad here, the only issues are the dosage and effectiveness of what is and a few things that are missing. Alpha GPC, Coleus Forskohlii and L-Tyrosine are all potentially useful but their amount is possibly a little light. The thermogenic profile and appetite control could also be better.

Under $30 is very reasonable for a burner and if Thermogenic Energiser’s formula was the full package we’d definitely give you the green light to go out and pick it up. Hell, we’d go and pick it up.

But there’s just a few things missing from this formula which makes us think twice. We’re not saying $23 is not good, just that when it comes to getting results, there’s better value out there.

This product has really strong reviews on Amazon and there’s plenty of them. One reviewer however claims to have sampled a number of unverified 5 star reviews and found them to be fake. Not all of them, but this is always a risk when you’ve just got short, relatively detail free feedback on retail sites to work with.

It’s far better if companies have comprehensive testimonial sections on the website, with named users, photos, before and after weight and personal written statements. The more info you have the less likely it is to be a scam. Always look for a testimonial section.

Evlution Nutrition is a large operation and it would be more than their reputation is worth to be dangerous in any way, so this product is as safe as you could expect.

All the formula information is right there on the label for customers to see which is really important. There are also no ingredients you could call completely useless in this formula, but because a few of the dosages don’t quite reach active levels and one or two ideal components are AWOL, we can’t give top marks.

EVLution Nutrition are one of the better established supplement companies in the market and have a range that reflects that both in size and sales.

The website boasts awards so we can’t argue with their success. One criticism we might make is they offer trial packs of product containing just a few servings rather than money back guarantees.

Users 1 serving of 1 cap first thing in the morning before eating and a second 4-6 hours later.

This could be better. It means you’ll be sorted for the morning and afternoon, but unless you’re 8 months or 80 years old, your day probably won’t be ending then. Active fat burning ingredients will begin to wear off in the evening meaning you’re not getting the most burn for your buck.

In our experience and based on feedback we get from readers, 3-4 evenly spaced servings a day is the best schedule to ensure maximum effectiveness.

Any Trans4orm Thermogenic Energizer Side Effects?

We can’t see any serious problems with side effects, but the first serving is taken on an empty stomach and contains caffeine, which may cause mild nausea in some.

Available from bodybuilding.com website, currently on offer at under $20 for 90 caps.

Given that thermogenic is in the name this product could do with a little more oomph in that department. A capsaicin rich ingredient like cayenne pepper would have strengthened Thermogenic Energizer’s calorie melting abilities.

Relying on yohimbe alone to keep on top of hunger pangs isn’t ideal. A fibrous ingredient which expands in the stomach to make you feel full for longer periods of the day would be handy.

Trans4orm Thermogenic Energizer isn’t perfect, but it’s far from terrible as its strong sales figures would seem to back up. So not the best but if you’re looking for a budget option this is one for the maybe pile.