Trans4orm from established supplements company EVLution Nutrition (not to be confused with Trans4mation incidentally!) bring us this slightly updated version of a pre-existing product.

It promises improved results in the four main areas of fat burning, metabolism boosting, energy raising and appetite suppression, but then … don’t they all? 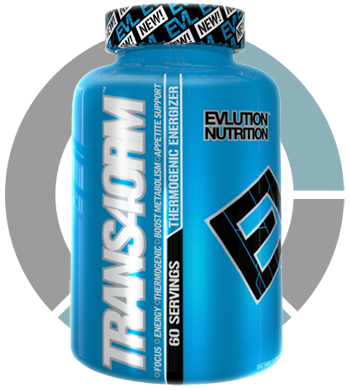 The only way to test the validity of all this fanfare is for us to dive in there and cast a clinical eye over proceedings on your behalf. Let’s see what we’re working with here.

How Does Trans4orm Work?

Right away we have to give Tran4orm props for not hiding any of their formula in a proprietary blend, this means you’re going to get a look at each ingredient and its dose, painting a much clearer picture of what to expect. Let’s get started.

As always there is a full breakdown of the ingredients further on in this review. Firstly, how does Trans4orm rate??

Trans4orm starts out well with a good B vitamin profile, healthy amount of green tea and reasonable caffeine content, but after that either the ingredients or their doses are questionable. Synephrine always makes us uncomfortable due to the potential for severe side effects, and many of the cognitive or energy enhancers included are unproven or there in such small amounts it hardly matters.

After all, it’s a fat burner and not a nootropic – so quite simply it should have more fat burning ingredients in it.

Under $35 for a brand so packed with ingredients, a handful of which are real quality is not bad, but given the risk of side effects we’ve talked about and a few components realistically being there just for show, it could stand to be a little cheaper.

Frustratingly there’s no testimonial section on the EVL website so you’re heavily dependent on customer feedback on retail sites. Trans4orm has high scores on both Amazon and Bodybuilding.com, with reviews on the latter often being quite knowledgeable, but without the detail of lengthy testimonials at lot has to be taken on trust.

While we appreciate the clarity that comes from no proprietary blends, to our minds no supplement with Synephrine can ever be said to be entirely safe. And again a few ingredients, though included are beneath an active dose.

EVLution Nutrition are one of the better established supplement companies in the market and have a range that reflects that both in size and sales.

The straightforward but professional website boasts awards a-plenty so we can’t argue with their success. One criticism we might make is they offer trail packs of product containing just a few servings rather than money back guarantees.

Directions state you should take two servings of two capsules per day on an empty stomach, 4 to 6 hours apart. We don’t feel this is enough to guarantee burners work at their maximum throughout the day. It’s no accident that the supplements which see the best results typically suggest 3 to 4 evenly spaced servings.

It always pays to be careful where Synephrine is involved, in certain cases, especially when combined with caffeine it can raise your heart rate and blood pressure, significantly increasing your risk of heart attack or stroke.

The cheapest we found Trans4orm was from Amazon.com for $34.99 which gets you 60 capsules.

Vitamin B3
This nutrient is useful in a number of general ways but specific to weight loss it provides a useful energy and encourages the production of L-Carnitine, an enzyme crucial to making the fat burning process more efficient.

Vitamin B6
Also well-chosen not only for it potent antioxidant qualities but its noted metabolism boosting effects. B6 also promotes muscle growth by increasing the absorption of vital amino acids and proteins and muscles equal less body fat.

Folic Acid
Often used in combination with B vitamins to aid their function, but folic acid has its own standalone benefits too, mainly when it comes to improving cognition, focus and boosting mood.

Vitamin B12
Another effective energy booster which also helps speed up the metabolism and encourage muscle growth through the efficient processing of essential proteins.

Green Tea
Green tea is an inspired choice. Key to any fat burner’s effectiveness is its thermogenic profile and they don’t come much more impressive than this powerful antioxidant. Green Tea’s catechins stimulate a fat burning hormone called norepinephrine, which naturally raises the body temperature, vastly increasing the number of calories burnt. 500mg is the kind of dose we like to see too.

L-Tyrosine
No direct fat burning benefits in this case, but it does promote feel good hormones such as dopamine and in studies has shown it is able to improve both cognition and focus. Even better it is able to do so at the 500mg level featured in Trans4orm. Potentially helpful for getting your head in the game on those days when you’d rather do anything but workout.

Caffeine
Just about the best natural stimulant available. Caffeine not only speeds up your metabolism significantly, helping you to burn through far more calories than usual, shedding the pounds quicker; the energy boost it provides is perfect for sustaining your energy levels at a time when a reduced calorie intake would ordinarily have them crashing. Obviously if dosed incorrectly you can experience side effects, but 175mg should avoid this.

Choline Bitartrate
Once ingested Choline interacts with certain neurotransmitters, theoretically helping to improve areas such as memory, attention and muscle control. Like L-Tyrosine, it doesn’t bring a whole lot to the table as far as actual fat burning and is likely included as an attempt to keep you mentally sharp and stave off any sluggishness resulting from your low calorie diet.

Theacrine
Here essentially to strengthen Trans4orm’s stimulant line up because like caffeine, theacrine mainly boosts energy and alertness. Again, handy for firing you up for an exercise session, which is why it’s becoming increasingly popular in pre-workout products also.

Alpha GPC
Alpha GPC is a cholinergic compound which functions by increasing Acetylcholine, a neurotransmitter associated with learning and memory function. It also plays a part in concentration and focus but only alongside Noradrenaline and Dopamine. At a mere 25mg however (standardised to 50% meaning possibly as little as 12mg of active component) it’s unlikely to bring much to the party.

Synephrine HCL
Sometimes called Bitter Orange Extract, this ingredient has demonstrated the potential to boost both energy and metabolism, albeit somewhat inconsistently. It has a significant downside however, when combined with caffeine, synephrine can provoke some serious side effects and may pose significant health risk.

Black Pepper Extract
Included for no other reason than it allows the other elements to be better absorbed by the body. At 1.25mg though we feel they might’ve been a little more generous to help this tried and tested process along a bit.

Rauwolscine
A close chemical relative of Yohimbe it supposedly works in much the same way, by blocking the Alpha receptors in the brain which prevent the breakdown of fat into energy, allowing you to shed more as you exercise. Which works better or whether either work at all is irrelevant here as we’re into microscopic dosage territory.

Huperzia Serrata
Another brain booster. The active compound in this ingredient, Huperzine-A works in a similar way to Alpha GPC in that it enhances recall and to an extent concentration. As a result it’s often thought of as a supplement more for the elderly, but better memory is something we can all benefit from and surprisingly 100mcg is at the lower end of its effective range.

There’s the basis of a solid fat burner here which just seems to veer off in too many directions at once.

Had they kept it a bit simple with tried and tested ingredients in the vein of green tea and caffeine it would’ve scored higher for us. Still potentially worth a punt if you’re willing to risk the more questionable choices.