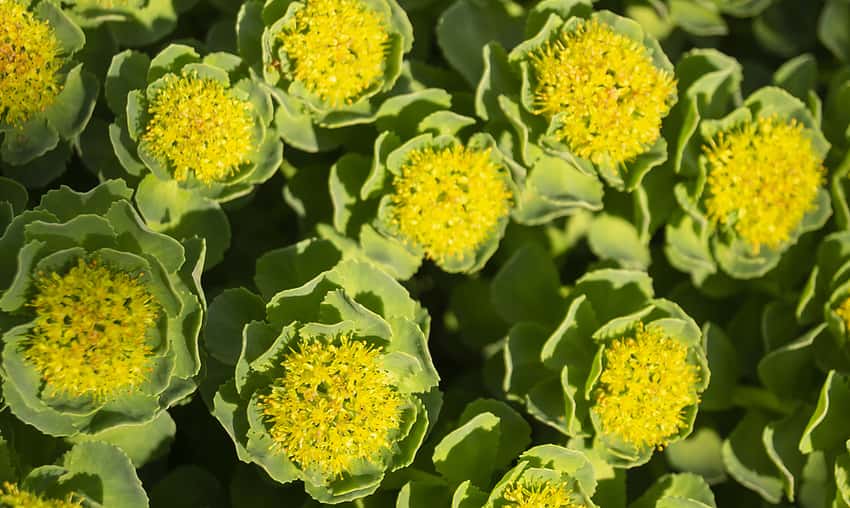 Among all the adaptogen herbs, it may be the most potent one at relieving fatigue. Especially the one caused by cortisol overproduction and adrenal “burnout”.

In terms of brain health, Rhodiola raises dopamine and serotonin levels. This effect is thought to be similar to that of some prescription anti-depressant drugs, but with a dramatically lower risk of side effects.

How Does Rhodiola Rosea Work?

Rhodiola is perhaps best known for its anti-fatigue benefits. It provides a clean energizing effect that doesn’t result in a crash or jitters you’d typically get from stimulants like coffee.

However, Rhodiola also lowers stress hormones – particularly, it inhibits cortisol from overproducing. It also optimizes your body’s HPA axis, which includes not only adrenals but also the hypothalamus and the pituitary gland in the brain.

This has major impacts on physical energy and overall quality of life. When cortisol is being over-produced, your body’s HPA axis gets dysregulated. This can lead to chronic fatigue and what people often call ‘adrenal burnout’.

One study with 101 highly stressed volunteers highlights Rhodiola’s potency. The study found that just 3 days of supplementation led to massive improvements in their stress levels and daily functioning. What’s more, their physical energy and overall vitality continued to improve even after 4 weeks of supplementation. [1]

As we’ve touched upon this briefly, your HPA axis is responsible for countless functions in your body. Mainly though, it governs your stress response. If the feedback loop between adrenals, the hypothalamus and the pituitary gland is dysregulated, you may start feeling down, depressed, and low in energy.

Active compounds in Rhodiola have been shown to improve the HPA axis. Specifically, Salidrosides in Rhodiola affect the expression of a heat-shock protein Hsp70, which helps your cells adapt to repeated exposure to the same stressor. [2, 3, 4]

However, Salidrosides in Rhodiola don’t affect Hsp70 in cancer cells the same way. This contributes to Rhodiola’s anti-cancer effects.

The key takeaway is that healthy cells and tumor cells don’t act in the same way. Rhodiola’s compounds ‘sense’ this so to speak, and depending on the cells they target and their health, they’ll turn the Hsp70 pathway “on” or “off”.

Rhodiola is often touted as a natural libido booster. It’s especially effective at improving libido and sexual function that were impaired by high levels of stress.

In a study with 120 adults, the researchers wanted to see what the effects of Rhodiola will be on these people’s mental and physical well-being. The participants suffered from high stress and ‘burnout’, which included sexual dysfunction.

By boosting stress resilience and antioxidants, Rhodiola helped to increase the subjects’ libido. [5]

This study ultimately shows us that Rhodiola may be particularly effective at improving sexual function in those suffering from mental health issues or cortisol-related burnout.

Mental fatigue often leads to brain fog and inability to focus. It makes everything harder – from simple daily tasks to performances at work and relationships with others.

Rhodiola clears brain fog by stimulating the nervous system to fight fatigue. Studies show it can even help the brain protect, repair and grow new cells.

One study from China looked at the effects of Rhodiola on neuronal growth in the hippocampus of depressed rats. These rats’ source of depression was chronic stress.

This particular study is highly correlated with how Rhodiola Rosea works in humans.

Interestingly, the number of neurons in the hippocampus of rats in the Rhodiola Rosea group recovered to a healthy level. The hippocampus is the area of the brain involved in mood, memory, executive functioning, and information processing.

The study concluded that Rhodiola Rosea may help save injured neurons. Additionally, it encourages the proliferation of brain stem cells in the hippocampus. [6]

Rhodiola is known for acting on the brain’s serotonergic pathways. This is suggested to be one of the main ways it reduces depression.

In one double-blind, placebo-controlled study, male and female subjects between 18-70 years old were recruited and split into three groups.

The effectiveness of Rhodiola extract for depression was assessed on the first and the last day (42nd) of the trial. Surprisingly, both groups that took Rhodiola saw significant improvements in their emotions, insomnia, depression, and overall life quality.

This study highlights the potential of Rhodiola for helping mood swings and depression. It also shows that lower doses of Rhodiola work just as well, if not better than the higher doses over the long-term. [7]

The bulk of the research we have on Rhodiola shows it not only boosts mental and physical condition, but could be particularly beneficial for female vitality.

A 2009 study found that Rhodiola Rosea helped women to have more energy and run faster compared to those who took a placebo. Another study found an improvement in concentration and reduction in fatigue in females who took a Rhodiola extract. [8, 9]

Rhodiola also has the potential to improve female fertility. Not only has it been shown to boost thyroid function but it can also improve egg maturation.

To highlight this point, one study recruited 40 women with infertility and amenorrhea and gave them 100mg of Rhodiola twice per day for two weeks. The result? Rhodiola helped restore normal menses in 25 females, 11 of whom conceived. [10]

As we’ve touched upon above, Rhodiola also boosts libido and sexual function. This is in part due to its cortisol-reducing properties, but also thanks to its ability to balance estrogen levels – leading to healthier hormonal balance overall.

Here’s a closer look at the studies behind Rhodiola Rosea and its effects on female health.

A study published in Phytomedicine compared the effects of Rhodiola Rosea to a prescription anti-depressant (Sertraline) for major depressive disorder.

Sertraline is known for treating panic attacks, anxiety, depression, and OCD. However, it comes with a wide range of potential side effects, among which are confusion, diarrhea, anorexia, and reduced libido.

The aim of this study was to assess if Rhodiola could offer similar benefits but without the side effects.

The researchers recruited 57 people suffering from clinical depression. One group of people took Rhodiola Rosea extract, another group took Sertraline, and the last group took a placebo for 12 weeks.

Researchers’ conclusion? While Rhodiola resulted in slightly weaker anti-depressant effects, it had a “more favorable risk to benefit ratio” overall for individuals with mild to moderate depression. [11]

Rhodiola’s biggest benefit is that it boosts energy levels. In a double-blind placebo-controlled trial, 161 cadets aged 19-21 years were given Rhodiola Rosea extract to see its effects on fatigue and stress.

Another objective of the study was to check if a higher Rhodiola dosage yields bigger benefits. Therefore, the cadets took either 2 or 3 capsules of the extract.

Study #3: Rhodiola Offsets the Impact of Stress on Performance

The goal of this trial was to assess the effect of consistent low-dose Rhodiola Rosea treatment on mental (and physical) performance in fatigued doctors.

To get more accurate results, the researchers tested the volunteer doctors before and after their night shifts for six weeks.

What did the results show, you ask? They found a statistically significant boost in cognitive functions during the first two weeks, as well as a reduction in their fatigue levels under stressful conditions. Interestingly, they reported no negative side effects from taking Rhodiola. [13]

Rhodiola has the potential to improve your body’s natural immune response to bacteria, viruses and other pathogens. A number of studies show different ways in which Rhodiola achieves this.

One study found that people who exercise hard may see a dip in their immune function. This is a period during which you’re more likely to, for example, get a cold or flu.

Rhodiola may help close this window, so to speak, by boosting your immune function at just when the body needs it the most. Aka, when it dips from stress or hard exercise.

In one trial, researchers recruited a group of Marathon runners and gave them 600mg of Rhodiola for a month before and one week after their race.

After this, the researchers took runners’ blood samples and infected them with viruses. Interestingly, these viruses spread more slowly in the runners who had been taking Rhodiola than in runners who hadn’t.

These findings suggest that Rhodiola may give your body an extra layer of protection against colds and viruses when the immune system would otherwise be compromised. [14]

Rhodiola Rosea’s anti-fatigue and anti-stress effects have been achieved at doses as low as 50mg per day.

However, doses of 100mg per day are generally shown to work best for long-term supplementation.

That said, higher Rhodiola doses don’t lead to more benefits. In fact, doses higher than 200mg per day may decrease some of its cognitive effects.

As a natural adaptogen, Rhodiola Rosea has been used in traditional medicines for thousands of years.

And looking at its chemical properties, it’s completely safe and non-toxic. You’ll rarely see people reporting negative side effects from using it.

Obviously, as with anything, ‘the dose makes the poison’. Taking much higher than recommended doses can lead to dry mouth, nausea, headaches, and insomnia.

Since Rhodiola has Monoamine Oxidase Inhibitory (MAOI) effects, it’s best not to combine it with MAOI drugs before speaking to your doctor.

Other than that, it’s perfectly healthy for daily use for most individuals.

How Does it Feel to Use Rhodiola Rosea Daily?

Most people start feeling Rhodiola’s energizing effects from the very first day they start taking it. However, this may vary depending on your genetics, lifestyle, and mental and physical condition.

For some people, it’s only after 2-3 weeks of daily use that they start to notice more profound changes in their mood and energy levels.

According to clinical studies, Rhodiola’s benefits peak at about 40-day mark for most people.

During this period, you should feel a significant anti-anxiety effect. The blues lift and overall well-being improve. Rhodiola Rosea should also help you stay more productive, as it helps to deepen focus and mental clarity.