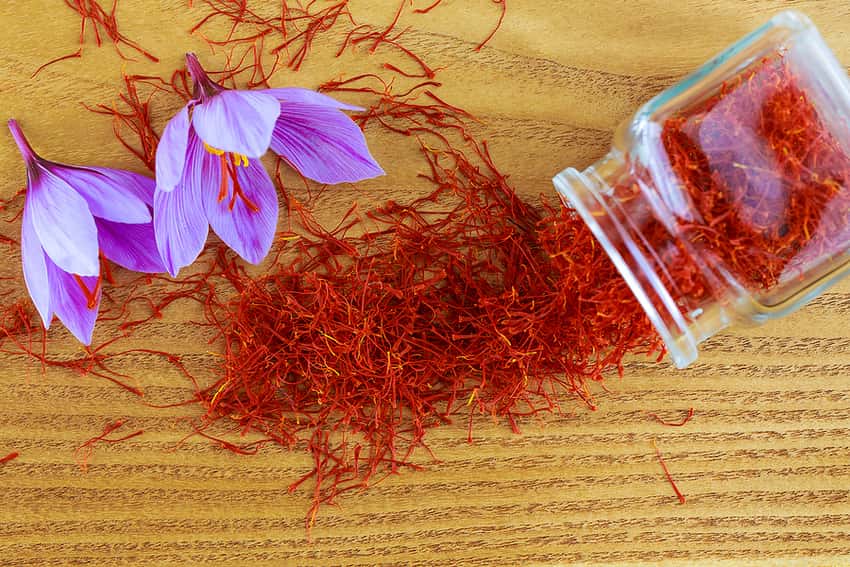 Saffron is a spice derived from the Crocus Sativus plant. It’s native to the Middle East, more specifically Iran.

Often called “the golden spice” and the “most expensive spice in the world,” saffron has earned this nickname because it takes a long time to grow and has to be carefully harvested by hand. To highlight this point, it takes 80,000 Saffron flowers to make 500g of the spice.

Its usage isn’t just for culinary purposes, though. Modern science shows Saffron can aid different aspects of health ranging from mood, anxiety, and stress all the way to energy, appetite and sexual function.

It’s a particularly effective for females looking to reduce PMS symptoms such as hot flashes, night sweats and irritability.

Some of the more interesting compounds in Saffron include crocin, picrocrocin, safranal, as well as antioxidants zeaxanthin and lycopene. Together, these provide a vast array of health benefits – some of them are even shown to help fight neurodegenerative diseases like Alzheimer’s and Parkinson’s.

How Does Saffron Work?

Saffron is commonly found in vision supplement formulas, and for good reason. In one trial with 100 patients suffering from macular degeneration, researchers found evidence that 20mg of saffron daily for 3 months improves eye function. [1]

Two additional studies confirm these findings. One of them lacked a placebo group, which means it should be taken with a grain of salt, but the other study, that was placebo-controlled, found saffron to improve retinal flicker sensitivity and overall eye health. [2, 3]

Scientists speculate that saffron’s effects come from its main compound crocin, which dilates your blood vessels and improves blood flow to your eyes. [4]

For over 4,000 years, saffron has been traditionally used to treat premenstrual syndrome, or simply PMS. Some of the common symptoms of PMS include cramps, acne, bloating and mood swings.

One study showed a significant reduction in PMS symptoms and irregular periods in a group of 35 women who were exposed to saffron odor for 20 minutes. [5]

The researchers speculate this is because saffron helps lower the stress hormone cortisol.

In another trial of 50 women, 6 months of saffron supplementation led to the same results. [6]

In 180 younger females, a supplement with saffron significantly reduced the duration and severity of their menstrual cramps. [7]

Medications such as antidepressants are notorious for lowering libido and causing pain during sex. In a clinical trial on 38 women, 4 weeks of saffron supplementation for 4 weeks improved their sex drive and reduced pain by increasing lubrication. [8]

Studies also observe the potential of saffron to improve sexual activity in animals. Again, this effect was facilitated by saffron’s active compound crocin. [9]

One of the common symptoms of Alzheimer’s is depression. It’s no secret that doctors commonly prescribe anti-depressants in these cases. These include drugs such as sertraline (Zoloft).

Researchers understand that this is despite the fact that these medications don’t work for Alzheimer’s and come with many side effects.

In a bid to find an alternative treatment, researchers set up a double-blind, placebo-controlled study with 46 Alzheimer’s patients. The subjects took either 15m of Saffron twice per day or a placebo for 4 months.

The researchers found evidence that Saffron produced a significantly better reduction in Alzheimer’s symptoms than a placebo. This led them to conclude that saffron is “both safe and effective in people suffering from mild to moderate Alzheimer’s”. [10]

Another drug that’s commonly prescribed to Alzheimer’s patients is donepezil (Aricept). This is an acetylcholinesterase inhibitor that increases the levels of brain chemical acetylcholine to improve memory and focus.

A long-term randomized, double-blind study with 54 Alzheimer’s patients was set up to compare Saffron with donepezil. The study subjects took either 15mg of Saffron twice daily or 5mg of donepezil twice daily for 22 weeks.

Interestingly, they found that Saffron extract was “effective similarly to donepezil in the treatment of mild to moderate AD.” What’s more, it didn’t cause the side effect of vomiting like donepezil. [11]

Interestingly, saffron has been shown to have a major effect on NGF, BDNF, and cAMP levels in the brain. This likely explains why saffron is so effective in alleviating anxiety and depression. [12]

In a 2018 study, 80 teenage volunteers with anxiety and depression took 14 mg of Saffron extract or a placebo for 8 weeks.

The study results showed a more notable reduction in social phobia, separation anxiety and depression in the Saffron group. [13]

Highlighting these findings was a clinical review conducted at Murdoch University in Perth. The researchers looked at every robust, high-quality human clinical trial that used Saffron, a placebo and antidepressants as controls.

The team found evidence that supports the use of “Saffron for treating mild-to-moderate depression.” (14)

To reap all of the Saffron’s benefits you’ll need to use more than a pinch of the spice. Studies show that Saffron can be beneficial for everyone, but even more so for women, when taken as a supplement.

Evidence suggests Saffron could be a natural alternative to some antidepressant and anti-anxiety pharmaceuticals. (15, 16) It can boost energy and vitality when taken in doses between 20-30mg per day.

In a study with 18-45-year-old women, Saffron was effective in reducing their post-partum depression. (17)

Another similar study showed that Saffron relieved depression and other symptoms of Premenstrual Syndrome (PMS) in women aged 18-45. (18)

For women who suffer from anxiety, Saffron can help by mitigating some of the physical symptoms. Including high blood pressure and tense muscles. It’s been shown in studies to act as a muscle relaxant and blood pressure stabilizer.

On the cognitive side of things, Saffron can enhance acetylcholine levels in your brain. This can help offset declining memory and learning. What’s more, Saffron blocks the build-up of amyloid plaque in the brain which could be involved in Alzheimer’s. (20, 21)

In terms of mood, Saffron has effects that could be on par with some popular antidepressants. (22)

Some of the symptoms of Parkinson’s are caused by the under-utilization of dopamine in the substantial nigra part of the brain. According to some studies, Saffron helps protect dopamine neurons in the substantia nigra. (23)

How does Saffron achieve this, you may wonder? It helps to boost oxygen and nutrient supply required for healthy eyes. More specifically, it boosts blood flow to choroid and retina in your eyes. (25)

In this study, researchers split 60 patients who were suffering from anxiety and depression into two groups. One group was given a placebo while the other group received 50mg of saffron twice daily for 12 weeks.

The study conclusion? “Saffron appears to have a significant impact on the treatment of depression and anxiety disorder.”  The researchers also noted that side effects were rare (26).

Study #2: Saffron May Help With Alzheimer’s

An increasing amount of evidence shows Saffron could aid in the management of Alzheimer’s Disease.

In a clinical trial from Iran, 54 Alzheimer’s patients who were 55 or older took part in this 22-week, double-blind study. They were randomly given either 30mg of Saffron per day or 10mg of donepezil (Aricept) daily.

The results showed that Saffron was on par with donepezil in terms of treating mild to moderate Alzheimer’s after 22 weeks. (11)

Additional research shows that Saffron may inhibit the accumulation of amyloid-β clusters in the brain. These are often associated with Alzheimer’s. Because they cause neurons to die off. (27)

46 people diagnosed with Alzheimer’s took part in a 16-week double-blind study. They took either 15mg of Saffron twice daily or a placebo throughout the trial. What did the researchers find?

They saw a significant improvement in cognitive function compared to placebo. Leading them to conclude that “at least in the short-term, Saffron is both safe and effective in mild to moderate Alzheimer’s”. (10)

What’s more, the study noted that saffron increased white blood cells without affecting other blood cells. Therefore, it could, in theory, selectively boost immunity without causing other blood-related complications. (28)

Some in vitro studies reported an inhibition of viral replications and entry into cells after saffron administration. This suggests that saffron can potentially improve the body’s ability to fight off infections. (29)

How Does it Feel to Use Saffron Daily

It might sound surprising, but one of the first effects you may notice from supplementing Saffron is a reduction in junk food cravings. It should also help with nighttime snacking and obsessive thoughts about food.

If you suffer from macular degeneration, saffron can help sharpen your vision. You may be able to see a line or two further down on the Snellen chart. Saffron is also effective at reducing glare during nighttime driving. Monitor flickering also tends to be reduced.

Although it may take a bit of time, saffron should gradually improve your mood over time. It should reduce over-reactions and work-related stress – helping you to feel like you’re in control.

Libido and energy are another aspects of female vitality that are generally shown to increase from supplementing saffron. You may notice that you don’t feel as tired or irritable.

Saffron’s optimal dosage is 30mg per day for enhancing mood and alleviating depression. This is perfectly safe and healthy for long term use.

Clinical studies have used up to 400mg of Saffron per day without any side effects. Some studies indicate that dosages up to 1,500mg per day could be safe, but remember that more isn’t always better.

Especially in this case, as some other studies noted toxic effects from taking more than 1,500mg of saffron per day.

Saffron is a very safe compound as long as it’s taken in recommended doses. Even water can become toxic in large quantities, and saffron is no exception!

Taking more than 1,500mg of saffron per day can lead to headaches and nausea in very rare cases. This is far more than 30mg of saffron in Kurapeak, which is a dosage that’s been shown as extremely safe for daily use in numerous clinical trials.

Saffron may be best known for its anti-depressant effects, but it’s just as potent at enhancing female health. We’re not just talking about energy and mood either; saffron is a surprisingly effective libido enhancer.

Maca, on the other hand, acts as an ‘adaptogen’. This is a class of compound that helps to lower stress in the body. At the same time, it brings balance to your other hormones, which can help with sexual function and enjoyment.

Combined in Kurapeak, Maca and Saffron make for a very effective duo that affects all aspects of female vitality – from boosting energy, mood, and memory all the way to reducing hot flushes, sweating, irritability and other symptoms of PMS.