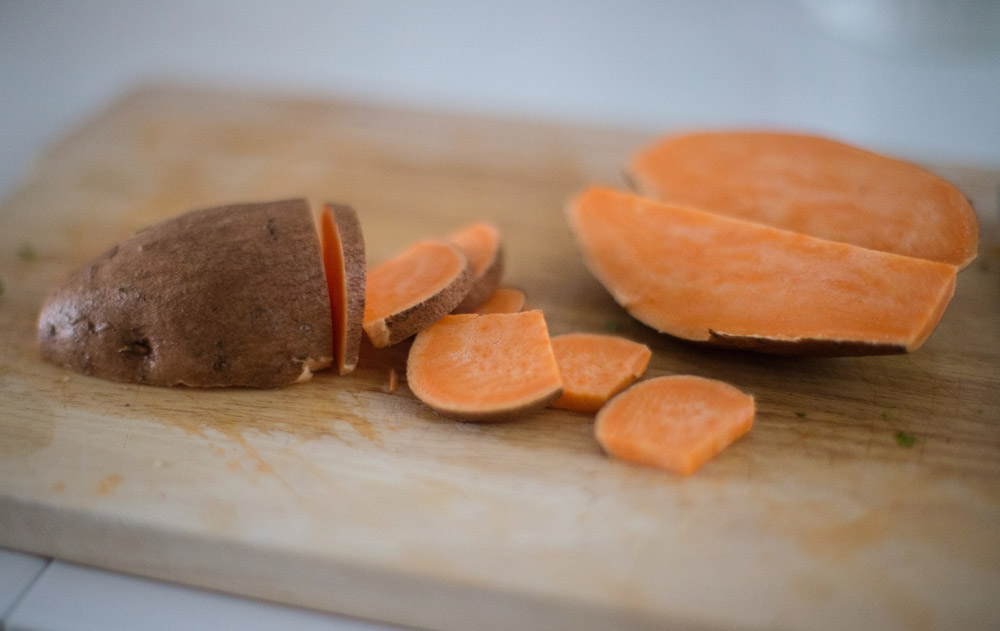 As carbohydrates in the modern diet were discussed, analysed and fought white potatoes and sweet potatoes were often pitted against each other. The one a beloved vegetable and the other an upstart, made famous by paleo diets as “safe starch” and lauded for its high levels of micronutrients. Recently, however, several of these preconceived notions were revised and the white potato has been readmitted to health food lists around the world.

As potatoes are from the nightshade family, these are excluded in autoimmune diets and eating plans but sweet potatoes are considered fine. (https://www.paleoleap.com/eat-sweet-potatoes/)

Nightshades also include tomatoes, peppers and eggplants along with 2000 other species. These plants contain alkaloids that can trigger inflammation in the body and lead to a variety of nasty symptoms including joint plan, autoimmune conditions, sleep disturbances, chronic diseases and are believed to cause premature aging and leaky gut syndrome. Some people are sensitive for nightshades, just like others are to gluten and could be described a nightshade-free diet to see if this is the cause of symptoms or illness. (https://draxe.com/nightshade-vegetables/)

In terms of nutritional value the biggest difference is that sweet potatoes contain very high levels of beta-carotene, a precursor to Vitamin A. but as for the rest they are fairly equal. The authors of Paleoleap however point out that as beta-carotene absorption is not optimal in the body and could depend on a variety of factors including how the vegetable is prepared, it is better to look at other sources like liver and eggs for a Vitamin A boost. (http://www.paleoleap.com) Both fall in the middle to high range of the glycaemic load scale. This is a measure of how fast sugar enters the blood.

The United States Department of Agriculture (https: //www. ndb.nal.usda.gov/) analysed the nutritional values of both:

Potatoes have more protein 4.3 grams vs. 2.3 grams in sweet potatoes.

The various colours of sweet potatoes, orange, purple and yellow,

Potatoes on the other hand contain “beneficial resistant starch” which doesn’t digest but ferments in the gut producing short-chain fatty acids. These help you stay fuller for longer, increase healthy gut bacteria, fight bad bacteria and increase absorption, decrease inflammation and decrease the risk of cancer. (https://www.precisionnutrition.com/sweet-potatoes-vs-potatoes-infographic) This is a market difference to the response the body has to junk food carbohydrates.

« Click for the latest top rated prebiotics »
~ The Top Prebiotics ~

A review of studies done on the impact of short-chain fatty acids and published in the journal Nature (http://www.nature.com/articles/nrendo.2015.128) stated that while most studies have been done on animals and data on humans are still being awaited. A connection between healthy gut bacteria, obesity and metabolic wellness are increasingly being made by doctors and researchers.

Both sweet potatoes and potatoes, according to a study published by the Royal Society of Chemistry are beneficial in that they are minimally processed meaning their structure increases a feeling of satiety and triggers a beneficial glycaemic response from the body. (https://www.pubs.rsc.org/-/articlelanding/2016/fo/c6fo00107f/unauth#!divAbstract)

The creators of the popular Whole30 diet at first excluded white potatoes but in a later edition of their book, It Starts with Food, included it except for French fries and potato chips, explaining that their real objection to the vegetable is the way people prefer to eat them – as chips and crisps. They reiterated that fries and crisps are ‘food with no brakes’.

In their foreword to their revised book, It starts with Food they wrote that potatoes are real nutrient dense foods and admitted that the vegetable was excluded from the popular eating plan in a slightly arbitrary way because of many people’s preference to eat them as fries or crisps. The authors said they have changed their minds and eating potatoes mashed, baked and roasted was ok.

While both vegetables are prepared in a variety of ways, including baking, frying, boiled and roasted experts at Precision Nutrition advises to eat more dishes that a boiled, roasted, baked, prepared with olive oil and herbs and topped with salt and less frequent of the rest.

They however cautioned that as potatoes contain a lot of energy in small amounts of the vegetable it was still not advised for the overweight, insulin resistant or people with metabolic problems. (http://bit.ly/whole9iswf)

One of the reasons for the bad rap that potatoes have received in the past few years was the rise of the paleo diet – where the vegetable was the subject of a number of highly contentious discussions.

Sweet potatoes, long being a darling of the paleo- and caveman diet worlds were considered the ‘safe starch’.

In a note on the subject, the authors of Paleoleap (http://www.paleoleap.com) said while both are starchy vegetables and should be avoided by people with diabetes, metabolic disorders or those who want to enter ketosis, the potatoes should not be grouped with ‘junk food’ and should not be excluded from diets just because it is a high carb vegetable.

Sweet potatoes are also not considered a suitable carbohydrate for the ketogenic diet which excludes both white and sweet potatoes.

The American Diabetes Association recommend the consumption of starchy vegetables, both potatoes and sweet potatoes, as part of a healthy diet but warns against deep frying and advise combining potatoes with a lower GI food. (http://www.diabetes.org/food/what-can-i-eat/understanding-carbohydrates/glycemic-index-and-diabetes.html )

Precision Nutrition advises no more than a cupped handful or two of both potatoes and sweet potatoes and adjusting for activity levels, weight goals and blood glucose control.